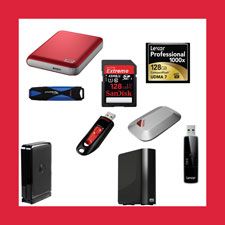 The market for secure image data storage and transfer options has expanded exponentially since the dawn of the digital revolution and is accelerating at breakneck speed. With the majority of today’s point-and-shoot cameras capturing 12 to 16MP files, and many APS-C-format and full-frame DSLRs equipped with 18 to 36MP sensors, the explosion in digital data has created a robust market in ingenious, effective devices and services that allow consumers to conveniently store, protect, transfer and organize the huge amount of data that is, in effect, their precious memories.

To give you an overview of this burgeoning marketplace, we’ve created this concise guide to the leading image storage/transfer options, and a basic description of some tech-forward products and services in each category. Obviously, we can only scratch the surface of this varied industry segment in this small space, but we hope that simply knowing what’s out there will help you understand and serve your customers better—and maybe suggest some profitable new revenue streams.

Flash Memory Cards
Savvy dealers know that it’s cool to carry cutting-edge, high-capacity, high-speed SD and CF flash memory cards—value-added items. However, a surprising number of photographers—especially enthusiasts and family shooters—use memory cards as primary image storage devices. In other words, they save and file the cards themselves as a backup even after transferring the images to a hard drive or other device. While memory cards are a pretty expensive way to store images, saving that 32GB card with that once-in-a-lifetime overseas trip on it is not such a bad idea. The chances of having a card “go bad” is infinitesimal, and it’s actually an effective means of long-term file storage. Here is a short selection of high-tech cards from SanDisk and Lexar. Other major makers include Sony, Kingston and PNY.

Lexar Professional 600x SDXC UHS-1 Cards. These UHS-1, or Ultra High Speed 1 cards, have a read/write speed up to a claimed 600x (90MB/sec), can withstand temperature and humidity extremes and include downloadable Image Rescue 4 software to recover lost or deleted photos and video files. They’re designed to capture high-quality images and extended lengths of 1080p Full HD video with any SDXC-compatible DSLR, HD camcorder or 3D camera, and they carry a full lifetime warranty. 64GB, $349.99. lexar.com

USB Jump Drives and Pen Drives
These pocketsize USB devices are handy for transferring image files and/or providing temporary storage capability that enables consumers to download images and reformat their memory cards. In keeping with the inexorable trend toward larger files, the storage capacities and throughput rates of these devices are rapidly increasing, with a number of USB 3.0 models (they’re backward compatible to USB 2.0) capable of delivering read/write speeds of 150MB/sec and storing up to 128GB of data. Jump/pen drives are seldom used for long-term file storage, but this reflects their use profile rather than technical limitations. Here’s a short selection.

Kingston Data Traveler HyperX 3.0. This high-capacity USB 3.0 unit is backward compatible with USB 2.0, has an ultra-fast read speed up to 225MB/sec and a 135MB/sec write speed, features eight-channel architecture and will stand up to extreme temperatures. The write speeds allow users to work on large files or apps directly from the drive without performance lag. It comes with ReadyBoost 24/7 tech support and has a lanyard loop for convenient carrying. 64GB, $135; 128GB, $252; 256GB, $549. kingston.com

Portable Hard Drives and Transfer Devices
Technically, any backup hard drive, including the one plugged into your desktop computer, is portable enough to pack in a medium-size camera bag, but there are also compact units that are even smaller and lighter and typically carried in the field by pros and serious photographers or used for long-term storage. These can be carried alone or used with portable transfer devices that make it more convenient to transfer large files faster. Here are some examples of both.

SanDisk Memory Vault. This flat minimalist device is designed to protect and store image and video files for 100 years, and to secure safe, permanent storage the Vault limits the number of times it can be erased and refilled, allowing users to add files up to its capacity but not to erase them. As it approaches maximum storage capacity, an LED gradually blinks faster using Chronolock technology, and once it’s full it switches to read-only mode. 8GB, $49.99; 16GB, $89.99. sandisk.com

SanDisk ImageMate All-in-One USB Reader/Writer. This ingenious USB 3.0 device is a multiformat card reader and writer that can transfer data at a blistering 500MB/sec. It has four card slots and supports formats that include UDMA 7-enabled CF, SDHC, SDXC and UHS-1. It is backward compatible with USB 2.0 and includes a detachable metal stand. $49.99. sandisk.com

Computer Backup Hard Drives
These plug-in high-capacity image file storage devices are usually attached to a computer semi-permanently to automatically back up all image and video files. Generally they can store enormous amounts of data—typically 1TB to 3TB (that is 1,000 to 3,000 gigabytes) and constitute the ultimate user-controlled on-site backup system for intermediate and long-term storage. Here are two examples.

Western Digital My Book Essential External Desktop Hard Drive. This sleekly styled USB 3.0 drive provides automatic continuous backup at transfer speeds up to 5GB/sec, is compatible with USB 2.0, includes WD SmartWare software that provides a visual display of the backup as it happens, and features password protection. It’s preformatted with the NTFS file system for Windows but will also support Mac via reformat (USB 2.0 only). 1TB, $99.99; 1.5TB, $109.99; 2TB, $129; 3TB, $169. wdc.com

Saving Files of Another Kind
At least one postproduction software system allows photo enthusiasts to save the settings used to enhance and modify specific images, either as a “recipe” for use with future images or tagged to a specific image file. A good example is Tiffen Dfx v3, which lets users go back and apply the settings after ending an editing session and store or share those settings, either in the Dfx software itself or posted to the Cloud along with the finished files. Pretty cool!

Thunderbolt. While this technology has not quite reached mainstream, we wanted to at least mention it as the next transfer interface technology predicted to overtake USB 3.0. Thunderbolt technology brings a new way to connect high-speed storage devices to any desktop or notebook computer with a Thunderbolt port while delivering unmatched speed for multitasking activities such as editing video/music, 3D rendering and completing other high-definition graphics-intensive projects.

Cloud Storage Services
Being able to access files from anywhere and from a computer is awesome, and most online storage services let users share theses files selectively with friends and associates. Obviously security is a crucial aspect of this, and keeping data safe should be a top priority. Monetizing the cloud can pose a challenge for retailers as most current sales are placed via direct online orders. However, where there’s profit potential there’s a way, and we look forward to some ingenious retail business models that will put your profits on Cloud 9. Herewith are a few services said by their users to have good track records.

Windows Live Mesh. It’s part of Microsoft’s latest venture into cloud computing, and it gives users 5GB of free storage and a desktop that looks like Windows Vista. As yet you can’t edit files, but that may be coming. It works on PCs and Macs, and users can run programs and browse all the files on their computers from anywhere by connecting remotely. microsoft.com

Dropbox. Well known and well tested, it requires users to install a small program, but it integrates very well with a user’s desktop. They can upload any type of file smaller than 350MB, and 2GB of free storage is provided. With the Dropbox free service, users can bring photos, docs and videos anywhere and share them easily. Several users on the same account can remotely share copies of files in the Dropbox while still maintaining them on their hard drives. An upgrade to 50GB is $9.99 a month or $99.99 per year, but the company offers lots of opportunities, like scavenger hunts, to upgrade capacity for free. dropbox.com

Oosah. Its main selling point: Users get a whopping 1 terabyte of storage, but they can’t use it for text documents, spreadsheets, presentations, etc. It does accept RAW images from most camera systems and automatically converts them to JPEGS, and it lets users connect to Picasa, Flickr, Facebook and YouTube accounts, and view these services in one place. Downsides: Uploading files can be challenging, and you can’t upload multiple directories simultaneously even with a web-based uploader. crunchbase.com/company/oosah