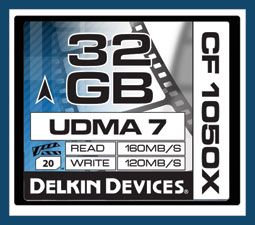 Poway, CA—Delkin Devices added to their lineup of CompactFlash (CF) memory cards with the introduction of the CF 1050x UDMA 7 Cinema memory card. With improved read and write speeds, Delkin’s 1050x Cinema card is engineered to guarantee “smooth, continuous recording and playback on DSLR cameras,” especially those that record in UltraHD 4K.

The new CF 1050x is a specialized cinema memory card designed to excel in high-end recording equipment, such as 4K cameras and digital backs. Capable of recording data at speeds up to 120MB/sec, it is Delkin’s fastest card to date.

“With 4K being adopted more each year, there is a growing need among filmmakers for memory cards that are fast enough to smoothly capture UltraHD video footage,” said Anna Lopez, Delkin’s Marketing manager. “With Delkin’s CF 1050x Cinema cards, filmmakers can confidently know that all of their footage will be captured in its entirety, without dropped frames.”

The 1050x card is approved to work in high-end cameras that support 4K UltraHD recording, such as Canon’s EOS-1D C and C500. To record footage in 4K at 24 frames per sec, the Canon 1D C requires memory cards that are UDMA 7 and have a minimum write speed of 100MB/sec. Cards with a write speed less than 100 MB/sec will either drop frames during filming or stop recording. The 1050x also works on digital file recorders, like AJA’s Ki Pro Mini.

With a read speed of 160MB/sec, the CF 1050x card is also said to save time. “As the file size for 4K footage is significantly larger than 1080p, our cards are built to transfer files quickly and efficiently, so that you can utilize your time to the fullest. No longer will you have to wait hours before you can start editing footage,” added Lopez.