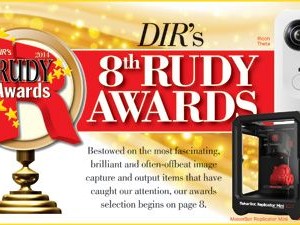 In honor of the late, irrepressible and charming Rudolph Maschke, who cofounded Photo Industry Reporter (now Digital Imaging Reporter) along with his lifelong friend and business partner the late, great Ed Wagner, we hereby present the 2014 Rudy Awards. The awards are bestowed on the most fascinating, brilliant and often-offbeat image capture and output items that caught our attention.

Maschke, known to his countless friends and associates in the imaging industry as Rudy, was universally admired for his sagacity, wit and ironic deadpan humor, as well as his business and marketing acumen, and it is in this spirit that our editors have selected the items below.

Ricoh Theta Pocketsize Panoramic Camera
The size of an elongated smartphone, this amazing 360º panoramic camera is compact, easy to use and compatible with iOS apps (Android support is on the way). Bundled with a pouch that includes a belt loop, it employs a lens comprised of two symmetrically opposed hemispherical elements that capture a full 360º field. There’s no built-in display or manual settings, except for +/-2 EV exposure compensation in 1/3-EV steps. Users can capture images to its internal memory or transfer them to an iOS device connected via the ad-hoc Wi-Fi network. And the connected device can be used as a remote shutter release. Images are captured at a fixed aperture of f/2.1, auto shutter speeds span from 1/8,000 sec to 1/7.5 sec and auto ISO settings range from ISO 100–1600. Its 4GB of internal memory is good for 1,200 images. The Theta measures 1.65×5.08×0.9 inches and weighs 3.35 ounces. $399. theta360.com/en

Steadicam Solo Stabilization Device
This is Steadicam’s latest, hybrid three-axis gimbaled image-stabilization device for shooting smooth shake-free video with DSLRs and camcorders. And it’s the first one that combines a hefty 10-pound load capacity and also converts to a sturdy monopod for shooting from confined spaces. Claimed to provide superior stabilization by virtue of computer-aided design (CAD), finite element analysis (FEA) and an ultraprecise manufacturing machining, it folds to a compact 25×6 inches. Other features include: an ergonomic foam handle and control grips; a four-section, telescopic post to enhance comfort and control for long shoots; a quick-release mounting plate; a push-on lock and pushbutton release; positive position clamping; dual knobs for fore-aft vernier adjustment; and 1/4×20 and 2-3/8×16 camera-mounting screws. The Solo is upgradeable to a complete system by adding a sled, arm and vest. $499. tiffen.com

Nikon 1 AW1 Waterproof CSC
The only interchangeable-lens camera that’s submersible to 49 feet, shockproof enough to withstand a 6.6-foot drop and freezeproof to 14ºF without a special housing, it’s ideal for underwater shooting, hiking and other rough-and-tumble outdoor activities. Part of Nikon’s CX-format series of compact system cameras, the 14.2MP AW1 has all the series’ bells and whistles, including excellent responsiveness and a 15-fps high-speed burst rate with AF tracking and a blistering 60 fps with focus locked. Distinctive features include built-in GPS, an electronic compass, a depth gauge, a virtual horizon display, a 3.0-inch LCD and compatibility with the optional WU-1b wireless mobile adapter. There are underwater options—standard, scuba and close-up—as well as underwater white balance and distortion control. Plus, its action control function makes navigating menus easy via a tilt of a gloved hand. $799.95 with AW 11–27.5mm lens. nikonusa.com

Davis & Sanford Attaras 4M Convertible Tripod
We’ve seen tripods with removable center posts before, but what makes this ultralight (4.6 pound) aluminum beauty really ingenious is its combination of versatility, convenience and stability. The center post lifts out in an instant with no unscrewing required to become a remarkably sturdy and stable full-size monopod, and its fully adjustable four-section snap-lock legs can be easily positioned to provide full grounder capability (minimum height, 22 inches) for easy video shooting. Other features include: three-position, 26.5mm independent leg adjustments; a pro-caliber BQ11 ball head with quick release; and a hefty 11-pound load capacity. The Attaras 4M extends to 68 inches and folds to a portable 24 inches. $120. tiffen.com

Liquid Image Ego LS Action Cam
Wearable and mountable, this HD camera boasts four wireless features—4G LTE, Wi-Fi, Bluetooth and Low Frequency RF—to transmit video (1080p at 30 fps/720p at 60 fps) and 8MP photos. Its wireless stream can pass through a cloud service or to social network sites, and it connects to iOS/Android devices via Wi-Fi using the free Liquid Image app. The app can be used to stream live view to a mobile device, view recorded files, trim clips, transfer files, adjust camera settings or use the device as a remote control to activate the camera. Bluetooth allows it to connect to peripheral devices, like biometric monitors, so the camera can record metadata from them. 4G LTE applications include live streaming beyond the range of Wi-Fi, and Low Frequency RF lets the camera remain in standby mode, conserving the battery. It ships in June. $199.99, Ego LS without 4G LTE module; $399.99, Ego LS with 4G LTE. liquidimageco.com

Intel Edison SD Card-Size Computer
It’s a real, full-functioning computer based on Intel’s 22nm Quark technology that’s built into an SD card form factor, complete with cut corner. It’s designed for ultra-small, low-power “Internet of Things” devices and wearable computing applications. The programmable microcontroller can manage I/Os and other baseline functions while the x86-compatible processor core supports Linux and enables multiple operating systems to run sophisticated applications. Connectivity includes Bluetooth and Wi-Fi, and the board can be designed to work with most devices—not just phones or camera, but coffeemakers. Potential uses of the Intel Edison include: connecting marginally connected legacy devices via Wi-Fi and upgrading their capabilities; connecting cameras to automatically upload tagged pictures for processing and posting to production websites; enhancing Cloud computing using the spare processing capacity built into smartphones; or even supplanting smartphones with a network of tiny computers. Price: TBA. intel.com

MakerBot Replicator Mini 3D Printer
While the fascination with 3D printers and their potential continues to grow, consumer models haven’t reached the level of reliability, ease of use or affordability consumers expect. But the fifth-generation MakerBot Replicators are aim squarely at changing that, including the Replicator Mini compact 3D printer. The Replicator Mini is an easy‐to-use 3D printer targeted at everyone. It’s just right for smaller spaces such as college dorm rooms, classrooms, multi‐workspaces and the home. Optimized for speed, it features: easy one‐touch 3D printing; a maximum build volume of 3.9×3.9×4.9 inches; plug‐and‐play features; a build plate that requires no leveling; and it produces a default 200‐micron layer resolution in prints. It also comes with downloads of free MakerBot Verified and ready‐to‐print 3D models from thingiverse.com, MakerBot’s 3D design community. The MakerBot Replicator Mini is expected to retail in spring 2014. $1,375. makerbot.com

Sony Cyber-shot QX10/100 Lens-Style Cameras
Mounted on a smartphone with their clamps, both DSC-QX cameras look like attachable lenses, but they sport their own high-performance Exmor R CMOS sensors, Bionz processors and optical zoom lenses, essentially enabling the phone to snap the better quality images of a compact digital camera. The two can connect via NFC, though image transfer is via Wi-Fi. This also means they can work separately, since the phone can act as both a viewfinder and remote shutter using Sony’s PlayMemories app. Images can be saved on both the phone and the camera itself, which has its own microSD card slot. The 18MP QX10 has a 10x optical zoom Sony G lens, while the QX100 has a 3.6x optical zoom but a larger 20.9MP sensor and a better lens (f/1.8–4.9 Carl Zeiss Vario-Sonnar T*). $249.99, DSC-QX10; $499.99, DSC-QX100. sony.com

DJI Spreading Wings S800 Evo Drone
One imaging category getting a lot of attention is visually enabled remote-controlled drones. Most have cameras simply so they can be moved within the space they are operating, but some are equipped with premium cameras to capture high-resolution images. In most cases, they are controlled by iOS/Android devices via Wi-Fi, and images are transferred wirelessly back to those devices for local or cloud storage. It was a tough choice, but the drone we went with is a higher end model. DJI, the company that developed the popular Phantom 2 Vision flying camera, announced a professionally targeted drone, the Spreading Wings S800 Evo. This hex-rotor model is specifically designed for serious photography and videography. Rather than just carrying a small Wi-Fi enabled videocam, it carries serious digital cameras, like the Sony NEX-7 or Panasonic DMC-GH3. It comes with a Zenmuse gimbal for a high degree of image stabilization and smooth position control, and retractable landing skids make it possible to get a 360º field of view. $2,999. dji.com