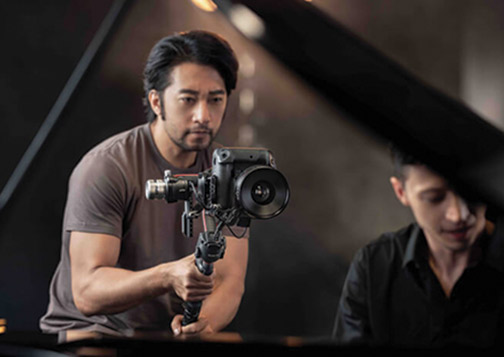 The DJI RS 2 brings added strength and agility to creators using heavier camera systems, such as DSLR and compact cinema cameras. Conversely, the DJI RSC 2 was made for more portability to meet the needs of mirrorless and more compact camera operators.

“DJI’s first Ronin-S and the original Ronin-SC created so much excitement when they launched that we immediately went back to the drawing board to figure out how to make our products even better,” said Paul Pan, senior product line manager. “Just like with the first version, we took time to research how our professional customers use their Ronin products as well as what new features they wanted in the next generation of a handheld gimbal. Yet again, the result is the culmination of user feedback, years of design and development, and significant advancements in stabilization technology.”

As a result of feedback from professional operators, the DJI RS 2 incorporates carbon fiber in vital structural components. This reduced the weight down to 2.86 pounds while maintaining durability.

Pushing single-handed gimbal technology even further, the DJI RS 2 now supports a tested dynamic payload of 10 pounds. It also achieves up to 12 hours of battery life. Moreover, a new quick-charge function was added directly to the battery handle for urgent situations. This option provides an extra two hours of battery life with a 15-minute charge.

To capture smooth cinematic footage, DJI leveraged predictive technology to create a newly optimized Titan Stabilization algorithm. It reduces the need for manual user input while compensating for user movement and optimizing the gimbal tilt and angle. In addition, a new SuperSmooth mode provides another level of camera stability, especially for compensating for focal length lenses of up to 100mm.

DJI also created the RS 2 to allow filmmakers to adapt their systems to their filming needs. Axis locks enable easier transportation as well as balancing. What’s more, a dual-layer camera mounting plate is compatible with the Arca-Swiss and Manfrotto standards.

Another improvement is a fine-tune balancing knob that allows for more precise balancing of the payload. Furthermore, a built-in 1.4-inch color touch screen displays camera data, gimbal settings or a live feed from the camera. The screen can also initiate key functions such as ActiveTrack and intelligent shooting modes.

A front dial above the trigger also enables more precise focus control; it complements a DJI focus wheel mounted on the RSA port. Consequently, two-channel focus and zoom are available.

Users can also attach the DJI RS 2 to other systems, such as jibs, car attachments and sliders. Two RSA ports double as NATO ports so filmmakers can mount accessories and attachments, like grips and a remote controller.

The stand-alone DJI RS 2 has a retail price of $849. The Pro combo includes additional accessories, such as a phone holder, focus motor, RavenEye image transmitter and carrying case. It is priced at $999.

With a new portable folding design, the DJI RSC 2 makes it easy for creators to carry it everywhere without adding additional weight to the gear list. In addition, the folding design provides creative ways to use the gimbal. These include vertical filming without additional accessories; as well as a new briefcase mode where the main gimbal arm is loosened and slung forward to provide unique shooting angles.

Moreover, DJI used steel on vital and frequently used components; while lightweight materials such as aluminum reduce overall weight. The DJI RSC 2 weighs in at 2.65 pounds, nearly 35% less than the original Ronin-S. It also boasts a folding footprint of 180×190mm, the same size as a sheet of A5 paper.

Notably, though portable, the RSC 2 features stronger motors to support a tested payload of up to 6.6 pounds. This increased dynamic payload supports popular mirrorless cameras along with heavier combinations like the Panasonic S1H and a 24–70mm lens.

It also employs the new Titan Stabilization algorithm to generate more stability. In addition, the gimbal is compatible with a range of camera models. Other features include axis locks for easier transportation and balancing; a dual-layer camera mounting plate compatible with the Arca-Swiss and Manfrotto standards; and an OLED screen that displays camera data with the ability to adjust settings directly.

What’s more, the DJI RS 2 and RSC 2 expand on their predecessors’ suite of creative modes, movements and features. New tools include Time Tunnel, which performs 360º roll while capturing a hyperlapse. With Flashlight, the system tilts the camera all the way forward so users can grip the base like a flashlight. And in One-Tap Portrait mode, the gimbal orients the camera into vertical shooting for social media content. Other modes include panorama, roll 360 and timelapse.

For remote operation, both use ActiveTrack 3.0 when the RavenEye image transmission system is connected. It sends a 1080p/30-fps low-latency feed to a mobile device using the Ronin app from more than 650 feet away.

Via the Ronin app, users also can control and adjust vital features and functions over long distances. For example, they can control gimbal movement using the virtual joystick and force mobile, where the gimbal mimics the mobile device’s movement.