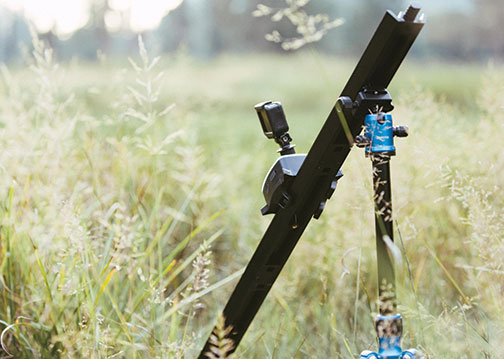 Dyno announced that since it is priced less than the cost of similar professional systems, Trek is affordable for both professional and hobbyist video makers. An Indiegogo campaign with a funding goal of $50,000 features limited early bird specials for the Trek basic kit at $199. This is priced at 33% off of retail. Also offered are several other rewards for early backers.

Trek features a portable design and is built with Magnetic Quick Connect technology. This patent-pending track connection system is designed to allow users to go from packed up to fully assembled in seconds. The completely tool-less system permits users to spend less time setting up and more time getting shots.

Engineered to be stable on any surface, Trek’s legs are designed to help ensure the slider will remain secure. Also, the patent-pending design of the shuttle allows for movement on any incline, from horizontal to completely vertical and upside down. In addition, the universal mount on top of the shuttle supports all cameras under one pound. However, the full kit weighs just 2.5 pounds.

“After searching high and low for a modular, motorized camera slider that was cost-effective and easy to use, we soon realized that such a product just did not exist,” said Chris Szczur, CEO and cofounder, Dyno Equipment. “Most of the products on the market are made for larger cameras and are too expensive, bulky and complex. By reimagining the technology, we have been able to create a product that anyone can use anywhere, anytime.”

Partially funded by Clarity Design, a full service design and manufacturing firm, Dyno Equipment has molds, supply chain and packaging for the Trek system already in place. This will ensure that once funding goals are reached, production will begin immediately.

The slider system is Bluetooth capable. Users can wirelessly control the shuttle from up to 100 feet. In addition, it has a battery life of 20+ hours on a single charge. It also has a wide speed range, with live motion control between 1 and 36 inches per minute.

In addition, the system supports long exposure filming as well as night-lapse videos. Other features include water- and weather-resistant construction as well as tripod attachment via standard 1/4-20 mounts for incline shots.

Headquartered in San Diego, California, Dyno Equipment is a start-up whose mission is to change the way professional and hobbyist video makers create content. Trek is its flagship product. In addition, as a member of “1% for the Planet,” the company’s strives to not only help content creators create but also help improve the environment. dynoequipment.com