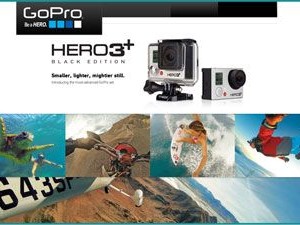 San Mateo, CA—GoPro’s new Hero3+ action cameras sport a 20% smaller and lighter design and 30% better battery life than previous models. These upgrades, combined with an improved lens and new video capture modes, produce the most advanced and easy-to-use GoPro yet.

GoPro is a pioneer in enabling a new era of self-documentation whereby people can wear or mount miniature ultra-wide-angle cameras to record themselves doing just about anything, anywhere. An average of three GoPro “tagged” videos are uploaded to YouTube every minute, according to GoPro, and its Hero3 camera has also been the best-selling camera to professional production companies, on a volume basis. The National Academy of Television Arts & Sciences recently awarded the Hero3 an Emmy for its contributions to filmmaking and television production.

“The Hero3+ illustrates GoPro’s commitment to innovation. We took the world’s best-selling ultracompact camera and made it better because we’re relentless in our pursuit of delivering the best possible user experience to our customers,” said Nicholas Woodman, founder and CEO of GoPro. “We saw that we could make the Hero3+ significantly smaller and lighter while at the same time increasing battery life 30%. We saw the opportunity to design a sharper lens, so we did it—improving GoPro’s already highly regarded image quality. And we thought up exciting new features like SuperView, which enables the world’s most immersive wide-angle video. These are all features that we as passionate GoPro users want for ourselves, and we’re excited to share them with our customers around the world.”

Hero3+ Black Edition. Offering a 20% smaller and lighter overall package when installed in its housing (waterproof to 130 feet), the new cam has four times faster Wi-Fi speeds for quicker transfer and playback of photos and videos to a mobile device via the GoPro App. It also features SuperView, a new video mode that captures immersive wide-angle perspectives; auto low-light mode that intelligently adjusts the frame rate for varying lighting conditions; and a new lens for sharper video and improved image quality. $399.99.

Hero3+ Silver Edition. With an image processor that is two times faster than the Hero3’s, the Silver Edition cam enables 1080p 60-fps and 720p 120-fps video. In its new housing, it yields a 15% smaller and lighter overall package and is waterproof to 130 feet. It, too, provides four times faster Wi-Fi speeds. $299.99.

New Mounts and Accessories
GoPro mounts and accessories are key to enabling the life-capture creativity of millions of GoPro customers around the world. GoPro announced several new mounts, including:
•    Jaws Flex Clamp – A quick way to clamp a GoPro to a various objects. The optional opposable neck can be used to achieve a wide range of camera positioning and adjustability, and Jaws securely grips irregular shapes and slim objects.
•    Junior Chesty – A smaller version of GoPro’s adult-size chest harness for kids ages 3+.
•    Headstrap + QuickClip – A new accessory that comes bundled with GoPro’s Headstrap, the QuickClip enables ultracompact, low-profile mounting to baseball hats, belts and other objects ranging in thickness from 3–10mm.
•    GoPro Studio 2.0 – This storyboard-based video-editing software for Windows or Mac enables users to manually create a video with transitions, titles and soundtrack, or now use GoPro edit templates—customizable templates of some of GoPro’s best videos made available for free. Users can drop their own GoPro clips into the premade edit template and add included soundtracks. gopro.com