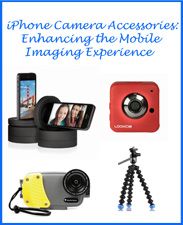 In recent commercials, Apple hasn’t shied away from pointing out that more photos are taken on iPhones every day than on any other camera, thus making it the most popular point-and-shoot in the world. How people shoot those images can vary pretty widely when all the photo accessories for Apple’s handsets are taken into account.

Many of the newer accessories aim to improve image quality by either offering a better grip, automated performance or more variance to the built-in lens, all of which is presented by this group of options.

Mounted on a smartphone with their respective clamps, both DSC-QX cameras look like attachable lenses, but they sport their own high-performance Exmor R CMOS sensors, Bionz processors and optical zoom lenses, essentially enabling the phone to snap the better quality images of a compact digital camera. The two can connect via NFC, through image transfer is via Wi-Fi. This also means they can work separately, since the phone can act as both a viewfinder and remote shutter using Sony’s PlayMemories app. Images can be saved on both the phone and the camera itself, which has its own microSD card slot.

The Kick is a five-row LED light panel that offers adjustable color temperatures ranging from 2,500 to 10,000 Kelvin. Pocket-size and Wi-Fi compatible, the Kick can be managed and controlled via a free app to fine-tune color, hue and intensity for more precise effects. The light can also mimic lighting patterns from an existing photo or video, in addition to using built-in settings for flashes, strobes and flickers.

It runs on its own lithium battery, rechargeable via USB. It can mount on any iPhone, from the 4 to the 5s and 5c, or can be used with an iPad and iPod touch. There is a standard tripod mount underneath for stationary use as a fill-light or remote flash. $179. photojojo.com

The olloclip has always been a 3-in-1 lens attachment for the iPhone, but it now adds a fourth with an extra macro lens. The 10x and 15x macro lenses are coupled with the fisheye and wide-angle lenses that have always been standard with olloclip. The 10x macro has a focus distance of 18mm, while the 15x goes even closer to 12mm. As always, it attaches to the corner of the phone and works with any photo app, despite the fact olloclip also now has its own.

There are two versions: one for the iPhone 4 and 4s, and another for the iPhone 5 and 5s. The iPhone 5c is not officially supported because its plastic body has a slightly different form factor. $69.99. olloclip.com

Part lens system, part case and camera grip, the American-made Orbit Pro uses what’s called Peripheral Motion Lock technology to essentially rotate three different lenses on a spindle. The lenses are made up of a 180º fisheye, 0.67x wide-angle and macro, plus a 2x zoom configuration. The aluminum case offers durability and protection and has three tripod mounts placed in different spots for multi-angle options.

The Galileo turns the iPhone into a remote controlled video or still camera with a 360º rotation. It mounts the phone in landscape, and the angle can then be adjusted either manually or automatically through the use of a second iOS device and the dedicated Sphere app. Sphere can capture 45 images in one full rotation, stitching them together for full panoramas.

Other apps will be compatible with the Galileo for other use cases that include home video monitoring and time-lapse photography, among others, with an open API for developers to add functionality to it. $149.99. motrr.com

The Quik Pod has become well known as a user-friendly monopod that enables easier self-photography, and when the Quik Pod Pro is coupled with the Mobile mount, the duo make it easy to use the iPhone for the same purposes. With universality in mind, the Mobile mount can fit any iPhone, regardless of size, while the Pro monopod can extend up to 20 inches in length (only 7 inches when closed).

The small mirror below the camera mount does help align and frame a shot, though it isn’t always a foolproof solution. As there is no shutter button to work with the phone, self-timers would have to be used on photo apps. $39.99, Quik Pod Pro and Mobile bundle. quikpod.com

This camera performs what’s called “lifelogging,” otherwise known as continuously capturing still images or video through a wearable first-person perspective. Clipping onto a jacket, bag strap, belt or something else to keep it in place, the Looxcie can record 720p video directly to a microSD card or stream it in 480p to an iPhone via a direct Wi-Fi connection and dedicated app. Live streaming to Facebook is also possible.

Both recording and streaming can be done simultaneously, and an “instant clip” button records the last few seconds, even if recording was turned off initially. Battery life is fairly low at two hours. $99.99. looxcie.com

The familiar JOBY tripod with flexible legs is complemented by an adjustable smartphone grip at the top and magnetic feet that can attach securely to any ferrous metal. Being adjustable, the rubberized grip can handle iPhones with cases, negating the need to take them off before setting up. The magnetic feet are sturdy, adding yet another unique surface, like a metal pole, to the other positioning options courtesy of the legs.

The tripod itself only weighs 80 grams and can be compressed for easier storage, while the GripTight can also be removed to screw in a small flash or point-and-shoot camera for more intricate photography. $34.95. joby.com

Not to be confused with a standard waterproof iPhone case, this underwater housing made of polycarbonate not only protects the phone but also increases its depth and range. It can go down to 195 feet deep and has a wide-angle lens with a field of view of 110º, though it also does come with a second flat lens. The yellow grip can be removed for other separately sold colors, if preferred.

The free Watershot app acts as a software companion, overlaying GPS coordinates and other pertinent data to relay selected shooting mode and dive-related data like a log and analyzer. $189.99. watershot.com