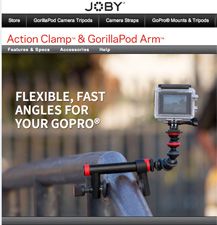 San Francisco, CA—Action video camera users can now shoot third-person video at any angle in any type of setting with the new Action series from JOBY, which is comprised of three products.

“We see mostly first-person viewpoints in action video, but we think that gets boring fast. If you want to show off your stylish kick flip or show yourself flowing down a mountain bike trail, you need an off-body place to mount your camera. You need something that lets you film yourself at any angle in any environment or even multiple cameras shooting from different angles. When you can do that, you get to be the director, the camera crew and the star,” said Michael Jue, director of product design at JOBY.

The GorillaPod Action Tripod builds on the award-winning GorillaPod line, providing longer, flexible legs suitable for any terrain or to wrap around objects like a tree branch or a fence. An integrated ball head with a bubble-level gives users pinpoint control on the camera angle. SRP: $49.95.

The Action Clamp & Locking Arm brings an innovative clamp that lets users quickly secure their GoPro camera to any surface less than two inches in width. Now a stop sign, table ledge, handrails or doors can be used as filming platforms. The locking arm has two fully articulating ball joints that position the camera at any angle needed while providing a vibration-resistant hold. $39.95.

The Action Clamp & GorillaPod Arm has the same action clamp but is equipped with a flexible GorillaPod Arm for on-the-fly adjustments with its five balls and sockets. $29.95.

All of the Action series products come with a removable tripod mount for GoPro that can be used on any tripod with a ¼”-20 screw. Removing the GoPro mount makes the Action products compatible with other action video cameras that use a ¼”-20 tripod mount, such as Sony Action Cams or Contour cameras.

“We design adaptable gear for people who want to shoot wherever they are or at whatever crazy angle they want to capture. With just a few of our products, you can shoot great scenes that look like you have three assistants setting up your shots,” said Noah Balmer, JOBY designer. joby.com