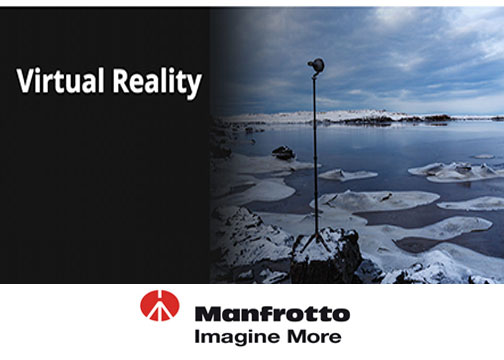 Manfrotto’s 360º VR offerings include bases, accessories and extension booms developed to make it easier to create 360º video as well as photos. Manfrotto is a global developer and manufacturer of premium photo, video and lighting support products and accessories.

With this new VR range, Manfrotto hopes to facilitate the transition that is taking immersive content creation into the mainstream—from niche professional to widespread consumer applications.

“Leveraging Manfrotto’s innovative offering, photographers and videographers can effortlessly capture entire scenes around their camera, enabling anyone viewing the content to look around and feel like they are experiencing the scenery in real life,” the company explained.

Manfrotto’s 360º virtual reality range provides a choice of combinations for individual content makers to select according to their specific needs and objectives. Furthermore, Manfrotto’s VR accessories are compatible with all products in the range.

The company’s VR bases are built to provide stable support. In addition, they are compact enough not to show in 360° shots. Moreover, Manfrotto says “they guarantee the stability photographers and videographers need to get a few meters off the ground.” The bases are available in a variety of sizes as well as materials to suit individual creative requirements.

Manfrotto’s VR boom extensions maximize camera height when required. They can be connected to all the bases in the Manfrotto VR portfolio. This will enable users to achieve a wide variety of heights.

The new 360° VR range also features a selection of kits designed to make 360° content creation easy. The kits are compatible with the most popular 360° cameras. These products also pair seamlessly with Manfrotto’s exclusive 360Rize VR rigs. In addition, they are engineered with high-quality materials and careful attention to ergonomics and detail.

The following products are now available nationwide at the respective suggested retail prices:

The company is among the world leaders in the design, production and distribution of professional products for photography, video and entertainment. Lino Manfrotto founded the company in 1972, based on his experience. Moreover, its mission has always been to support and simplify the work of reporters, photographers and producers.

Part of the UK-based Vitec Group since 1989, Manfrotto now has a worldwide presence. In its nine key markets—Italy, France, Germany, the United Kingdom, China, Japan, Hong Kong, the United States and also the Netherlands—it is represented by its own direct distribution system—Manfrotto Distribution. In addition, in 80 other countries independent distributors handle sales.

Through the Imaging Division of Vitec Group, Manfrotto Distribution owns the following international brands: Manfrotto, Gitzo, Lastolite by Manfrotto as well as Avenger. In addition, it is the U.S. distributor of Gossen, Metz, 360Rize, Shoulderpod and National Geographic. manfrotto.us