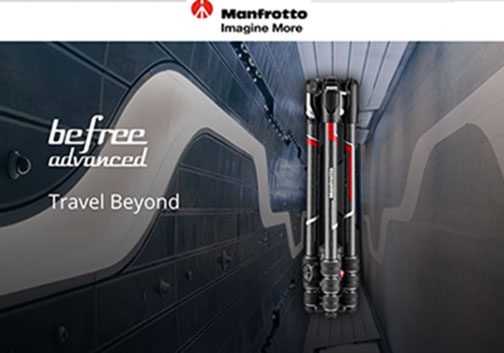 Upper Saddle River, NJ—Manfrotto added to its travel tripod range with the Manfrotto Befree 2n1, the most versatile model in the Befree range. The all-in-one solution consists of a tripod that converts into a monopod in a few steps, while retaining the same stability afforded throughout the Befree collection.

The technology behind the Befree 2n1 is a dedicated locking system built to ensure the total absence of play when working as a tripod or as a monopod. Furthermore, the conjunction cap on the center column of the Befree 2n1 firmly connects the tripod leg to the tripod column, giving shape to a solid travel monopod.

In addition, the Befree 2n1 enables quick switching from a tripod to a monopod. After a half-turn anticlockwise, a red rubber ring appears on the tripod leg, signalling that the tube can be safely removed for use as a monopod. The Befree 2n1 is available in two versions: a quick power lock version with levers; and the M-lock twist option.

In addition, following the success of the Befree Live in both aluminum and carbon versions, Manfrotto is releasing the Befree Live with Quick Power Lock. This version is for independent content creators who prefer the lever lock system.

All three models, 100% made in Italy, will be available late September.

Manfrotto’s Befree 2n1 aluminum travel tripod with a lever lockand ball head kit is for advanced hobbyist photographers who want versatility in one travel solution. “Its ergonomic design makes operating the Manfrotto Befree 2n1 intuitive and fast, enabling even the most demanding photographers to set their equipment up quickly and easily, so they can completely focus on catching the desired shot,” the company announced.

The Befree 2n1 features an integrated full-size aluminum monopod that mounts in a few steps. By unlocking the mechanism on the leg with the leg warmer on, and pulling out the tripod column, the two solid aluminum blocks can join together with the dedicated cap screwed under the column. The monopod holds up to an 11-pound payload.

Moreover, this model provides a new locking mechanism called the QPL Travel lever developed by Manfrotto. It brings the locking power of the professional QPL lever on professional Manfrotto tripods to a more lightweight version for travel. The new on-off mechanism allows secure setup and adjustment to provide stability in all its configurations when the tripod is open. In addition, both right- or left-handed photographers can use the leg-angle selector.

The Befree 2n1 can be set to three independent leg angle positions. And Manfrotto says its spider ensures stability on all terrains, keeping the camera steady. It also features Manfrotto’s Easy Link, adopted from the professional 190 & 055 tripods. This allows photographers to add accessories such as lights or reflectors.

The tripod comes with Manfrotto’s Advanced 494 aluminum center ball head, which features three independent controls: a main knob for managing the sphere lock; an integrated friction control knob adjusts the ball tension, so equipment weight is balanced and shots framed precisely; and an independent panoramic knob that keeps the horizon flat and moves the camera horizontally.

Moreover, the head mounts a unique plate that makes it compatible with standard head attachments like the Manfrotto RC2 and the Arca-Swiss style.

The Manfrotto Befree 2n1 aluminum travel tripod with a twist lock and ball head kit is also offered as a travel solution for advanced hobbyist photographers. It too features an integrated full-size aluminum monopod that mounts in the same manner as the Befree 2n1 tripod lever kit. In addition, it handles an 11-pound payload.

This model introduces Manfrotto’s M-lock twist-locking system. Moreover, the M-lock has no protruding parts and its mechanism closes around the head. This enables the Befree to slip in and out of its storage pocket.

Again, right- and left-handed photographers can use the leg-angle selector. Also, it sets to three independent leg angle positions.

This kit also includes the same spider and Easy Link system as the lever kit. Moreover, it integrates Manfrotto’s Advanced 494 aluminum center ball head with the same unique plate. It also retails for $219.99.

Manfrotto’s Befree Live Lever kit is its most compact travel video tripod solution. The tripod is ideal for on-the-go hobbyist videographers and vloggers. Compact and lightweight, the travel tripod is easy to carry for recording with DSLRs, mirrorless cameras or small camcorders. In addition, it features a tripod spider developed to keep cameras stable on all types of terrain.

In addition, it employs the Befree Live fluid head. The head features a fluid drag system on pan and tilt. It keeps a camera balanced, thanks to its sliding video plate. The fluid head is provided with two on/off knobs that lock and unlock the head’s pan-and-tilt movements separately. It retails for $239.99.