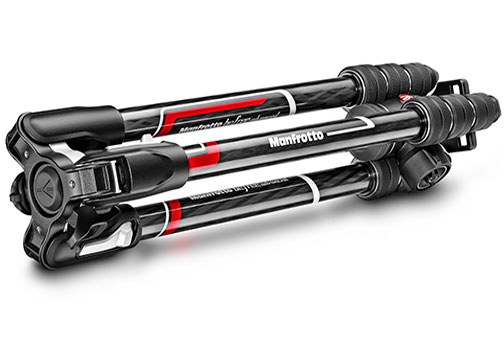 These travel tripods feature carbon fiber legs to ensure support and rigidity. In addition, for portability, the Befree Advanced Carbon Fiber weighs 2.75 pounds. Like the aluminum version, this new model uses Manfrotto’s updated 494 center ball head with friction control. With the ball head, it has a suggested retail price of $319.99.

The brand-new Befree GT travel tripod, available in both aluminum and carbon fiber versions, is targeted at professional photographers. The ergonomic design, inherited from the Befree Advanced, provides portability and stability. The tripod can fold down to 17 inches as well as handle a payload of 22 pounds. In addition, the Befree GT mounts the new Manfrotto 496 center ball head with fiction control. This head is offered to provide higher performance in terms of capacity and precision.

Both the Befree Advanced Carbon Fiber and the Befree GT models feature M-lock. The new twist lock system was developed by Manfrotto to enhance compactness as well as the speed of use. Moreover, both tripods feature leg-angle selectors that can be set to three independent angles and operated with either the left or right hand.

In addition, the solid spider employs the same easy link feature as Manfrotto’s professional 190 and 055 tripods. This allows photographers to add accessories, such as lights, reflectors or monitors. These new models also mount a unique plate, the 200PL-PRO. This makes them compatible with widespread standard head attachments like the Manfrotto RC2 as well as Arca-Swiss style.

Completing the lineup is this lightweight video travel tripod. It can be used with DSLR and compact mirrorless cameras as well as small camcorders. This model features a small size and minimal weight of 3 pounds. 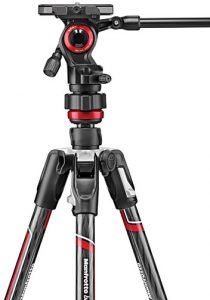 The Befree Live Carbon Fiber has the same new tripod legs as the photographic Befree Advanced Carbon Fiber. However, it has the added feature of a leveling column for horizontal setup on uneven surfaces.

It also uses the Befree Live fluid head with a fluid drag system on pan and tilt and a sliding video plate to keep the camera balanced. For easy setup, the fluid head has two knobs that lock and unlock the head’s pan-and-tilt movements separately. SRP: $349.99.