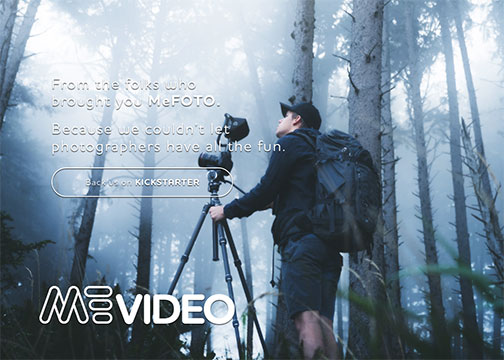 North White Plains, NY—MeFoto announced the launch of MeVideo, a new sister company focusing on the film and video market. Its initial offering, a travel video tripod, is now available on Kickstarter.

Designed to be “durable, lightweight, thoughtful and intuitive,” MeVideo is a full-featured travel video tripod.

“We created MeVideo with one simple goal: to create the best compact, travel-friendly, user-friendly video tripod ever for today’s on-the-go filmmakers and videographers. We wanted to create a tripod that makes sense from the moment you put your hands on it; something detailed, yet approachable—and then, to make it incredibly beautiful,” commented Brian Hynes, MeFoto and MeVideo brand marketing manager.

The new travel tripod features reverse folding legs to allow for a more compact folded form for traveling. An integrated leveling platform is engineered for precise, intuitive positioning of the camera on the center column without needing to adjust the tripod’s legs.

In addition, a removable flat base head has a ratchet-style, metal adjustment knob for leveling. The head also can be used on other flat surfaces, such as sliders, jibs and half ball adapters.

Another feature is a split/center column for flexibility as well as providing the ability to get very low to the ground.

There are also independent locking positions for the legs to enable setup on any terrain. And integrated, stainless steel spikes can be expanded or retracted into the rubber feet for stability on any surface.

The tripod can also convert to a monopod. To accomplish this, users can unscrew the center column and combine it with the padded leg.

The tripod is available in anodized aluminum as well as carbon fiber in black or titanium. It comes with a padded, canvas carrying case for additional protection when traveling.

MeVideo launched its Kickstarter campaign with the goal of raising $50,000. Kickstarter contributors will receive a discounted rate of $349 for the aluminum version and $499 for the carbon fiber model.

When the tripod publicly launches in early 2018, the retail price is expected to be $499 for the aluminum tripod and $699 for the carbon fiber model. mefoto.com and mevideo.co