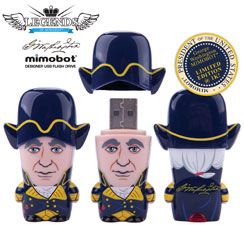 Boston, MA—In honor of Presidents’ Day, Mimoco, makers of the collectible line of Mimobot designer USB flash drives, proclaimed the latest in their Legends of Mimobot series that features icons, geniuses and stars of the human race. Celebrating the American spirit, democracy and freedom, the company released Mimobot flash drives in the form of George Washington and Abraham Lincoln.

The two American forefathers’ stylistically illustrated USB drives were issued in conjunction with the birthdays of these great presidents. The George Washington and Abraham Lincoln Mimobot drives, produced in limited editions, are available in up to 128GB capacities and come preloaded with bonus wallpapers, icons and avatars of the two presidents.

George Washington, America’s first president, is a symbol for the birth and establishment of the United States, the “Father of His Country.” The George Washington Mimobot features a Mona Lisa-esque smile hiding wooden teeth. He’s wearing his Colonial-era tricorn hat on top of his iconic white wig and is holding a cherry cluster. The Mimobot stores and transports photos, videos, documents, music and other data. The George Washington drive, the first president in Mimobot form, is a hand-numbered limited edition of 1,000 pieces.

Abraham Lincoln, immortalized as the “Great Emancipator” and America’s 16th president, was considered one of the greatest speeches in American history. His Mimobot form leaves the top hat to the imagination, showcasing his famous curtain-style beard, and he sports a bow tie and a classic mid-19th century outfit. This Mimobot drive also enables photos, documents, video and music files to be shared, transported and collected no matter the capacity.