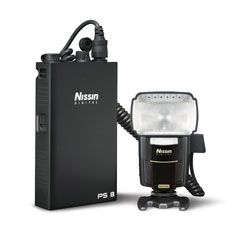 Meriden, NH—The next-generation Nissin Power Pack PS 8, engineered to provide more power and faster charging time at an affordable price, was introduced at the WPPI Expo in Las Vegas. As an added advantage, the new features come in a more compact, lightweight housing made of high-strength plastic instead of metal.

The core boosting circuit of the Nissin Power Pack PS 8 was redesigned to reduce heat output, compared with the previous model. With a quick-loading battery cartridge, it also has increased battery capacity—and a decreased overall weight of 25 ounces. It is the first time Nissin has included it on the external power pack, and the company notes, “Overall efficiency significantly increases the number of flashes per charge.”

Another new feature of the Nissin Power Pack PS 8 is an LED indication lamp, located at the top of the body, which turns green after being fully charged. When the battery level is less than or equal to 30%, it turns from green to red, and the LED begins blinking red, indicating the battery is nearly discharged.

“With the increasing popularity of smartphones and tablet devices, photographers often have to carry backup power stations for these devices, and the Nissin Power Pack PS 8 provides a USB charging socket that supports DC 5V 2A output,” stated Nissin. “It can be a fast-charging device for image data transfer.” Belt buckles and a shoulder strap are included for convenient use at any time.

Distributed exclusively by Minox in the USA, the Nissin Power Pack PS 8 will be available in April for Canon, Nikon and Sony digital SLR cameras. minox.com/usa