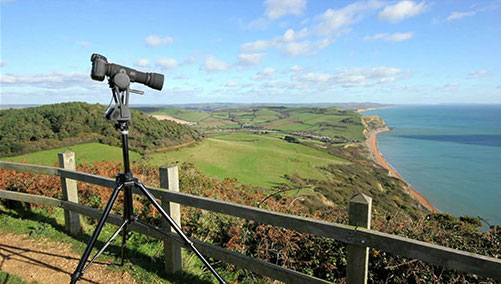 Hampstead, MD—Epic robotic mounts from GigaPan empower cameras to take hundreds, even thousands, of photos that are combined to create one highly detailed image with amazing depth and clarity.

The Epic Pro is designed to work with DSLR cameras and larger lenses. Strong enough to hold a camera and lens combination of up to 10 pounds, the Epic Pro enables users to capture enormous panoramas with crisp detail.

Building on the standard established by the Epic Pro, OmegaBrandess introduced the Epic Pro V. This new model adds sought-after features that bring video panning capability to the GigaPan community.

The Epic Pro V provides horizontal rotation up to 360º and vertical panning up to 180º continuously, while the camera is in the video recording mode. In addition, it provides the ability to pan on two axes, enabling diagonal movement in a fluid motion with speed control.

The GigaPan walks users through the setup. They set the start and finish positions and the duration of the movement. They can then preview the result before starting to film. Starting and stopping video recording is done manually from the camera.

In conjunction with the video panning mode, a motion time-lapse mode is also available. Photographers select the beginning and ending positions, the duration of the time lapse and the number of images to shoot. This also lets them move on two axes, enabling a horizontal rotation up to 360º, vertical rotation up to 180º or diagonal movement. This functionality requires a still camera connected via a GigaPan remote shutter release cord.

Furthermore, all other features of the Gigapan Epic Pro are retained in the Epic Pro V. OmegaBrandess offers the Epic Pro V for a suggested list price of $995. omegabrandess.com