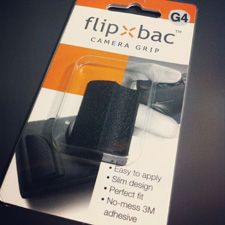 Hampstead, MD—OmegaBrandess and Flipbac announced new Flipbac camera grips, designed to improve the handling of a camera that has no grip and a smooth finish. Flipbac grips can be easily applied to the front of a camera to prevent slipping and create a solid hold.

To make one-handed picture taking easier and safer, Flipbac offers four different grips that blend in seamlessly with a variety of camera models. Made of 100% silicone, the Flipbac camera grips flex to the shape of a camera’s body.

Grip 1 has a concave bevel the full vertical length of the grip, to fit the body of cameras such as the Canon G12 and provide ample room for fingers to grab.

Grip 2 has a concave bevel that follows a rounded upper contour, much like the grip found on the Panasonic Lumix DMC-GF2. This grip allows the index finger to rest closer to the shutter release button.

The second edition of Flipbac’s grips includes the Flipbac G3, which is the same height (38mm) as grip G1 and G2 but is much narrower at 19mm. This narrow profile leaves more room between the lens and the grip. The Flipbac G3 camera grip is suited for Sony’s DSC-RX100 and will also accommodate very small cameras.

The Flipbac G4 will fit over the small grip-strip found on cameras such as the Canon S100 and Nikon 1 V1, as well as other cameras lacking a grip. It features a leather grain texture, and it is made of high-grade silicone and 3M adhesive. When mounted on a camera, the G4 is designed to look like a “factory finish.” omegabrandess.com