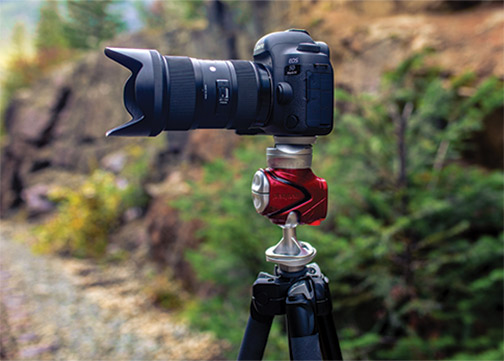 “Everything photographers and videographers know about tripods and ball heads is about to change,” said Larry Tiefenbrunn, CEO and inventor. “This Kickstarter campaign, to raise production funds, will help us bring to market another unique product, expanding our solutions for creative image makers.”

Available for sale later this year, the easy-to-use Platyball ball head will come in two models: the Platyball Elite as well as the Platyball Ergo. Moreover, compatible with most tripods, both units have identical mechanical features. However, the Elite version features a patented, accurate LED-based leveling indicator that makes it stand out from other ball heads on the market.

The durable ball head is crafted from forged aluminum with a metallic clear-coat finish. Furthermore, it has no protruding knobs. The two sleek ball heads also feature convenient single-handed ergonomics. 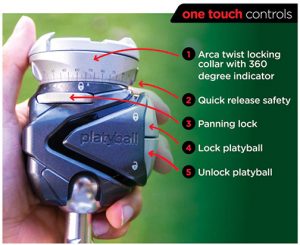 In addition, their quick-release clamp is Arca-Swiss compatible and has a twist-locking collar and safety button for added security. The ball head also features a standard 3/8-inch tripod socket. Reinforced with stainless steel, it is also adaptable to 1/4 inch with the included reducer bushing.

Moreover, the Platyball Elite model includes a bidirectional electronic level. There are also two buttons on the face; one activates the leveling system and the other is multifunctional for brightness, calibration and factory reset. A master power switch turns on the power, and a single A23 alkaline battery powers the module.

The Platypod Platyball Kickstarter campaign is located here.
In addition, a video on the Platyball is available on YouTube.

The compact Platypod tripods have an ergonomic flat shape and are balanced for DSLRs and lenses. Further, their design was inspired by the duck-billed platypus, an animal with flat and broad feet.

The company offers two versions of Platypod tripods. The Max line is for DSLRs and video cameras with heavy lenses. The Ultra lineup is for lighter DSLRs, mirrorless and compact action cameras, as well as smartphones.