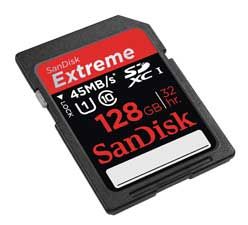 “Consumer video capture is driving user-generated content creation,” said Chris Chute, research manager, worldwide digital imaging solutions, IDC. “This is the first year that more than half of all video captured will be in HD, and that number is set to reach nearly 80 percent in 2014. This trend highlights the need for memory cards that are fast enough to handle a massive data flow while offering enough capacity to store the resulting files.”

The 128GB SanDisk Extreme SDXC UHS-I card is based on the new Ultra High Speed (UHS-I) architecture and is designed to capture hours of top-quality video footage. The card’s UHS Speed Class 1 rating surpasses the recording requirements of demanding video use cases—from home movies captured on a DSLR to high-quality 3D footage.

The Extreme SDXC UHS-I card is designed to help imaging enthusiasts shoot like the pros, with the speed and capacity needed to capture high-quality videos and also high-resolution RAW+JPEG photos, which can reach up to 30MB in size. The card features 45MB/sec read/write speeds, enabling photographers to capture sequences of high-res photos using their camera’s burst mode and then quickly transfer the files to a computer. The card’s fast file-transfer speed lets photographers offload an hour-long Full HD video in five minutes or a batch of 500 high-res photos in as little as one minute, according to specs.