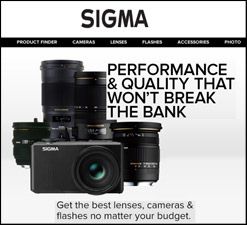 Ronkonkoma, NY—To capitalize on the growing power of online video as a dominant and influential medium on the web, Sigma Photo enlisted Invodo, a business video expert, to expand its portfolio of online video.

While all camera lenses look relatively similar, their functionality and target market segment varies significantly. Educating consumers and helping them understand the differences was a major challenge for Sigma. A pilot project with Invodo demonstrated that product video was an effective way to communicate those differences.

In addition, according to ComScore, retail site visitors who view video stay two minutes longer on average and are 64% more likely to purchase than other site visitors. Sigma proved to be no exception, as customers who viewed product videos were nearly twice as likely to click “Find a Dealer” as consumers who did not view video. Based on the results, the camera and lens manufacturer approached Invodo to produce more product videos to meet key business objectives.

“Invodo has helped us to create dynamic product videos for our extensive line of lenses, cameras and photo equipment,” said Jack Howard, new media specialist, Sigma Corporation. “Consumers can now quickly and easily learn and compare the key features and differences among our products to determine which lens or camera best fits their needs.”

The metrics from the video pilot validate the expanded program, according to Invodo: “In addition to doubling the number of ‘Find a Dealer’ clicks, Invodo analytics demonstrate that three out of five video viewers watch product videos to 80% completion. The video content is also well received by viewers, with an average rating of 4.4 out of 5 and a site-wide average video view rate of 15.1%.”