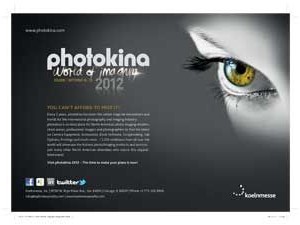 The halls of the giant biennial photokina show in Cologne, Germany, the largest photo-imaging show in the world, are said to comprise an area larger than 14 football fields. This intrepid and footsore reporter scoured them all in search of intriguing items that help give events like this their distinctive character.
While I can’t claim to have unearthed each and every fascinating accessory or device on display in the course of my peregrinations, here’s an even dozen things of all kinds that caught my eye.

RealEyes 3D Displays. Imagine a giant lenticular flat screen that shows images captured in 3D in all their three-dimensional glory and you’ve pretty much got the whole plot. The image showcased at the RealEyes’ (a homophone of “realize”—get it?) booth was a luscious Leica M projected considerably larger than life-size on a roughly 2×3-foot screen, but there’s no limit on screen size according to company techs. You do need a 3D module with CGI output to create 3D projectable images, but that’s not a problem these days with so many cameras delivering 3D files. The system uses “Ilford film materials” to display the images. The major hitch for all but commercial enterprises: Price. RealEyes screens cost about $5,500 per square meter. Ouch! real-eyes.eu/?lang=en

Lensbaby Spark. Designed to “spark “creativity, the Spark lets photographers create images with a sweet spot of sharp focus surrounded by “beautiful artistic blur.” This is achieved by simply pressing on its outer ring to tilt the Spark’s 50mm f/5.6 multicoated doublet fixed-focus lens in any direction and holding it in place while you take the shot. The amount of possible tilt is deliberately limited to keep the sweet spot somewhere on the image plane. “The Spark is designed to help young creative photographers express themselves,” said Craig Strong, Lensbaby’s chief creative officer and cofounder. The new gizmo retails for $80, which should appeal to young shooters on a budget. lensbaby.com

Domke PhoTogs Olympic Vest. By now practically everyone not living under a rock knows that team USA’s uniforms for the 2012 London Olympics were supplied by Ralph Lauren. But did you know that at the same time Tiffen quietly outfitted the 4,000 official press photographers who were covering the Games with special Olympic logo versions of the Domke PhoTogs photo vest? One of the vests, issued at the request of the London Olympics Organizing Committee, was proudly displayed at the Tiffen booth at photokina. While the Olympic logo vests can’t be sold according to Olympic rules, the virtually identical civilian version—made of 100% machine-washable cotton with mesh panels at yoke and back for cooling ventilation, 18 pockets (including cargo pockets, huge back pockets, pockets with water-tight zippers) and even a removable press pass/ID holder—is now available at a street price of $109. tiffen.com

Lens of Another Color. The robustly constructed, exquisitely finished Elicar V-HQ 300-600mm IF ED f/4.1-5.7 macro lens is technically fascinating on several counts: it gets down to 1:4 magnification in macro mode, employs four ED elements in its optical design for high performance, and has a 10-bladed diaphragm for beautiful bokeh. But the first thing you notice when handling this 16.3-inch long, 8.3-pound behemoth is its distinctive moss green color, described by its creator as “nature friendly.” Also unusual is its lack of rubberized zoom, focus and aperture rings—the striated grip pattern is cast into the metal itself! The Elicar 300-600mm is available in fixed Nikon, Canon, Pentax K and C/CS mounts and can be fitted to CCTV and C-mount video cameras. The U.S. distributor is expected to be Argraph Corporation and the projected retail price will be around $12k. argraph.com

Impossible Instant Lab. Remember Impossible, the guys that kept old Polaroid cameras relevant by manufacturing new Polaroid film for Polaroid 600, SX-70, Image/Spectra and 8×10 view cameras in Holland? Well they’ve got something new, the Instant Lab, a device that turns iPhone images into analog instant photos. The German-made gadget resembles a Polaroid camera of yore, but its “bellows” consists of nesting telescoping elements reminiscent of the collapsible drinking cups used by campers. You place it back down on its Polaroid pack-holder, mount your iPhone with displayed image face down on its cradle, and take a picture of the screen. It’s based on an Impossible FPU (Film Processing Unit) developed with DHW, the former Rollei factory in Braunschweig, Germany. The FPU will provide the basis of a range of Impossible analog instant camera and hardware concepts slated for 2013. Would you believe an Impossible pinhole or viewfinder camera? The Impossible Instant Lab should be available 1Q 2013 for $299, but no U.S. distributor has been named. the-impossible-project.com

Ball Pod. You could call this amorphous object the natural evolution of the beanbag, a toy often used by pro shooters to stabilize the barrels of long telephotos, but this one has a ¼-x-20 tripod screw and comes in a variety of colors. It will contour to virtually any surface by pressing it firmly in place anywhere you want a camera to stay put. The Brit at the Ball Pod booth revealed a fascinating secret: it’s filled with risotto, so if you’re stranded on a desert island, just cut it open, boil some water and you won’t starve! The Ball Pod sells in Europe for about $32. ballpod.eu

Sirui VH-20 Pro Fluid Ball Head. This gorgeously made, smooth-operating video ball head provides fully adjustable, true fluid damping adjustments as well as locking friction adjustments on the tilt, an adjustable lever arm and full 360º horizontal and +/- 90º vertical movement for maximum shooting flexibility. What sets it apart aside from its flawless execution? Would you believe a lighted bubble level on the quick-release platform powered by a flat replaceable battery—just the thing for taking a shot in the dark. It weighs 4.65 pounds and its load capacity is a hefty 33.1 pounds. $635. argraph.com

Gariz Kool Korean Kamera Kases. How about a line of upscale cases for mirrorless and high-end compact cameras? Gariz is a Korean case maker that has the genuine leather goods, like an elegant half-case in leather for the Sony NEX-7 that provides direct access to batteries and media at $95 retail, or a full-coverage ever-ready leather case for the posh Sony DSC-RX100 at a street price of $76. Gariz is currently looking for a U.S. distributor. Check them out at gariz.com or contact Fiona Kim at gariz1467@naver.com

Artisan & Artist Luxury Cases. Artisan & Artist handcrafts cases in Japan for the carriage trade, and as the saying goes, if you have to ask the price you probably can’t afford one. Among all the exquisite camera bags, silken straps and splendid leather cases at their booth, one caught our eye—a genuine crocodile half-case for the Leica M9 in a captivating shade of blue. It can be had for only $1,600, and unlike Artisan’s other cases, there is no alternative hue currently available, even on special order. If your customers require something suitable to slip into the glove box of their Rolls or Bentley, check out the current offerings at www.artisan-n-artist.com.

Rosco Litepad Loop Standard Kit. This cool, new unit is essentially a continuous light version of the classic ring light flash. Rosco created it by punching a hole in its existing 9.17-inch Litepad to provide a soft, enveloping light source. The 2.4-pound unit runs on a AA battery pack or the included AC adapter, and it comes with a camera mounting assembly and four plug adapters. It puts out daylight-balanced 5,800K illumination. $699. rosco.com

KIS Battery-Powered Photo Booth. Claimed to be the first of its kind, this self-powered ID photo booth “can be set up in the middle of nowhere and run for over a week,” according to the tech rep. It’s powered by a 10.5-day (based on 12 clients per day) rechargeable, replaceable battery, is ICAO compliant and can output a range of ID products. Other specs include: a 15-inch screen; vocal instructions in six languages; and two 12-volt batteries providing 24-volt, 5 Amp power. The booth’s Mitsubishi CP9550 printer can turn out 600 300-dpi, 4×6 prints at a rate of one every 15 sec, and it’s set up for coin operation with an optional bill acceptor. Going forward this self-sufficient moneymaker will be configured to turn out a variety of products, including fun lenticular flip prints and morphed prints. Price is based on feature mix. photo-me.com

Novoflex Patron Umbrella System. This high-quality, ultra-lightweight, hands-free umbrella can protect shooters and their equipment, but it does a heck of a lot more. Its UV coating is claimed to reduce the temperature under the umbrella by about 15%, and its fiberglass shaft and strut allow it to be flipped inside out to provide an efficient reflector. It can also be used as a walking stick, and its ¼-x-20 camera mount allows it to be used as a handy monopod. Additional reflecting surfaces can be added to the inside or outside for various lighting effects. Finally, it can be configured as a shooting or changing tent if the umbrella is screwed onto a tripod or monopod and optional material is added. The umbrella alone retails for about $100. hpmarketing.com