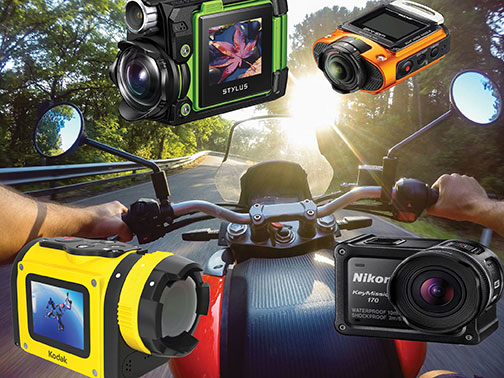 The action cam market has been growing with more players, smaller but more sophisticated action cameras and, not surprisingly, 4K video support.

The initial target audience was—and, in large part, continues to be—outdoor adventurers and athletes who want to capture their first-person experiences on video. But even consumers who don’t participate in extreme sports have embraced these action cams for capturing their decidedly less heart-stopping activities.

These little cameras are generally easy to use. And, of course, they can be worn, mounted on bicycles, at the end of surfboards or pretty much anything—on land and underwater—thanks to multiple accessory options. Each manufacturer offers a range of mounts for their cameras while some third-party accessories are available as well.

More recently, 360º-capable cameras have added another segment to this category. For now, however, we’ll stick with the more traditional models that come equipped with wide- and ultrawide-angle lenses to capture the action.

One of the most advanced action cams on the market today, the Garmin Virb Ultra 30 is ideal for adventurers and athletes who want to record data besides the visual action that goes along with a variety of sports, from snowboarding to skydiving and beyond. In addition to built-in GPS, the Ultra 30’s G-Metrix records performance data. This can include speed, direction, heartbeat, distance and a whole lot more. 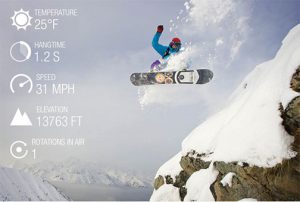 On the photo side, the camera’s 1.75-inch, color touch-screen LCD even works inside the supplied waterproof case. The case is depth-rated to 131 feet. The camera records 4K video at 30 frames per sec, has 3-axis image stabilization (for up to 1080p/60 fps) and voice-control recording. With compatible Apple devices, shooters can live stream the action in HD on YouTube. Editing software and a remote app are available.

The 3.1-ounce (with battery) Ultra 30 is also equipped with ANT+, Wi-Fi and Bluetooth connectivity. The Ultra 30 may be overkill for some users, but for the right customer, this action cam delivers everything an outdoor adventurer needs. $400. virb.garmin.com

GoPro has a solid place in the action cam arena, and the new Hero5 Black is a well-balanced combination of features and ease of use. The camera, which records 4K video as well as RAW and WDR (wide dynamic range) images, now features a 2-inch, color touch display and advanced image stabilization (up to 1080p/30 fps). Voice control commands can start/stop recording as well as change modes and other options; otherwise, all functions are accessed via the touch LCD.

The camera is capable of shooting 12 megapixel still images with up to a 30-fps burst; time lapse is also available. GPS is built in and, with the latest version of GoPro’s Quik desktop software and its telemetry feature, users can access speed, altitude, elevation gain and other data parameters to overlay when editing footage. The Bluetooth and Wi-Fi equipped cam allows users to connect to smart devices and, with a GoPro Plus subscription, automatically upload content to the cloud. Of course, the camera is waterproof—down to 33 feet without a housing. $400.

For $100 less, GoPro’s Hero5 Session provides many of the same core features, minus the touch display and RAW/WDR photo capture, but in a smaller body. gopro.com

Although it’s been around a while, the Kodak PixPro SP1 is an affordable option for those who want a rugged action cam and don’t need 4K video. Waterproof to 32 feet—without a special housing—the SP1 is also shockproof from drops of 6.5 feet as well as dustproof and freezeproof to 14ºF. Built around a 14MP CMOS sensor, this action cam is capable of capturing Full HD 1080p video at 30 fps and slow motion movies.

The bright yellow cam measures 3.3×2.x1.6 inches and weighs about 5.4 ounces (body only). Bundled accessories include a rechargeable battery good for about 350 shots or 130 minutes of HD video capture. $199.

Nikon entered the action cam arena in 2016 with a trio of models, including the 4K-capable KeyMission 170. It features a wide, 15mm (equivalent) f/2.8 lens with a 170º first-person angle of view. And the camera can focus as close as 1 foot 4 inches. It’s equipped with a 1.5-inch, color LCD monitor as well as built-in Wi-Fi and Bluetooth connectivity. The latter is compatible with Nikon’s SnapBridge app for wireless sharing. In addition to UHD video, the KeyMission 170 also captures slow motion video, still images and time-lapse sequences. And it provides loop recording.

Electronic vibration reduction is available but only for up to Full HD video. The camera is waterproof to 33 feet without a housing, shockproof to 6.6 feet, dustproof and freezeproof to 14ºF. Battery life runs about 60 minutes of video or up to 250 shots. Nicely compact at 2.7×1.9×1.7 inches, the KeyMission 170 weighs 4.8 ounces with battery, memory card and lens protector. The KeyMission 170 comes with a remote control and more than 10 mounting accessories. $400.

Olympus is no stranger to tough cameras. And the TG-Tracker takes advantage of the company’s past experience with this waterproof, to 100 feet without a housing; shockproof to 7 feet; crushproof to 220 lbf.; freezeproof to 14ºF; and dustproof action cam. The cam features 4K UHD video and an f/2.0 ultrawide-angle lens with a 204º angle of view. The TG-Tracker is also equipped with 5-axis electronic image stabilization and a 90º tiltable LCD. For a little extra illumination in low light, it has an LED headlight.

As expected, the TG-Tracker offers Wi-Fi and GPS. Furthermore,  it features sensors for compass direction and to log altitude, water depth and temperature as well as an accelerometer to measure g-force and mark high-activity movements. With the free Olympus Image Track app, users can transfer and view videos and field data on smart devices. $350. olympusamerica.com

About 40% smaller and lighter than previous WG models, this little action cam is waterproof to 66 feet without a housing. It is also shockproof and freezeproof (14ºF). With its 14mm (equivalent) f/2.0 lens, the WG-M2 offers an ultrawide 204º angle of view for movies or narrow mode to minimize shake. In addition to 8MP still images—with a burst mode of 8 fps—users can capture video. Video can be recorded in 4K UHD, Full HD, HD, slow motion or time lapse. In addition, there’s a special underwater movie mode.

On the creative side, movies can be captured with more than a half dozen effects, including monochrome and bleach bypass. ISO and shutter speed options are broader than most of the competition, with a high ISO of 6,400 and superfast shutter speeds up to 1/24,000 sec. A couple of cool functions include the automatic rotation of video and automatic camera vibration when recording is started/stopped.

Wi-Fi enabled, the WG-M2 works with a free app for remote operation and sharing on smart devices. It weighs 4.8 ounces fully loaded and measures 2.3×1.3×3.1 inches. $300
ricohimaging.com

In addition to Wi-Fi and GPS, the FDR-X3000 has a built-in stereo microphone with wind noise reduction. However, more advanced users may want to use the stereo mini jack to attach an external mic. Time-lapse and high-speed/slow motion 120-fps capture are available along with several apps and a built-in highlight movie maker function. Although the camera is splashproof on its own, it can operate to depths of 197 feet with the underwater housing that comes with both kits.