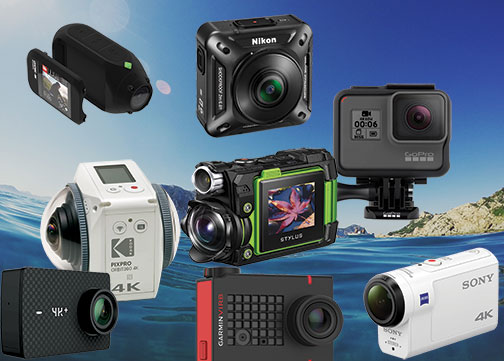 The very embodiment of today’s active lifestyle, action cameras are great for shooting on the trail, in the air, on and under the water, on ski slopes or wherever people want to record their most fulfilling adventures. In short, they are go-to imaging devices for on-the-move shooters.

That’s why action cameras are broad-spectrum imaging devices sporting such advanced features as 4K video recording at 30 and 60 frames per sec, sophisticated built-in Wi-Fi and GPS capabilities, advanced image stabilization systems, and the ability to capture high-res still bursts on the fly.

They’re often mounted on bicycles, motorcycles, cars, planes and skis, in underwater housings and, of course, on drones. Moreover, many can operate remotely over fairly long distances via radio or voice control.

Today’s action cameras are rugged, reliable, ingenious, ergonomic capture devices in an exciting up-market category that’s clearly on the upswing for 2018 and beyond. The customers that buy them are generally savvy shooters who are into the latest technology. This is a group well worth cultivating since they’re more likely to purchase high-capacity storage solutions, upgrade their cameras and add accessories.

To give you an overview of the action camera category, we’ve detailed eight models. However, we sure hope that reading their exciting specs inspires you to check out the entire category.

GoPro has faced serious challenges lately, but that didn’t prevent them from releasing the Hero6 Black. A serious upgrade, it offers twice the performance of the previous model. For starters, it captures smooth 4K video at 60 fps, 2.7K video at 120 fps and Full HD 1080p video at a blistering 240 fps for dramatic slow-motion effects. Moreover, it shoots 12 megapixel stills at an impressive framing rate of 30 fps.

It also employs a wide-angle all-glass lens, improved video image stabilization plus Wi-Fi, Bluetooth and GPS connectivity with auto upload to the cloud. In addition, it offers remote monitoring, voice control for hands-free operation and a 2-inch rear display with touch-zoom functions.

Waterproof to 33 feet, the Hero6 has advanced wind-noise reduction using three mics and a linear video mode that corrects for distortion. In addition, the action cam is optimized for QuikStories with 3x faster 5GHz Wi-Fi. As a result, captured footage transfers more rapidly to a phone, where the GoPro app automatically creates QuikStory videos. Other features include night photo, burst and time-lapse modes. The Hero6 comes with curved and flat adhesive mounts for various quick-mounting options. $399.99.

This advanced Sony action cam is a great choice for underwater shooters because it comes with a robust housing that’s waterproof to 197 feet—deep enough for most scuba applications. The X3000 records video in 4K UHD (3,840×2,160) resolution at 30 fps or a cinematic 24 fps. It can also record Full HD 1080p video in the XAVC S format as well as in MP4 mode. Additional recording options include Full HD 1080p at 120 fps and 720p video at 240 fps for vibrant slow-motion effects. Plus, it captures 12MP still images.

Other features include: Wi-Fi for remote monitoring and control; GPS; built-in stereo audio recording; an autoexposure-compensation control; manual white balance settings; and time-lapse mode. Moreover, to facilitate quick editing, a Highlight Movie Maker algorithm uses data from the gyro, scene color, smile detection and other settings to pick out the best moments and create a self-contained MP4 movie for easy sharing and upload. $369.99.

The first action camera in the very successful Olympus Tough series of adventure cameras, the stylish TG-Tracker upholds the tradition with a robust body that’s waterproof to nearly 100 feet, shockproof enough to handle a 7-foot drop, crushproof to 220 lbf and freezeproof down to 14ºF. Its 1/2.3-inch backside-illuminated CMOS sensor can capture 4K UHD video at 30 fps, Full HD 1080p video at up to 60 fps and 720p video at up to 240 fps for spectacular slow-motion effects. Plus, it can shoot 8MP still photos.

Its fast, ultrawide-angle 13.9mm-equivalent f/2 lens covers an impressive 204º angle and focuses down to 7.9 inches. The lens is complemented by integrated 5-axis electronic image stabilization. Moreover, the TG-Tracker’s lifestyle features include a log mode that lets users record data from its built-in GPS location sensors, compass, accelerometer and barometer.

Other features include: a tilt-out 1.5-inch LCD; a built-in LED headlamp for low-light shooting; and Wi-Fi connectivity for remote operation, image/video sharing as well as content transfer. $269.99.

Garmin, the guru of GPS devices, created this attractive, action camera that captures 4K UHD video at 30 fps, Full HD 1080p video at up to 120 fps and 720p video at 240 fps for awesome slow-motion clips. It can also capture 12MP still images at burst rates up to 60 fps. Plus, users can execute voice commands via a high-sensitivity microphone.

The Ultra 30 provides built-in 3-axis video stabilization. Furthermore, its 1.75-inch, color touch screen can be operated even when the camera is in its included 130-foot-maximum-depth, underwater housing. Plus, the cam is ideal for those who want to record data besides the visual action; in addition to built-in GPS, its G-Metrix records performance data such as speed, direction, heartbeat and distance.

Nikon’s futuristically cubical KeyMission 360 is a dual-lens action camera that simultaneously captures two 180º, 4K UHD images. It then automatically stitches them into a single, interactive 360º video. The video can be viewed with (optional) VR goggles as well as on 360º platforms such as YouTube 360. The camera is capable of recording 4K video at 24 fps, Full HD video at 24 fps, 1,440×960 video at 25/30 fps, as well as 24MP still images. Each of its two ultrawide-angle all-glass Nikkor lenses features 7-element, 7-group construction and captures sharp images down to 12 inches.

Moreover, the action camera is waterproof to a depth of 100 feet, will withstand a drop from 6.6 feet and is freezeproof as well as dustproof. The fact that it doesn’t require an extra housing makes for cleaner audio, while built-in electronic Vibration Reduction (VR) technology reduces the effect of camera shake when shooting video.

Other features include: Wi-Fi and Bluetooth; Micro-HDMI output; a Micro-USB 2.0 interface; an optional silicone jacket and underwater lens protector for clearer focus when submerged; and more than 10 mounting options. $499.95.

This upgraded camera from Yi Technology crams a lot of tech into a compact package. This includies an Ambarella H2 SOC processor that records 4K video at 60p; 4K UHD at 30p; 2.7K at up to 60 fps; as well as Full HD 1080p and 720p video at slow-motion 120 and 240 fps, respectively. Its Sony Exmor R CMOS sensor also captures 12MP stills at burst rates up to 30 fps.

Drift’s bullet-shaped beauty is a leading contender in the action cam category because it records DCI 4K (4,096×2,160) video at 25 fps and 4K UHD at 30 fps. For slow-motion effects, it captures Full HD 1080p video at up to 120 fps and 720p at a blistering 240 fps. Moreover, 12MP stills can be captured individually or in multiple bursts, as well as in time-lapse sequences. The Ghost 4K also has dual microphones, one at the front and one at the rear to reduce wind noise, as well as a USB port for adding a third mic. In addition, a built-in video stabilizer works during 1080p recording.

The unit is bundled with curved and flat adhesive mounts for securing it to various surfaces, a quick-release mounting clip and a Bluetooth remote control that can be worn on a wrist. $394.95.

Adopting a minimalist approach to a 360º, VR (virtual reality) camera, the Orbit360 4K integrates two fixed-focus lenses into a futuristic-looking body. The curved lenses work in tandem to capture 360º 4K video that can be uploaded to social media via a dedicated app. The camera is splashproof, shockproof (6.6 feet), dustproof and freezeproof to 14ºF. Its dual 20MP, 1/2.3-inch BSI CMOS sensors work with the lenses to produce three multi-view angles: a 360º spherical view; a 4K full-frame view (front mode); and hemisphere view (round mode).