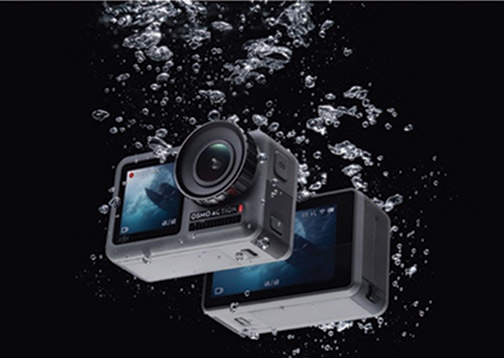 Los Angeles, CA—DJI, a leader in civilian drones, took a new direction with the launch of the DJI Osmo Action camera. Employing DJI’s video stabilization technology, the Osmo Action is a rugged camera for professionals and adventure seekers alike.

“DJI has always pushed the limits of technology. And the content creators who love our products made clear they wanted us to push the limits of their creative potential too. Osmo Action is our cutting-edge answer to what the creative community demands: Exceptional image quality and stabilization in a unique and durable new form factor, with dual color screens and seamless software integration. For all types of creators who push their gear to the limits, Osmo Action sets the new standard,” said Roger Luo, DJI’s president.

“Whether you are capturing aerial content with Mavic 2, incredibly smooth content with Osmo Pocket, or heart-racing footage with Osmo Action, DJI offers a full suite of products for your creative needs.”

The Osmo Action features a compact yet durable design. Constructed to handle extreme conditions, the action camera is dustproof, shockproof enough to withstand a fall from five feet, waterproof down to 36 feet and can operate in subfreezing temperatures (14ºF).

Moreover, the camera sports color screens on both its front and back, allowing for convenient scene composition while on the move. The 2.25-inch rear touch screen employs a water- and fingerprint-repelling coating. The 1.4-inch front screen is for vlogging as well as selfies. In addition, with a brightness of 750 nits, Osmo Action operates in harsh lighting conditions, including direct sunlight.

Furthermore, its interactive user interface, Action OS, combines a streamlined, functional design with flexible operation. Users can power on, initiate recording and rotate through the video and photo capture modes with three dedicated buttons. Moreover, with its SnapShot function, the Osmo Action turns on and begins recording in under two seconds, by pressing the shutter button once.

At its core is a 1/2.3-inch sensor that captures 12 megapixel photos and records 4K video at up to 60 frames per sec at 100Mbps. Also, a three-glass aspherical lens records low-distortion content and aids in reducing warping effects.

In addition, the lens cap is finished with two layers of anti-fingerprint coating to keep the shot clean during use. And an antireflective coating also reduces the unwanted effects of lens glare.

“High-performance stabilization algorithms work in conjunction with EIS to record every movement in smooth, stable, high-quality video, even when recording 4K/60fps,” the company announced. 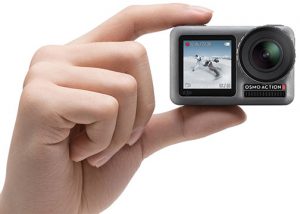 Additionally, Osmo Action is capable of high dynamic range (HDR) video in 4K/30 fps. It provides an additional three stops of dynamic range to the scene; natural transitions between light and dark areas; and details that are often lost in complex lighting.

Plus, the action camera has a removable battery with a run time of 93 minutes while recording at 4K/30 fps with RockSteady enabled. It has a 135-minute recording time at 1080p/30 fps without RockSteady.

Osmo Action also offers a variety of built-in creative features that users can access with a few taps. While recording, they can choose between:

The DJI Osmo Action is available now and retails for $349.

In addition, with the recently released DJI Mimo app, users can connect the Osmo Action to a mobile device via Wi-Fi or Bluetooth for added functionality. As a result, they can take advantage of a live feed from the camera; multiple story templates; and in-app editing.

Moreover, the company is offering an ecosystem of accessories to augment the potential of Osmo Action. They include the following.

• Camera Frame Kit: Included with the camera, this kit comprises a universal mount for additional accessories as well as a window for the LED indicator to show camera status in real time, while protecting the device.

• Adhesive Mounts: With these mounts, users can attach the camera to flat or curved surfaces, including skateboards, bikes, helmets. Both the curved and flat adhesive mounts are included with Osmo Action.

• 3.5mm Adapter: The adapter offers the ability to connect an external mic for professional sound recording.

Pricing and availability for optional accessories will be announced at a later date. 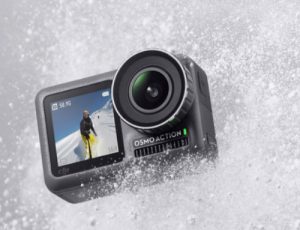 The company further announced that DJI Care Refresh is available for the Osmo Action. For an additional $29, DJI Care Refresh provides comprehensive coverage as well as up to two replacement units within one year.

In addition, in the United States, the DJI trade-up program allows customers to trade in their current action cameras or other technology and receive credit toward the purchase of the Osmo Action.