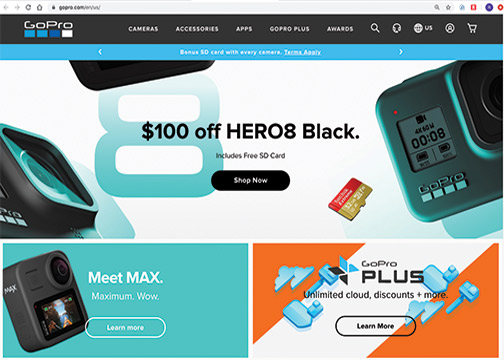 San Mateo, CA—GoPro, Inc. announced that over the four-day Memorial Day weekend, camera unit sales on GoPro.com were the highest ever for a four-day period outside of a fourth quarter or a new camera-launch period.

“We’re continuing to see strength globally in our direct-to-consumer e-commerce business as demand for GoPro continues to grow from the Covid-19 trough we saw in late-March and early-April,” said Brian McGee, CFO and COO of GoPro. “This continued momentum supports our strategic shift to a more direct-to-consumer business; to drive higher gross margins as well as lower the threshold to achieve profitability, even in a Covid-19-impacted business environment.

“Global demand on GoPro.com increased markedly since the third week of April; it consistently outpaced the prior year’s weekly demand by at least 500%. This, along with other factors, contributes to our unit sell-through expectations of 600,000 to 650,000 units in the second quarter of 2020,” added McGee.

Furthermore, on May 20, 2020, GoPro announced the Zeus Mini. Touted the world’s most versatile light, it is a magnetic, mountable and wearable waterproof LED light. The Zeus Mini features a magnetic, swiveling clip mount and is also compatible with GoPro’s camera mounts for expanded versatility.

“The Zeus Mini brings to lighting what the Hero camera brings to cameras—incredible versatility, design as well as performance,” said Nicholas Woodman, founder and CEO of GoPro. “Once you start using the Zeus Mini, you realize how convenient it is during so many situations. I now keep one in my car, one in my toolbox and also one in my backpack for on-the-go readiness. It’s addictively enabling.”