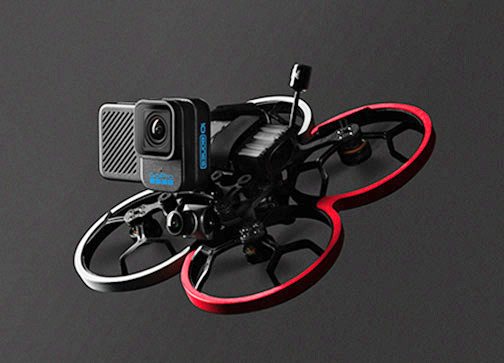 Moreover, it utilizes GoPro’s flagship imaging pipeline, including the high-performance GP2 processor and HyperSmooth 4.0 technology. Consequently, the camera delivers the same image quality and video frame rates as the Hero10 Black action camera. However, it is packaged in a minimalistic, lightweight enclosure specifically for FPV use.

“Bones is an important step in our strategy to leverage GoPro’s core camera-technology to produce derivative products that address the needs of a specific audience of customers,” said Nicholas Woodman, GoPro founder and CEO. “Bones delivers Hero10 Black image quality and performance in a lightweight body that is ideal for aerial cinematography.”

Weighing in at less than 2 ounces, the FPV camera is the lightest GoPro ever. A solution for 3-inch class and larger drones, it provides only the essentials for FPV enthusiasts. Housed in a well-ventilated enclosure, the camera delivers GoPro’s best image quality and stabilization per gram of weight.

The camera also offers multiple ways to control it. Pilots can use the two physical buttons on the camera; the Quik app; GoPro Labs QR codes; GoPro’s the Remote; or a drone’s transmitter.

In addition, its setup is easy. Users can mount it on drones with a single screw boss. Plus, it comes with an optional in-box adapter for the GoPro mounting ecosystem and utilizes a standard FPV industry connector.

Furthermore, the camera ships with a license for GoPro’s Emmy Award-winning ReelSteady video stabilization. This technology is now part of the new GoPro Player + ReelSteady desktop application. As a result, FPV pilots can unlock GoPro’s smoothest, silkiest FPV footage ever. They also have access to premium tools like lens correction and batch export within the new app.