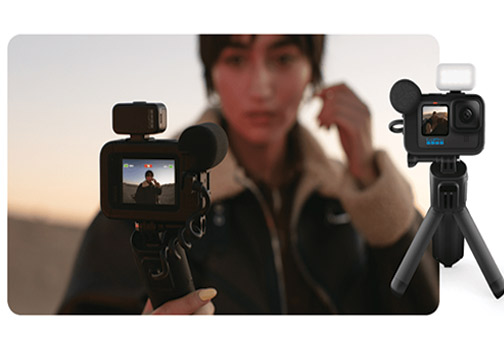 “Hero10 Creator Edition is like having Hollywood in your hand. It’s the perfect setup for recording professional-quality video when vlogging, filmmaking or even livestreaming,” said GoPro CEO and founder Nicholas Woodman.

“Leave the extra batteries and gear behind; all you need is the Creator Edition and you can create cinematic magic—all day long. You’ll have to recharge and refuel yourself before you even think about recharging your GoPro.”

In addition, the bundle includes the Volta battery and remote control grip. It has built-in camera buttons that let users control the camera with one hand.

What’s more, it powers four hours of 4K recording at 30 frames per second. Users can also detach Volta and use it as a wireless remote from up to 98 feet away.

Also in the kit are two Mod accessories. First, Media Mod features a built-in directional microphone for enhanced audio; two cold-shoe mounts; as well as ports for 3.5mm mic and HDMI-out. Second, the Light Mod is an LED light with four levels of brightness up to 200 lumens.

This stand-alone premium battery grip provides more than four hours of 5.3K recording at 30 fps. An integrated 4900 mAh battery combines with the camera’s standard battery to triple its normal battery power. Plus, camera buttons give users one-handed control of the Hero10 while it’s attached to the grip.

Also featured are built-in tripod legs. Users can flip out the legs any time they need to set the camera down to capture extended time-lapse footage and other stationary shots. In addition, 35% of its plastic parts are made from recycled materials; the Volta is also weather resistant.

The Volta is also compatible with the Hero9 Black. In addition, it will charge any USB-C-compatible device, including GoPro MAX and older GoPro cameras.