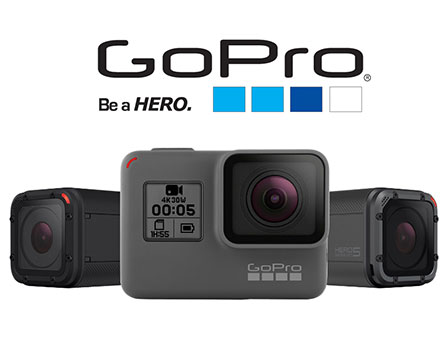 Additionally, the action cameras are now waterproof to 33 feet without the need for a separate waterproof housing. They also feature voice control, image stabilization, simplified controls and improved battery life.

Also new to both cameras is the ability to capture non-fisheye perspectives as well as the traditional wide-angle look for which GoPro is known. Both the new Black and Session are compatible with GoPro’s new Karma drone and handheld stabilization system.

The company touts its new Hero5 Black as the most powerful, easy-to-use GoPro ever. It features a 2-inch touch display with simplified controls, including one-button operation, as well as voice control supported by seven languages.

A new feature is the ability to capture distortion-free wide-angle video and photos with its linear-view setting. All content can be auto-uploaded to the cloud when the camera is charging. And the camera has built-in GPS and is compatible with all existing GoPro mounts.

The GoPro Hero5 Black has suggested retail price of $399.99.

The Hero5 Session shares the same small design and convenience features of the original Session camera. However, it offers performance upgrades. These include 4K video recording at 30 fps and 10MP photo capture. It also offers the same electronic video stabilization, auto-upload function, voice control, linear-view setting and one-button operation of the Hero5 Black. It, too, is waterproof to 33 feet without a separate housing and is compatible with GoPro mounts and Karma.

GoPro’s new products and services are designed to simplify the capture, editing and also sharing of engaging content. As an end-to-end storytelling solution, GoPro now complements its new Hero5 cameras and GoPro Plus cloud service with updated versions of its mobile and desktop apps.

Editing as well as sharing videos is now made easier with Quik, GoPro’s editing app for mobile and desktop. As the name implies, Quik was created to enable users to quickly produce high-quality videos that are easy to share. gopro.com