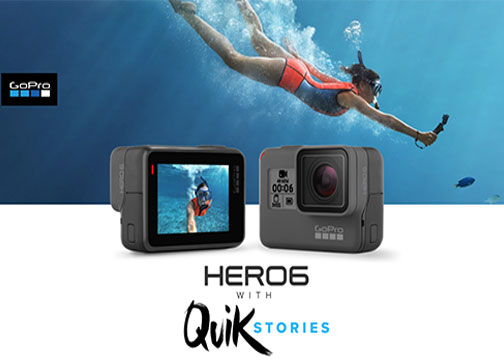 In addition, new mounts and accessories, plus a new follow mode for the GoPro Karma drone, were announced.

Woodman introduced the Hero6 Black as “the most powerful and convenient GoPro, yet.” Powered by GoPro’s custom-designed GP1 processor, the action camera is said to achieve “an entirely new level of performance, including stunning 4K/60 and 1080p/240 video recording.” In addition, the camera uses the most advanced video stabilization system ever employed in a GoPro camera.

“Hero6’s next-level image quality, video stabilization and three times faster QuikStories performance makes it a powerful storytelling extension of your smartphone,” said Woodman. “It’s never been easier to live it, then share it . . . using a GoPro.”

QuikStories is an app feature designed to make it easy to share short videos. The Hero6 is optimized for QuikStories with three times faster Wi-Fi speed. This means captured footage will transfer more rapidly from a GoPro to a connected phone, where the GoPro app will automatically create QuikStory videos. Woodman added that the “Hero6 Black and the GoPro app automatically transform your adventures into cinematic QuikStory videos you can share with the world.”

In addition, the camera’s upgraded video functions are packed into a rugged, waterproof (to 33 feet), go-anywhere design. The Hero6 also has dramatically improved dynamic range and low-light performance, as well as an added digital zoom.

Key features include: an all-new touch zoom; 5GHz Wi-Fi; compatibility with the Karma drone and existing GoPro mounts; and voice control in 10 languages. Furthermore, the Hero6 Black boasts RAW and HDR photo modes; GPS, an accelerometer and gyroscope; and built-in Wi-Fi as well as Bluetooth connectivity.

GoPro’s Hero6 Black is available for a suggested retail price of $499.99.

The GP1 was developed from the ground up to maximize a GoPro camera’s capabilities. The processor is engineered to enable twice the video frame rates, improved image quality, dynamic range, low-light performance and dramatically improved video stabilization over previous generations.

In addition, the GP1 automates all of these benefits, allowing users to capture videos and photos without changing image settings. It also advances GoPro’s capabilities in computer vision and machine learning, enabling the Hero6 to analyze visual scenes and sensor data for improved automated QuikStories.

Built to capture immersive 5.2K spherical content, the waterproof (16 feet) GoPro Fusion marks the beginning of a new era for GoPro. “Fusion captures everything around you, so you’ll never miss the shot, and gimbal-like stabilization makes it all shockingly smooth,” Woodman added.

Moreover, with the GoPro app, users can play back and share footage as VR (virtual reality) content. Or they can use the app’s OverCapture feature to recapture 360º footage and share a spherical shot as a traditional fixed-perspective video. The OverCapture mobile experience will be part of a new version of the GoPro app that will be available for iOS and Android in early 2018.

The GoPro Fusion will work with most GoPro mounts, and it also includes the Fusion grip mount. Users will also be able to edit captured content via the bundled Fusion Studio desktop software, which will be available when the Fusion ships.

The GoPro Fusion spherical camera is currently available for preorder. It has a suggested retail price of $699.99.

The Karma drone, which is compatible with the new GoPro Hero6 Black, features two new auto-shot paths: follow and watch. Using GPS, Karma can now automatically follow the Karma controller while pilots are on the go, keeping them framed in the shot. In addition, the watch auto-shot path will keep Karma hovering in place while it rotates, keeping the Karma controller in frame wherever it goes.

Other new Karma updates include an expanded cable-cam auto-shot path and “look up” camera tilt capability. Current Karma owners can unlock these new features via a firmware update, which is now available. gopro.com