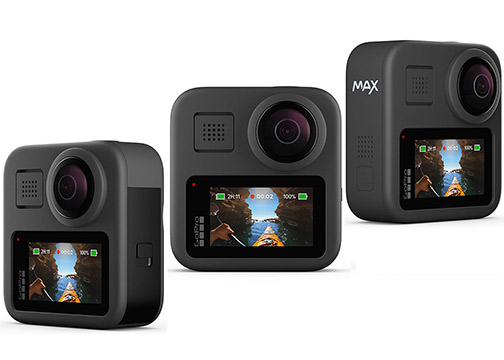 San Mateo, CA—Waterproof to 16 feet, the versatile GoPro Max can be used as a single-lens, stabilized Hero action cam, a dual lens 360º camera or a vlogging camera. Users can switch between traditional Hero-style video and photo or immersive 360º footage.

In addition, it takes its features to the “maximum.” Max HyperSmooth provides next-level stabilization and in-camera horizon leveling, eliminating the need for a gimbal. Max TimeWarp, in 360º and Hero modes, bends time and space with expanded control and performance over traditional TimeWarp. Moreover, Max SuperView delivers GoPro’s widest, most immersive field of view.

Also, when creating 360º edits, users can benefit from “reframe,” the GoPro app’s new keyframe-based editing experience. This function makes it easier to reframe 360º footage into a traditional video with smooth pans and transitions. Reframe is also said to match the power of desktop 360º editing solutions, but with the convenience of the GoPro app.

Furthermore, when it comes to vlogging, the Max provides four digital lenses for the ideal “look”; a front-facing touch screen for framing; and six mics that enable shotgun-mic audio performance.

It also features one-click 270° PowerPano with in-camera 360º video and photo stitching of 6.2MP photos. This provides panoramas without the pan; users can take 270° distortion-free panoramic photos without having to scan the horizon.

And with a GoPro Plus plan, the Max provides auto backup to the cloud. $499.