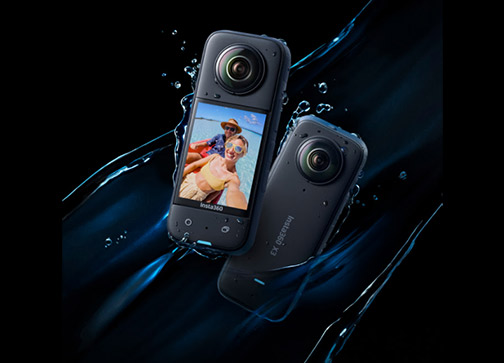 “With the X series, we are reinventing the point–and–shoot camera to make it easier for anyone to be a creator. X3 is built to help the next generation of creators take their creativity to new heights,” said JK Liu, founder of Insta360.

The camera can capture 5.7K 360 video with active HDR and an invisible selfie stick effect, or 72MP photos. The X3 doubles as a standard action cam with single-lens mode upgraded to ultrawide 4K. For editing shots, the Insta360 app is an AI application with intuitive reframing tools.

The X3 allows users to shoot first in 360º and then reframe later. As a result, they can edit a single video in different ways. And thanks to 360º capture, users can turn a 4:5 Instagram post into a 9:16 TikTok video in a tap without losing any quality.

The camera’s 360º video quality also got a boost with the new active HDR mode, powered by the camera’s 1/2-inch, 48MP sensors. Active HDR uses a new algorithm to stabilize action footage; it minimizes ghosting and reveals details in over– and underexposed areas.

Furthermore, its dual lens design enables effects like the invisible selfie stick. Subsequently, the stick is automatically stitched out of the footage, creating third-person views. In addition, with the new me mode, shooters can now shoot invisible selfie shots at 60 frames per sec without reframing. Me mode frames the footage to focus on the shooter, while keeping the selfie stick invisible.

In addition, bullet time is a Matrix-like slow motion effect made possible by swinging the camera over the head in a circle. It also got a boost in resolution and frame rates to 4K 120 fps and 3K 180 fps.

The Insta360 X3 maintains the same candy bar shape as its predecessors. However, it adds upgrades to make it easier to operate, especially during the action. These include a 2.29-inch tempered glass touchscreen for intuitive settings adjustments and previews. Four buttons also make it easy to control the shot even when gloved up.

In addition, new direction focus audio ensures the audio follows the action, even when reframing. The camera also boasts a new 1800mAh battery and is waterproof down to depths of 33 feet out of the box.

The Insta360 mobile app uses AI technology to democratize content creation. The company’s goal is to put tools and effects at creators’ fingertips that might otherwise take years to master.

In Shot Lab, creators can find 30+ viral-worthy effects they can edit in a few taps. They range from the goofy nose mode to the new cinematic street lapse and sky swap.

How shooters choose to reframe their video is also up to them. They can physically move a phone in the direction they want to point with snap wizard. Or they can select a target to track with Deep Track 2.0. In addition, they can let the AI pick out the highlights with the auto frame function. Plus, the new photo animator will animate a static photo for them.

For creators who prefer a desktop workflow, Insta360 Studio is also offered.

The Insta360 X3 is available now for preorder. It has a suggested retail price of $449.99. Accessories sold separately include lens guards, an invisible cold shoe, a mic adapter and the quick reader.