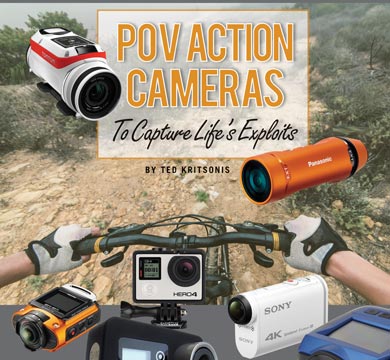 The POV action camera market has essentially gone mainstream. There are now cams from a number of manufacturers ranging in price and sophistication, and various retailers stocking shelves with them. Resolutions are bumping up to make 4K Ultra HD video footage both practical and usable. And slimmer profiles make the cameras easier to deploy.

Growing proliferation of action cams and sharing via social media is making action footage more ubiquitous, as more consumers begin to adopt these rugged, little cameras. Here’s a look at the latest POV cameras the market has to offer.

The unofficial action cam king stuck to its guns in 2015, adding a third device in its Hero4 line. The addition of 4K recording at 30 frames per sec, 2.7K at 60 fps, 1440p at 80 fps, Full HD 1080p at 120 fps and 720p at 240 fps covers the gamut of resolutions. And QuikCapture makes for faster one-button operation to power on and record with a single one-second press.

The line introduced night photo and night lapse modes for adjusting exposure when shooting in low light or at night for single photos and time-lapse photos. An auto low light mode was included to perform a similar function without manual control. SuperView widens the angle to capture more of the background; HiLight Tag shortens the editing process for quick clips by marking key moments.

GoPro added Protune as a means to compressing footage, with manual control over color, ISO, exposure, white balance and sharpness; it can also be applied to photos. The Black and Silver Hero4 editions have waterproof bodies to depths of 131 feet.

The addition of the Session is meant to “simplify” the GoPro by slimming down to half the size of the other Hero4 cams. It’s also 40% lighter. It doesn’t go above 1440p at 30 fps or 1080p at 60 fps, but it does shoot 8MP stills. Three included mounts widen the scope of shooting positions. Battery life also tops out at two hours of continuous footage on a charge. It’s waterproof to 33 feet.

With IPX4 certification, it is splashproof but not waterproof. That can be rectified with the included waterproof case that’s good to depths of 33 feet. However, the camera can’t focus while submerged, requiring the Dive Door accessory to make that possible.

The camera records in MP4 and the XAVC S video format that Sony claims is ideal for shooting with higher bitrates. Built-in SteadyShot image stabilization is said to boost electronic IS by three times. This makes it particularly effective at reducing shake when mounted on motorsports vehicles and drones.

Live streaming footage is possible thanks to Ustream being baked in for broadcasting to friends or family who can tune in via a web browser; but the camera must be connected via Wi-Fi to a mobile device or hotspot. Plus, a live-view remote wristband accessory does as it implies, displaying a live view when paired to the cam via Wi-Fi. The same functions apply, including previewing video and 8.8MP photos and controlling playback. Five cameras can be synced with it at one time.

TomTom’s first foray into the POV camera market uses a form factor that borrows from a number of other manufacturers, albeit with a unique design and mounting system. The Bandit is technically capable of shooting in 4K, except it maxes out at 15 fps. Users can go to 2.7K at 30 fps, though faster footage is possible with 1080p at 60 fps or slow motion in 720p at 120 fps. The image sensor can also capture 16MP stills. And its lens rotates, making placement far more flexible.

The camera features a two-piece setup, called the “Batt-stick,” that slides out to reveal the microSD card slot and a USB connector to charge the integrated battery and transfer content to a computer. With the unique mounting system, TomTom offers different options to cover the most common deployment needs.

The Bandit app for iOS and Android includes the “Create a Story” feature, where shaking the phone/tablet splices together clips for a quick video montage. Adding an overlay or background music is another option. $399.99. tomtom.com

Ricoh Imaging upped the ante with the WG-M2. The compact camera has an ultrawide 204º lens and captures 4K video. Lighter and 40% smaller than previous models, it boasts new features to ensure performance in extreme conditions.

And simple video-editing functions are provided.

It’s waterproof to a depth of 65 feet, shockproof against a 6.5-foot fall and freezeproof to 14° F. New is video orientation, a function that ensures video is recorded upright if the camera is mounted sideways or upside down. Large control buttons make the cam easier to operate. And a new start-stop control mechanism vibrates to confirm when recording is started or stopped. A 1.5-inch color LCD allows viewing during recording or playing back video on the go.

For remote control and transfer, the WG-M2 syncs via Wi-Fi to a smartphone or tablet using the Ricoh ImageSync app. Ricoh offers a host of mounts and accessories that attach the camera to helmets, handlebars, etc., for use during sports and outdoor activities. $299.95. ricohimaging.com

The Virb XE has a different look than its predecessor’s modified cylindrical design, sporting instead more of an upright squared form factor. It doesn’t shoot in 4K, maxing out at 1440p at 30 fps, 1080p at 60 fps and 720p at 120 fps. Going with even slower motion at 240 fps falls below HD quality to 480p. Still images can be shot at 12MP.

Garmin is pushing the connectivity and rugged features of the camera, particularly with what it calls G-Metrix. The Virb XE is outfitted with built-in GPS and G-force orientation sensors, yet it is capable of working with external sensors to pack in more performance data that can be displayed when transferred and played back through the Virb iOS and Android apps.

It’s also waterproof out of the box, to about 160 feet. The lack of a casing is said to record better audio when underwater because of the exposed microphone. $399.99. garmin.com

Like its name suggests, the Stealth 2 is lighter and nimbler in size, making it easier to carry. However, to make it pocket-size, Drift had to sacrifice some functionality, like a lower 30 fps frame rate at the highest 1080p setting. It can’t do 60 fps and isn’t incapable of shooting in slow motion in even HD resolution. It can capture 12MP stills.

A 300º rotatable lens lets users position it at various angles to maintain a straight image. The two-way remote unit controls recording and playback. A color-coded screen that indicates the mode complements a front status LED.

The Stealth 2 isn’t waterproof out of the box, but it is considered water resistant. A separate casing can fully protect it when submerged, though the body is already built to withstand rain, snow, dust and mud. Using built-in Wi-Fi and the Drift app for iOS and Android, a smartphone can act as a remote, viewfinder or basic editor. $199. driftinnovation.com

Panasonic crafted its smallest action camera to date with the HX-A1. Slimmed down and trimmed down, it’s primarily designed to be worn rather than mounted on a surface. Despite leaning toward placement on one’s person, optional mounts do make it easier to attach to boards, bars and other objects.

Offered as a more affordable option for

adventurous users, it shoots in 1080p at 30 fps, 720p at 60 fps and 480p at 120 fps. It doesn’t shoot photos natively, though stills can be plucked from video clips using editing software.

Waterproof down to 5 feet, shockproof to withstand a fall of 5 feet and dustproof as well as freezeproof, the camera is fairly rugged out of the box. A “wireless twin camera” feature allows for pairing it with compatible Panasonic camcorders via Wi-Fi for dual-angle picture-in-picture recording. $179.99. panasonic.com

The Ego LS 800 is a unique entry into the category for the simple reason that it’s the first POV action camera offering live streaming over 4G LTE through Verizon. As an addition to built-in Wi-Fi, wireless connectivity allows users to broadcast footage live through the network. It does this using a sled housing the SIM card, which plugs in underneath the camera. However, a separate Verizon data plan is required to make this network feature work.

Beyond that, it doesn’t shoot at the highest resolutions, topping out at 1080p at 30 fps and 720p at 60 fps. It can’t shoot in slow motion but does capture still images at 8MP, including in burst and continuous modes.  Water resistant, the LS 800 doesn’t have a ruggedized body to work underwater or withstand the elements.

The Liquid Image Live app for iOS as well as Android acts as the live stream arbiter, controlling various features and offering a quick view of all recorded video and photos. $399.99. liquidimageco.com

An interesting design for iON, the Game is a sports-focused camera that isn’t entirely about POV shooting on one’s person. Rather, shooters can capture others in action. iON has pushed this model as a way to monitor sports performance and mechanics. Using PowerChalk, a cloud-based sports motion Telestrator that can bring together coaches and players, even when they’re in different places, the Game is capable of sharing and live streaming footage.

It records in 1080p at 30 fps as well as 720p at 60 fps, and shoots 5MP stills—all seen in live view through a 2-inch, color LCD screen. A rubberized plastic frame makes it waterproof to 10 feet deep. Built-in Wi-Fi can broadcast the Game’s footage through PowerChalk, or upload it to 10GB of free cloud storage. With the iON Camera app for iOS and Android, users can also share to Facebook and YouTube.

A ball joint mount, CamLock and also helmet mount come in the box. Other mounting solutions are sold separately. $199.99. usa.ioncamera.com