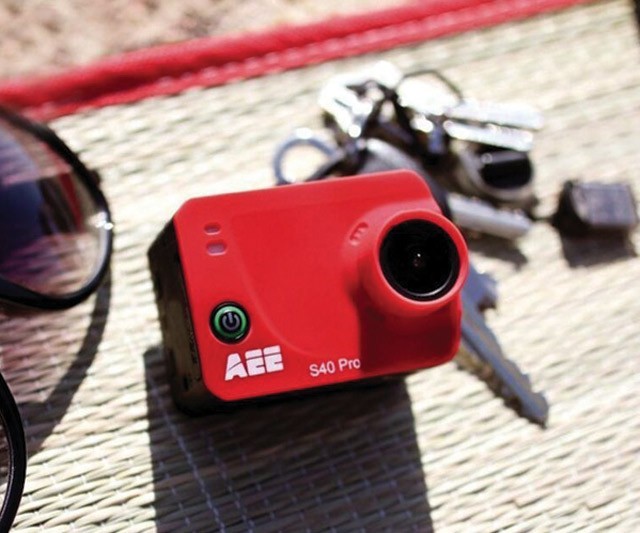 Los Angeles, CA—AEE Technology, a maker of action cameras and drones, released their newest action camera: the S40 Pro. The new cam, which sports a bright red casing, “compares favorably to other action cameras on the market, such as the GoPro Hero4 Session,” at a price that’s more than half off the Session, according to AEE.

“The S40 Pro came to fruition when we thought about the average action camera consumer,” said CEO Andy Zhang. “We wanted to create a camera that even a novice user can have fun with, at a price that anyone can afford. The S40 is the perfect first camera in an attractive red color that helps make it stand out from the crowd.”

The S40 Pro is one of the lightest action cams on the market, weighing in at 2.5 ounces. It features: Full HD 1080p video recording at 30 frames per sec (fps); 16 megapixel still photo capture; 8-fps burst shooting; a 10x zoom (with screen attachment); a 130º angle lens; 180º image rotation; and a built-in 1250 mAh lithium battery, which records up to three hours of footage.

The action cam also enables time-lapsed videos and images, shooting at 1-, 2-, 5-, 10- and 30-second intervals. The camera uses a microSD 64GB card and is Windows XP SP2/Vista/Win 7 or above and Mac OS compatible.

AEE Technology’s S40 Pro is compatible with more than 40 available accessories, including a 40m waterproof housing, and retails for $150. aeeusa.com