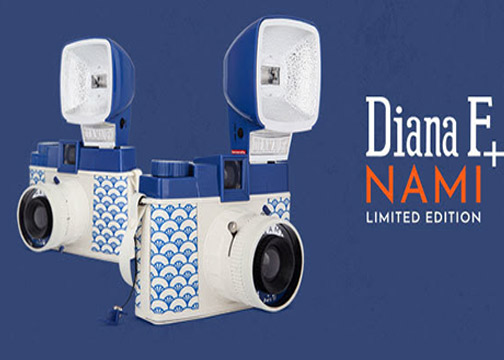 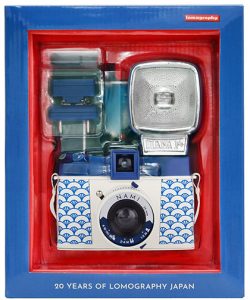 A recreation of the 1960s original, the Diana F+ camera seduces with saturated square shots on 120 film. Now Lomography has given her a brand-new look. Lomography delicately decorated the new edition with the Seigaiha wave—an ancestral Japanese motif. The wave symbolizes power, resistance as well as tranquility.

“Our Diana cameras are known and loved for their signature, color-drenched images with stylized vignetting. Moreover, their unpredictable nature is what makes them the undisputed queens of analog experimentation,” the company announced.

The Diana F+ Nami edition’s functionality includes pinhole and panorama photography. In addition, there is an entire line of Diana F+ accessories for extended experimentation. These comprise interchangeable lenses, including telephoto, wide-angle, close-up and fisheye. Lomography is also offering splitzers and cable releases.

The company first reinvented the iconic Diana back in 2007. From there it extended the family with special edition clones. They created the Diana Mini and Diana Baby to reproduce her aesthetics on 35mm as well as 110 formats.

In addition, Lomography offers a wide range of film to load in their analog cameras. In fact, whether photographers want to experiment with high-contrast color negatives, color-shifters, fiery red scales or bold black and whites, there is a Lomography 120 film for use in the new Diana F+ Nami camera.

The Diana F+ Nami comes with a flash as well as a tripod mount. In addition, it does not require batteries. The medium-format camera retails for $89.

The Lomographic Society International was established in Vienna in 1992. Moreover, it is a globally-active organization dedicated to analog, experimental and creative photography.

“Through our constantly expanding collection of innovative films, cameras, instant products, lenses and photographic accessories, we’re dedicated to designing and producing all the photographic tools you need to create, capture and communicate this curious world we live in,” the company stated.