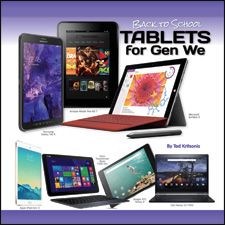 Tablets are slowly becoming more than just screens to view content, now that they are powerful enough to create and manipulate it as well. The endless supply of apps changes the usability of a tablet in a number of ways, making it possible for those studying almost any subject to do something practical with it.

The various screen sizes and growing list of accessories help add a greater level of choice and functionality. Options abound, and here are some of the standout tablets available for Back to School shoppers.

Apple iPad mini
The iPad mini 3 offers much of the same look and feel of its bigger brother, and the Retina display continues to be among the best on the market at a 7.9-inch display size (2,048×1,536 resolution, 326 ppi). Thin, light and vibrant, the mini is easier to carry around than the larger iPad Air 2.

The mini 3 has been outfitted with some of the best hardware and software features Apple currently has. The 64-bit A7 processor is robust enough to handle rich apps like Pixelmator and iMovie, while the 5 megapixel iSight HD rear camera is good enough to take some decent photos and video clips. Photo modes include panorama and time-lapse capture, with face detection, exposure control, filters and built-in editing apps.

Other staples, like Touch ID and FaceTime, are standard. There are countless accessories for the mini 2 and mini 3, ranging from keyboards to music equipment, so finding a unique use case isn’t hard to do. As a leisure device, playing games, surfing the web, streaming video and reading e-books is just scratching the surface of what can be done here. iPad mini 2, starts at $299; iPad mini 3, starts at $399. apple.com

Samsung Galaxy Tab A
The Galaxy Tab A with Wi-Fi isn’t Samsung’s flagship, largely due to a 9.7-inch display that maxes out at a resolution of 1,024×768 (just 132 ppi). While this may seem unfairly low, it may not matter to students who want a bang for their buck. This is also where the 8-inch model comes in, which sticks to the same design principles, including the same 720p screen resolution.

Samsung users would feel right at home with the software mix of Android Lollipop and TouchWiz, a balancing act that works well, for the most part. The 16GB of internal storage can be expanded by using the microSD card slot, going all the way up to an extra 128GB.

The addition of the S Pen, which slides out of its holster in the back, adds another input element to this tablet, essentially bringing the stylus experience of Samsung’s Note line to these affordable models. For those interested in photo features, it provides a 5MP rear camera and 720p HD video recording. 9.7-inch, $329.99; 8-inch, $229.99. samsung.com

Google HTC Nexus 9
Being a Nexus device, this tablet gets the “vanilla” Android treatment, untouched by any software overlays from a manufacturer. Despite HTC making this tablet, its Sense user interface is nowhere to be found here. The 8.9-inch, 1440p IPS display is crisp and vibrant, making it easy to enjoy any content viewed on it.

Its 64-bit Nvidia Tegra K1 processor is more than adequate for basic tasks, though it can also handle more demanding apps and games that require more power to run smoothly. With 16GB or 32GB models to choose from, there is no microSD card slot to expand further on that, though users could utilize cloud-based storage services to help with the need for more space.

The matte rubberized back does provide a more secure grip, making it less susceptible to sliding out of one’s hands. Its 8 megapixel camera isn’t particularly adept, which likely wouldn’t matter for those who don’t really snap photos or video using a tablet. Starts at $399.99. htc.com

Microsoft Surface 3
Having now shed the “RT” moniker, Microsoft has given the Surface 3 more tools out of the gate, continuing to tout the device (and the whole Surface line) as the best of both the laptop and tablet worlds. By moving over to a full version of Windows 8 (with a free upgrade to Windows 10), desktop programs that wouldn’t have worked on the RT version are perfectly viable now.

The 10.8-inch, touch-screen display has a resolution of 1,920×1,280. By laptop standards, the 64GB or 128GB of internal storage may seem paltry, but a microSD card slot does offer the chance to expand that more than twofold. And there’s a full-size USB 3.0 port for convenience. It, too, has an 8MP rear-facing camera with autofocus.

Unfortunately, the Type Cover keyboard doesn’t come included with the device and will set buyers back $129.99. Getting the most of its functionality all but requires it, especially for the productivity it offers. The Surface Pen is also a separate purchase, $49.99, for those looking to have another productivity choice. And the “palm block” technology doesn’t register a resting palm as a touch while writing or drawing. Starts at $499.99. microsoft.com

Amazon Kindle Fire HD 7
The Kindle Fire HD 7 continues Amazon’s annual release of an affordable 7-inch tablet that offers a gateway into the company’s various services. This includes the Appstore, FreeTime, Prime Instant Video and free unlimited cloud storage for all Amazon content. Users can also access Kindle Unlimited, including a 30-day trial to test it out before choosing to commit or not.

Textbooks can be bought or rented directly from the device for 60%–80% less than regular price. WPS Office is able to read and execute Microsoft Office documents, and there is a specially made keyboard for the HD 7 designed to make that kind of productivity easier to manage. Files generated or uploaded to the tablet can be saved for free through the company’s own cloud services. With only 8GB or 16GB of internal storage to choose from—and no expandable memory card slot—the cloud figures prominently with this device as the only other storage avenue.

Dell Venue 10 7000
There are two unique design standouts for the Venue 10 7000—the 10.5-inch OLED Quad HD display (2,560×1,600) and the 7000mAh cylindrical battery that lines one of the edges. The brushed aluminum body gives the device a degree of flair and quality, somewhat helping to justify its price tag.

Internal storage is only 16GB, so a sizable microSD card is necessary to expand on that. The fact it can handle 512GB cards adds a great deal of flexibility in saving media files and documents away from its own storage, which can be allocated for apps instead. Dell says, “Advanced photo editing is easier than ever with the integrated Intel RealSense Depth camera and the new Dell Gallery.” Lytro-like refocusing after photo capture is possible, as is applying selective filters with a touch of a finger. But battery life isn’t particularly high at about seven hours or less.

Dell likes pushing the idea of using this as a hybrid via an optional keyboard that clips in with magnets along the cylinder. Running on Android 5.0 Lollipop, apps and games do look great on the high-contrast display. 16GB, $499; with keyboard, $629. dell.com

Asus Transformer Book T300 Chi
This Windows-based hybrid is designed to offer as much of a PC experience as possible, though it’s probably best to view it as a tablet that can work with a keyboard. The Intel Core M processor does help push the device to eke out more power under the hood, and a number of standard ports add a greater level of connectivity than the typical tablet.

Even with 64GB or 128GB onboard, storage expansion is an option to grow that further, since the Windows installation does eat up a significant chunk of space. Having 8GB of RAM does help the cause when multitasking or running more demanding desktop applications. And there’s merely a 2MP front camera.