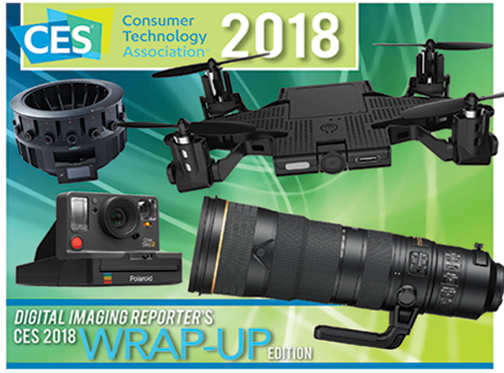 This year’s CES again broke records (yes, simply CES: the world’s largest consumer electronics show dropped all previous variations of its name last year). Close to 170,000 people checked out the product and services of some 3,900 companies. And those products included even more impressive technology.

Continuing the trend from the last few years, the Internet of things (IoT), home security, robotics and drones again dominated the show. There was also a wide spectrum of personal mobility devices and transportation options. They ranged from electric skateboards, hover-boards, bicycles and scooters to smart cars, semitrailer trucks and a pilotless personal flying vehicle that was somewhere between a drone and a helicopter.

This was the first year that driverless taxis were being demonstrated on the streets of Las Vegas. Aptiv, a company that specializes in self-driving technology, teamed up with the ride-share company Lyft to run BMW 5-series driverless sedans as a taxi service throughout Vegas. This was only the second time that such taxis had been put into active service on the streets of a major U.S. city.

Interestingly, the city of Las Vegas set aside a predetermined route in the East Fremont Street area for a small fleet of driverless minibuses that took passengers around the area, to demonstrate the concept of driverless vehicles to the general public.

As might be expected, there was a lot of interest in virtual reality and augmented reality. VR and AR were everywhere at CES. There were virtual reality presentations throughout the show. In so many different booths you could see people with headsets on, either individuals or large groups, seemingly navigate, drive or fly through make-believe worlds.

While augmented reality wasn’t quite as dominant as VR at the show, it was also being demonstrated. To show the power of its processors to handle AR, Intel had an underwater world of sea creatures swim through and around the real-world artificial intelligence wall that it had set up at its massive booth.

AR was being utilized in all sorts of ways. One company, Magik, was using augmented reality to provide a richer tooth-brushing experience for kids. However, one of the issues that came up is that AR will undoubtedly increase the amount of time kids will be spending on viewing devices as they’re pulled into AR experiences. This comes at a time when child development specialists are urging parents to reduce the amount of time their kids spend on electronic devices.

Many companies at the show brought in specialists to demonstrate and endorse their products. In most cases, crowds of various sizes casually listened to what these specialists had to say.

However, when Nikon brought in astronaut Scott Kelly to talk about his experience in space, his year on the space station and his photography of Earth from above, Nikon’s demonstration area was filled to standing room only. In fact, the overflow crowd blocked adjacent isles.

It was one of the best presentations at CES. (NASA recently upgraded from the Nikon D4 to the D5 DSLR, which significantly enhances the agency’s space image-capturing capabilities.)

While some camera manufacturers were waiting for the WPPI show in Vegas in February, Nikon made a major introduction. It unveiled the super-telephoto, FX-format AF-S Nikkor 180–400mm f/4E TC1.4 FL ED VR with Nikon’s first built-in teleconverter.

Priced at $12,399.95, this remarkable, massive piece of metal and glass incorporates a 1.4x teleconverter that extends the focal length range to 252–560mm with the loss of only one f-stop.

Another major player in imaging, Panasonic only had one camera model on the showroom floor—the mirrorless Micro Four Thirds Lumix GH5S. You couldn’t just come by the booth and play with it; you had to make an appointment to get your hands on it.

The magnesium alloy, weather-resistant GH5S is designed around a 10.2MP MOS sensor that supports 14-bit RAW shooting and includes some significant improvements over the GH5, which was introduced last year. The GH5S has an ISO range of 160–51,200 (with dual native ISOs of 400 and 2,500) and it employs the company’s Venus 10 image-processing engine.

The ILC supports shooting speeds of 12 frames per sec and an electronic shutter speed that goes all the way up to 1/16,000 second. It also has dual storage slots and features face-detection technology, extended bracketing capabilities and a touch screen. Unfortunately, it doesn’t include image stabilization, but many of the lenses available for it incorporate IS.

Many of the capabilities of the “hybrid” GH5S were aimed at enhancing video capabilities, particularly in low-light situations. The camera records cinema 4K 60p (4,096×2,160 at 60 fps) and Full HD 1080/240p video. For professional applications, it supports timecode in and out for multi-camera synchronization, and it includes a variable frame rate function for time-lapse and slow motion video. It has an SRP of $2,499.95.

Smaller camera equipment manufacturers were also quite present. One company that has been building a strong reputation with its imaging products is YI Technology. It had a whole range of cameras on display, from dash cams and inexpensive consumer products to high-end, high-priced VR equipment.

YI showed the Halo, an advanced 3D 360º-capable camera with 17 integrated action cameras. Sixteen of those cameras are situated in a circle, making the unit look a little like two circular slideshow trays stacked on top of each other. The 17th is an up-camera that provides the full 360º coverage.

Each camera has an f/2.8 lens, a Sony image sensor and its own microSD card slot. Captured images are stitched in Google’s Jump Assembler for 8Kx8K resolution, while its 3D capture resolution is 2,500×4,400 pixels. Each hour of captured footage generates half a terabyte of data.

Moreover, Halo has a built-in, touch-screen LCD for direct control. The unit can also be controlled and images can be previewed through built-in 5GHz Wi-Fi and an Android smartphone app. The YI Halo is expected to retail for $17,000 when it starts shipping in 4Q 2018.

One of the things that sets consumer and professional video apart is the steadiness of the shots. Unfortunately, consumer video is often ragged and jumpy, while professional video is smooth and steady. The difference is that pros use gimbals to steady their cams. Judging by the number of steadying devices for

smartphones and consumer cameras that camera accessory manufacturers had on display, it’s obvious that the problem of rough consumer video is an issue.

One company that has taken steady cam photography a step further than just making a steadying accessory is Removu. It incorporated a gimbal directly into its compact 4K video camera. The Removu K1 captures 4K Ultra HD video at 40 fps and can take 12MP still images with a maximum resolution of 3,000×4,000 pixels. It supports time-lapse still photography as well as time-lapse and slow-motion video. Data can be stored on microSD cards or sent to smartphones via Wi-Fi.

For steady operations, it incorporates a motorized, 3-axis stabilizing handheld gimbal with tilt, pan and roll stabilization. Its small size and light weight (only 12 ounces) make it easy to carry the K1 along just about everywhere. The Removu K1 has a price tag of $429.

Polaroid is making a resurgence. The company had been a trusted name in photography and the undisputed leader in instant photography before being driven to bankruptcy—first by the advent of quick film processing (one-hour labs) and then digital imaging. In the last 15 years or so, the brand has been diluted by licensing to all sorts of products, some photography related, some not; some good, some not.

However, it looks like old Polaroid may be back, rebranded under Polaroid Originals. The revitalized company, with roots in the Impossible Project, is offering a series of not only refurbished but also new retro products. This includes a new instant camera incorporating its original instant film technology.

The OneStep 2 is based on the original OneStep camera that Polaroid introduced in 1977. The new instant film camera features a built-in flash (that’s USB chargeable) and a preset lens that focuses from two feet to infinity. It very much has the look and feel of the original model. In addition, it takes both the new i-Type film and the original 600 film. (The new film does not include a battery in the pack, like the original film did.)

Polaroid stopped producing instant film in 2008. But Polaroid Originals has been producing it for its new model, as well as for vintage Spectra, 600 and SX-70 cameras, which have become popular collectors items and artists’ tools. The OneStep 2 has a suggested price of $99.99, with eight-packs of instant film costing $15.99.

The world is getting closer and closer to when every one’s life will be continuously documented. At least, it seems that way. The Roader Time Machine is out to document activities even after they transpire.

The Roader is a small, white square camera worn on a lanyard. If you touch it, it captures not only what’s coming up but also what just happened. It stores the previous 10 seconds and the next 10 seconds. It has to continuously capture data so that it can go back 10 seconds in time. Moreover, it captures video in resolutions up to 1,088×1,088, with that video being sent directly to a paired smartphone. The wearable camera has an SRP of $199 and is expected to be on the market by Q2 2018.

Of course, the Roader isn’t the first mini camera to try to document life. And the clips it produces are very short. However, it is interesting to be able to capture something that has already happened. At this point, it’s more of a fun toy than a serious imaging device. But it is indicative of the trend that, at some point, people will be wearing miniature devices that are always on and always capturing data. This in itself is interesting, and a little scary.

CES is always overwhelming, and this year—the 51st year that the show has been staged—was no exception. But by all indications, it was a resounding success, and plans for CES 2019 are already under way. And while it offers less and less traditional imaging products, it definitely provides a peek at what the future may hold for image capture.