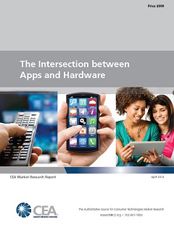 App-enabled devices continue to gain traction in U.S. households with smartphones, tablets and smart TVs among the top growth products, according to CEA’s 16th Annual CE Ownership and Market Potential Study (2014). Each category saw gains in ownership of at least six percentage points over 2013.

Both the Apple and Android markets offered more than one million apps at the beginning of 2014. According to data from Flurry Analytics in the report, messaging and social media apps enjoyed the largest year-over-year growth in terms of usage with a 203% increase going into 2014. Productivity apps also saw rapid growth (149%) as did music, media and entertainment apps (78%).

In general, according to the CEA study, app users are interested in apps with a high level of functionality (e.g., controlling other devices, 52%) and compatibility (i.e., working across various types of devices, 61%). While two-thirds of app users (67%) indicate they enjoy using apps, 59% believe the number of apps now available is overwhelming. Additionally, less than half (46%) of app users agree that apps remove the need to purchase separate electronic devices.

“There are several positive dynamics currently at play in the mobile device app market,” said Jessica Boothe, senior manager, strategic research at CEA. “While the advent of apps has negatively impacted some hardware markets, price and technical characteristics remain the primary purchase drivers of consumer choices among app-enabled devices, while the apps themselves still play an ancillary role.”

The Intersection between Apps and Hardware (May 2014) study was designed and formulated by CEA Market Research, a source of sales data, forecasts, consumer research and historical trends for the consumer electronics industry. ce.org