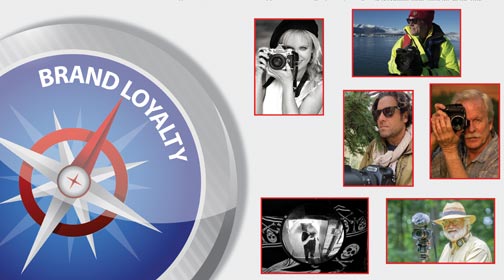 If I had to guess, I’d say that often a camera gifted or handed down by a relative establishes a career-long gear choice—a choice that’s validated by the brand’s ongoing development and quality.

Of course, a company’s technological attributes, especially when they coincide with the changing demands and opportunities of the marketplace, can attract a pro or bring about a change in what that pro carries.

I recently had a chance to talk with six noted photographers. Each is a member of a camera company’s elite group of professional shooters, and each had a story to tell about an enthusiastic affiliation.

Rick Sammon is quick to mention “the very good reason” that turned him to Canon in 1996. “Back then you really had to bracket your exposures,” he says, “and on the cameras I was using at the time, it was a two-step process—press a button on top, work a wheel on the back.” Canon had a wheel on the back—and still does—and with it, bracketing was a one-step process.

“Even today, I’m shooting in aperture priority with my thumb on that wheel so I can dial in the right exposure quickly and easily,” he says. “Sounds like a little thing, but if you want the best exposure and want to get it as fast as possible, it counts, big-time.”

Sammon also mentions “supersharp Canon lenses” and the support of CPS, Canon Professional Services. “You’re out shooting, you need something really quickly; it comes the next day. The backup and support they’ve demonstrated over the years—that’s what all Canon users, Explorers or not, really appreciate.” ricksammon.com

When she was 12, Dixie Dixon got a Nikon FG from her dad—“and that pretty much did it,” she says. “He always talked about image quality, and I got to actually see it for myself.”

Today she cites the way Nikon cameras and lenses render skin tones—“which is incredibly important for the fashion and commercial work I do”—and the sharpness of Nikon lenses. “I think their lenses are the sharpest glass I’ve ever shot with. When I first started out, as an assistant on weddings, often the photographer would prefer me to shoot with his gear. It was frustrating. I could never get a really sharp picture.”

Dixon points out two other benefits of Nikon association: “The great support of NPS [Nikon Professional Services] and the personalities of Nikon people. Most of the Nikon people I’ve met shoot, and they love to talk about photography—your work and theirs. They have a real passion for photography, not just for gear.” dixiedixon.com

“In 2002, I worked on the book A Day in the Life of Africa,” Jay Dickman says. “Olympus was the sponsor, and all the photographers were required to shoot with their [Camedia] E-20 digital camera.”

Dickman had a fondness for Olympus cameras from the film days. “The small form factor” took him back to “what 35mm photography was built around—a small, unobtrusive, quiet, high-quality and portable precision instrument.”

When the project was completed, Olympus approached. “They gave me their road map—where they were going and what they wanted to achieve,” he says. “They’d adopted the Four Thirds sensor, which gave every lens a two-to-one factor, and I liked that idea.”

After the E-20 came the E-1. Then came his current OM-D E-M1 and the “high-quality, compact lenses” that are so important to him because most of his work is international, and international travel is becoming more difficult all the time. “Eight airlines reduced carry-on size,” he explains, “and airlines overseas are starting to restrict what you can take on the plane. What dictates the size of your camera bag will be the size of the lenses you use.”

He finds he’s capable of outputting 30×40-inch prints for exhibits and sales. “The prints look amazing, and I can still get my gear on the airplane.” jaydickman.net

When the economy slowed and assignments diminished, Giulio Sciorio realized he had to develop an alternative to the advertising and editorial photography he’d been doing.

“It wasn’t a matter of how good you could shoot, or what gear you had; the content wasn’t meeting the needs,” he says. “People wanted screen media, not print. Smartphones were the point of consumption for content now, and I needed a way to create content for small screens.” The content he came up with was based on video, “and my DSLR, as good as it was for stills, wasn’t making it for video.”

So he moved to a Lumix Micro Four Thirds camera to produce what he first called motographs,” and what are now dubbed cinemagraphs.

“The camera was a natural fit for the work I needed to do,” he adds. “The reality was that the end result was no longer a magazine cover or a double-truck spread. The end result was somebody looking at my photo on Instagram while standing in line to get coffee, and looking at it in an image the size of a medium-format transparency.”

He now calls his video-based images “animated photographs,” and the phone is once again ringing. giuliosciorio.com

When Joey Skibel started shooting with the Pentax 645D about three years ago, he was looking for high quality and fast handling for his landscape work. And, he says, he got it—“greater dynamic range than I’d experienced with any DSLR and improved performance over my [previous medium-format brand].

“With the Pentax I was getting a quality ‘filmic’ look, like I used to get when I shot Fuji Velvia in a medium- or large-format camera. I was printing big, detailed gallery prints, 40×80 inches.” And, he adds, he was getting it all in a medium-format camera that was as easy to operate as a DSLR.

A little over a year later, he got to beta test the 645Z. “I was sold immediately. It had live view, an articulating screen and was much faster to work with. I could shoot almost all my jobs with it, and in fact I’ve added it to my kit for weddings for the formal portraits.”

He’s even returned to previously photographed locations and re-shot them with the Z. “I’ve gotten prints three times bigger from the Z files—prints that look better in every respect. That camera rivals 4×5.” joeyskibel.com

Bob Krist turned to Sony gear when his interest in video coincided with his clients’ growing demand for it. He found Sony cameras streamlined and quickened the process of video production, and even made one type of shooting possible for him.

“A client was asking if I could shoot some slow motion,” he says, “and at the time there was no frame rate for that with the DSLR I was using.” So he bought a small, mirrorless Sony and adapted a couple of his old lenses to it. “I was blown away by how small and light it all was, and by its quality.” Then he bought a couple of Sony lenses—“because they were tiny, too”—and a second body.

“Over the course of two years,” he says, “I found that I had de facto switched systems from my DSLR brand to mirrorless for my travel images. My camera bag was now maybe half the weight it used to be, I had full functionality, and I’d turned into a hybrid photographer, shooting stills and video.” bobkrist.com and oldmaninmotion.com