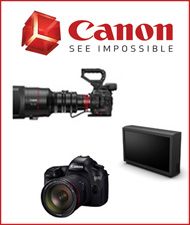 New York, NY—Canon USA, Inc., is holding its once-every-five-year Canon Expo 2015 New York, an imaging showcase that enables visitors to “see impossible” by providing a peek into Canon’s vision for the future.

The invitation-only event offers attendees the chance to experience the breadth of Canon’s imaging technology, as well as glimpse future products, solutions and services designed to transform the way customers live, work and share experiences. Featuring more than 100,000 square feet of exhibition space at the Jacob K. Javits Center in Manhattan, the event will have stops in Paris and Tokyo in 2015 and Shanghai in 2016.

In conjunction with the event, Canon USA announced that its parent company, Canon Inc., is developing a Cinema EOS system 8K camera and professional-use 8K reference display that will support the production of next-generation 8K video content. It is also developing a still-image, single-lens reflex camera with a 120-million-effective-pixel CMOS sensor.

Through the development of the Cinema EOS system 8K camera and professional 8K reference display, Canon aims to contribute to smooth cinema production workflows, facilitating not only the input and output of 8K video content but also 8K-to-4K down conversion and 4K cropping.

The Cinema EOS 8K camera in development will be equipped with a Canon Super 35mm-equivalent CMOS sensor that makes possible high-resolution, 8,192×4,320-pixel (approximately 35.39 million effective pixels) performance. This is even at a frame rate of 60 frames per second (fps) with 13 stops of dynamic range and a wide color gamut. The 8K camera also will feature a body size and design built for mobility and a high level of operability, along with an EF mount that offers compatibility with most of Canon’s interchangeable EF lens lineup.

Incorporating Canon image-processing technology, the 8K reference display under development aims to achieve high brightness, high contrast (high dynamic range) and a wide color gamut. And with a pixel density exceeding 300 pixels per inch, a level approaching the limit of human visibility, the display intends to make possible ultrarealistic imaging that can enable the reproduction of even subtle changes in light. Furthermore, when used in combination with the Cinema EOS system 8K camera, the display will be capable of conveying “truly impressive levels of visual expression.”

In addition, a new SLR camera being developed by Canon will feature a resolution of approximately 120 effective megapixels. It will incorporate a Canon high-pixel-density CMOS sensor within the current EOS camera platform, so it will be compatible with most of the company’s interchangeable EF lenses. The company noted that the high-resolution images that the camera is being designed to produce can recreate the 3D “texture, feel and presence of subjects, making them appear as if they are really before one’s eyes.”

APS-H-Size CMOS Sensor
In related news, Canon announced it has developed an APS-H-size (approx. 29.2×20.2mm) CMOS sensor with roughly 250 million pixels (19,580×12,600 pixels)—the world’s highest number of pixels for a CMOS sensor smaller than the size of a 35mm full-frame sensor.

When installed in one of Canon’s prototype cameras, the newly developed sensor was able to capture images enabling the distinguishing of lettering on the side of an airplane flying at a distance of approximately 11 miles from the shooting location, Canon reported.

The new Canon-developed CMOS sensor is said to achieve an ultrahigh signal readout speed of 1.25 billion pixels per sec—made possible through advancements in circuit miniaturization and signal-processing technology. The sensor enables the capture of ultrahigh-pixel-count video at a speed of up to five fps. Despite the high pixel count, Canon said it achieves “high-sensitivity, low-noise imaging performance through an architecture developed over many years and adapted for miniaturized pixels.”

Video footage captured by Canon’s prototype camera outfitted with the 250MP CMOS sensor achieved a level of resolution that was approximately 125 times that of Full HD (1,920×1,080 pixels) video and approximately 30 times that of 4K UHD (3,840×2,160 pixels) video. This high-definition output allows users to crop and magnify video images while maintaining image quality. usa.canon.com