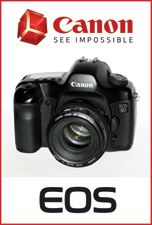 Melville, NY—Canon Inc. is celebrating the 10th anniversary of the introduction of its EOS 5D series of DSLR cameras. Launched in September 2005, the EOS 5D enabled advanced amateur photographers to take advantage of DSLR cameras equipped with a 35mm full-frame CMOS sensor that, at the time, were primarily targeted at professional photographers. The EOS 5D was offered at a competitive price, adding to the popularization of full-frame-sensor cameras.

In November 2008, Canon launched the second generation of the series: the EOS 5D Mark II. The first in the EOS series to include a function enabling the capture of Full HD video, the 5D Mark II caught the attention of the motion picture and video production industries by delivering the exceptional image quality and impressive background blur unique to DSLR cameras. The camera also encouraged creativity, being compatible with more than 64 Canon EF interchangeable lenses.

Then in March 2012, Canon introduced the EOS 5D Mark III, with dramatic improvements in still and video quality as well as enhanced autofocus precision and a faster maximum continuous shooting speed than its predecessors. usa.canon.com