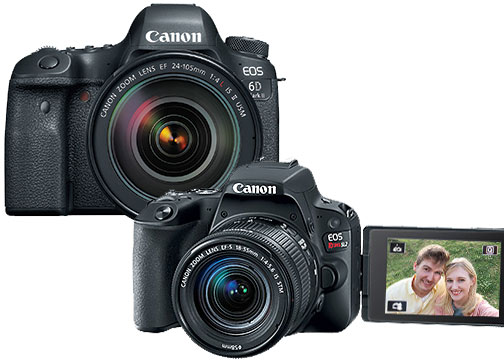 The EOS 6D Mark II is being marketed to photographers looking to take their creative skills to the next level by shooting with a full-frame CMOS sensor (35.9x24mm) DSLR. Canon says the 6D Mark II will “capture beautiful high-quality portraits and striking landscapes, even in low-light situations.”

In addition, the EOS Rebel SL2 is a small, lightweight camera with high-performance features for entry-level DSLR buyers.

“It seems fitting that today, a day set aside to commemorate the invention of a tool that forever changed how we view the world, we introduce two new DSLR cameras to the Canon family,” said Yuichi Ishizuka, president and COO, Canon USA.
In an industry where choices are abundant, providing consumers with the photographic tools that match their developing skill levels as they continue to embrace their passion for photography is a long-standing goal of Canon and stands at the core of our research and development.”

Designed with enthusiast photographers in mind, Canon’s predecessor EOS 6D historically served as the gateway for enthusiasts to step up to full-frame DSLRs. The EOS 6D Mark II camera features several enhancements over its predecessor.

The 6D Mark II employs a 26.2 megapixel, full-frame CMOS sensor that works with the advanced Digic 7 image processor. Together they produce an expanded ISO range of ISO 50–102,400, for challenging low-light situations as well as landscape, portrait and event photography. Still bursts of 6.5 frames per second and Full HD 60p video recording are also featured.

Another benefit is a vari-angle, touch-screen LCD for live view operation that also helps capture various angles. In addition for use composing and reviewing photos and movies, the 3-inch, 1.04-million-dot LCD monitor offers touch-sensitive controls. This permits photographers to select and adjust focus as well as menu and quick control settings with the touch of a finger. Two-finger touch gestures can be used for zooming or changing images. The monitor is constructed to help minimize reflections and is treated with a smudge-resistant coating.

This portable DSLR is targeted at photographers wanting to step up from a smartphone or point-and-shoot compact camera. With the introduction of this small, lightweight DSLR, Canon hopes to alleviate some of the concerns for first-time DSLR users.

Canon says the SL2 “features the world’s fastest AF speed at 0.03 second,” allowing for quick focusing on subjects in the frame. When designing the SL2, Canon took into consideration feedback from entry-level photographers who expressed interest in learning how to go beyond a camera’s program mode. The result was the creation of a user interface called “feature assistant.”

Users can see on the camera’s LCD monitor how switching modes on the mode dial or tweaking camera settings like aperture and exposure compensation alters the image they are about to capture. This function also guides photographers on capturing more compelling images, such as ones with a shallow depth of field. It also guides them on how to give moving subjects a frozen or flowing look.

The EOS Rebel SL2 DSLR boasts several other enhancements over its predecessor, the EOS Rebel SL1. These including: a 24.2MP APS-C-format CMOS sensor, a Digic 7 processor and a Dual Pixel CMOS AF system with phase detection. The camera offers a native ISO range of 100–25,000 that extends to 51,200. It is also capable of capturing five photos per second as well as Full HD 60p video recording. In addition, there is an external microphone input.

Its 3-inch, 1.04M-dot LCD provides 170º coverage, has anti-smudge and antireflective coatings as well as seven selectable brightness levels. Touch gestures can be used for zooming in or swiping through captured images. They can also be used to access menu and quick control settings. In addition, the touch-screen LCD lets users select selfie mode with a touch of a button.

The LCD is complemented by an eye-level, 95%-coverage optical viewfinder with a 9-point AF system. Other features include built-in Wi-Fi, NFC and Bluetooth technology for the transfer of captured content.