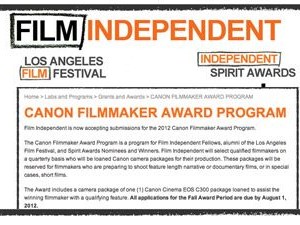 Winners of the Canon Filmmaker Award will be lent a Canon Cinema EOS C300 camera package to create their next feature-length narrative or documentary film, or in special cases, short films. Announced quarterly over the next year, the application process for the fall period is now open, and submissions will be accepted until August 1, 2012. All applications are to be submitted via the Film Independent website: filmindependent.org/labs-and-programs/grants-and-awards/canon-filmmaker-award-program.

“We are thrilled to be partnering with Canon, a company that shares our vision of supporting cinema as art, on this new Canon Filmmaker Award program,” said Josh Welsh, copresident, Film Independent. “So many of our fellows are already working with Canon’s existing equipment, so to be able to shoot their films with these new cameras will truly elevate their production experience and bring their films to life.”

Canon USA announced the program at the 2012 Los Angeles Film Festival, a preeminent cinematic event presented annually by Film Independent at L.A. Live in Downtown Los Angeles. From June 14-24, 2012, the festival will screen nearly 200 feature films, shorts and music videos, including Virgin airlines’ Departure Date, shot with the Cinema EOS C300 at 35,000 feet. A few of the other projects on the festival’s roster that were filmed with Canon imaging equipment include: A Band Called Death  About Face; Beauty Is Embarrassing; An Oversimplification of Her Beauty; Red Flag; Remote Area Medical; and Reportero.

As one of this year’s platinum sponsors, Canon partnered with Film Independent to bring a new slate of programming for filmmakers and festivalgoers. On June 16, Canon invited Los Angeles Film Festival attendees to explore its Cinema EOS products at the Filmmaker Lounge, including touch-and-try demonstrations of the Cinema EOS C300, EOS 5D Mark III and new 4K Cinema EOS C500 and EOS-1D C cameras. The experience culminated in the “Canon Celebrates Cinematographers” event, hosted by Shane Hurlbut, ASC, and Richard Crudo, ASC, where established and emerging industry professionals convened to honor the art of cinematography. Canon, along with cosponsor HBO, also hosted the annual Fellows and Industry Mixer at Katsuya at L.A. Live on June 17.

On June 23, 2012, Canon will screen when you find me—a short film produced by two-time Academy Award winner Ron Howard and directed by his daughter Bryce Dallas Howard, as part of Canon’s Project Imagin8ion. Following the screening, Canon will host a panel discussion with some of the key creative and technical minds behind the production, including Kevin Chinoy, producer, Freestyle Picture Company; Andre Lascaris, director of photography; and Evan Pesses, chief lighting technician. The event will close out with a screening of Dante Ariola and Jeff Cronenweth’s short Man and Beast, filmed with the 4K Cinema EOS C500. usa.canon.com