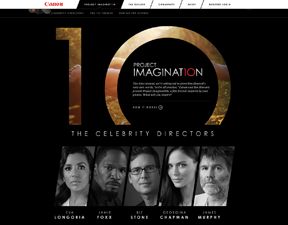 Canon believes that all people are creative; it’s just a matter of what spark we need to bring out our creativity.

This belief that everyone is inherently creative is the spark that launched Project Imaginat10n—a photography-inspired film festival that aligns award-winning director Ron Howard and five celebrities from diverse disciplines to direct short films based on the creativity of others.

“With Project Imaginat10n, we wanted to be relevant to our end users by understanding their different passion points,” said Michelle Fernandez, director of Marketing for Canon USA’s ITCG Camera & Video division. “Canon is here to provide the cameras and lenses, but it’s how each person defines their own creativity that is important.”

In 2011, director Ron Howard and Canon USA invited photographers of all levels to submit their most imaginative photographs based on eight elements of storytelling, and nearly 100,000 images were uploaded to their website. Eight of the photographs were selected and inspired an award-winning short film, when you find me, which was directed by Bryce Dallas Howard.

For 2012, the newly named Project Imaginat10n once again invited photographers to express their creativity by submitting photographs in 10 storytelling themes on imagination.usa.canon.com: Mood, Time, Goal, Obstacle, Relationship, Backstory, the Unknown, Setting, Character and Discovery. And they’ve invited five well-known personalities to direct films that are inspired by these photographs.

Each of these directors chose photographs from each of the 10 themes, and the compilation will be used to inspire a film they will direct. In addition, Ron Howard will choose one image that will be used in all of the five films.

“When you see the images chosen by each of these celebrities, it’s an awesome exercise in creativity,” said Fernandez. “To think that a working mom in Montana, a college student in California or a businessman in New York can submit images that will inspire a professionally directed film has really captured the imagination of photographers across the country.”

With input from the online community, Canon and Ron Howard, the entries have been narrowed down to 91 winners, and the five celebrity directors have chosen 10 photos, one per theme, to inspire their films. The films will then be showcased at a special Canon Project Imaginat10n Film Festival sometime in 2013.

“From the response we’ve seen on the website to the images that were submitted across all of the categories, we’re amazed at the excitement that this project has generated,” said Fernandez. “And with Ron Howard’s input and the creativity of our five influential directors we’ve chosen, we’re looking forward to some amazing, inspirational films.” usa.canon.com