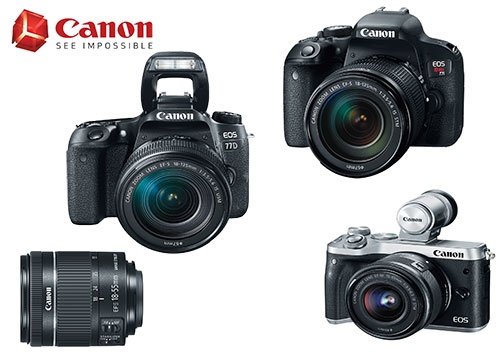 “In what marks the 30th year since the introduction of the Canon EOS system, the announcement today of these two new DSLR cameras exhibits Canon’s commitment to providing our customers with the tools they need to grow their passion for capturing the best possible pictures of the moments in time that mean the most to them, or inspire them to one day shoot professionally,” said Yuichi Ishizuka, president and COO, Canon USA, Inc.

This is the first EOS Rebel with a 45-point, all-cross-type AF system within the optical viewfinder. It is also the first in the series with Dual Pixel CMOS AF with phase detection as well as the first with a Digic 7 processor. It also includes creative filters for both still images and video to permit users to customize the look of their content.

When designing the Rebel T7i, Canon took into consideration feedback from entry-level photographers who expressed interest in learning to go beyond a DSLR’s program mode. As a result, users will now be able to see on-screen how switching modes on the mode dial or tweaking settings can alter the image. This will also guide photographers on how to use a shallower depth of field and how to give moving-subjects a frozen or flowing look.

Canon announced that the EOS 77D represents a new category of advanced amateur EOS cameras, a step above the Rebel series. Users will benefit from features like the 7,650-pixel RGB+IR metering sensor similar to the one found in the EOS 80D camera. In addition, an anti-flicker shooting mode will help combat the on-and-off repetitive flickering from artificial lights found in high-school gyms or auditoriums.

The 77D also features a top LCD panel and a quick control dial for photographers wanting quicker, easier access to changing and controlling settings on the camera.

The Canon BR-E1 will be compatible with both the EOS Rebel T7i and 77D cameras.

It is also scheduled for April availability and will retail for $50.

The compact M6 provides five DSLR-like dials for control and customization. It also works with the entire lineup of Canon EF, EF-S and EF-M interchangeable lenses. Specs state the camera offers high-speed continuous shooting at up to 7 fps; 9 fps with AF lock. It has a native ISO range of 100–25,600. In addition to high-res images, the M6 captures Full HD video at 60 fps.

Other M6 features include built-in Wi-Fi, NFC and Bluetooth connectivity, as well as a combination IS system. It employs in-camera five-axis digital image stabilization to help reduce camera shake even when recording video. When shooting with a compatible lens with IS, the M6 will leverage both the optical IS in the lens as well as the in-camera digital IS through a combination IS system.

Additionally, the camera’s 3-inch, touch-screen LCD tilts approximately 180º up and 45º down. This is to enable easy use when surfing menus, composing images, viewing images and videos or taking selfies.

“The new Canon EOS M6 camera and optional EVF-DC2 are ideal for expert and advanced amateur photographers looking for an easy, take-anywhere camera as well as a great choice for passionate image creators wanting to step-up to produce high-quality images and videos that are easily shareable,” added Yuichi Ishizuka. “It is with great passion that Canon continues to deliver variety to image makers across all skill levels.”

Debuting with the M6 is the EVF-DC2 optional external electronic viewfinder, boasting approximately 2.36 million dots. The new EVF is both smaller and lighter than the previous model.

The cylindrical style EVF has a dioptic adjustment ring on the outside. It attaches to the camera’s accessory shoe and is available in black and silver.

A firmware update is necessary to use the EVF-DC2 on models other than the EOS M6. It will retail for $199.99.

Also announced was the CS100 firmware update for the Canon Connect Station CS100 and a mobile app. The Rebel T7i and 77D DSLRs as well as the mirrorless M6 will all be compatible with the CS100. The hub gives consumers a way to quickly and easily store, manage, view and share photos and videos wirelessly.

The CS100 firmware update makes the hub compatible with select Canon and non-Canon cameras. It also works with a wider range of supported file formats. It also adds support for video playback of computer-edited movies as well as improves smartphone connectivity and compatibility. usa.canon.com 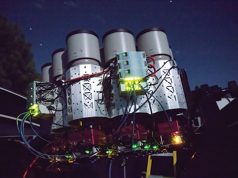