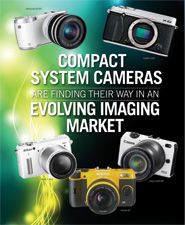 With the point-and-shoot camera market continuing to struggle for share against the surging tide of the constantly improving image capture tech in smartphones, all of the major digital camera manufacturers continue to invest in higher end capture tech, particularly within the compact system camera (CSC) market.

Many industry analysts are predicting point-and-shoot camera sales will have dropped some 30% by the end of 2013. Thus, is it any wonder that we’re seeing a major shift from imaging companies to roll out new product and new innovation in the CSC space? In fact, Olympus isn’t even pursing the DSLR space anymore, instead offering its OM-D and PEN lines, while Canon just announced its second entry in the category, the EOS M2. Panasonic is marketing its Lumix CSCs, like the DMC-GX7, as Hybrid Photography tools, and Fujifilm continues to bolster its premium X-series CSCs with impressive models like the X-E2.

“The smartphone category is simply going to continue to shave off profit margins at the low end of the digital camera market,” predicted Rob Carlson, a former tech analyst at Ipsos. “Consumers need compelling reasons now to carry around a second device to take pictures.”

With all of the major players now offering product in the CSC category, they apparently all feel they’ve discovered that compelling reason. Suffice it to say, 2014 should be an interesting year for the digital camera market, and consumers appear to be catching on—it’s just happening a bit more quickly across the Pacific.

The mirrorless segment is gaining huge ground in Japan, where it makes up about 10% of the camera market, according to the Camera & Imaging Products Association.

The numbers aren’t quite as robust here in the U.S., but with every major camera manufacturer now offering product in this category, the tide is expected to turn considerably in 2014.

“In the U.S. at least, [DSLRs are] still what consumers know and what they understand,” explained Darrin Pepple, senior marketing planning manager for Panasonic, in a recent interview. “We’re continuing to innovate in the way of lenses, size, form factors, trying to find the magic bullet.”

Selling Strategy
One of the aspects that may be slowing the category’s growth out of the chute is the confusion that’s been created over what level of photographer CSCs are best suited for.

“They need to be sold as a serious camera, not so much something that is thought of as a middle ground between DSLRs and point and shoots,” said Adrienne Martel, who classifies herself as an advanced amateur who has turned her shooting skills into a profitable side venture. “When I purchased the Sony NEX-7, the sales pitch I was given was that this was a step up from a point-and-shoot camera that offered a better shooting option than a compact point and shoot without the bulk inherent in a DSLR. Simply stated, that is selling this category short.”

Martel added that she was initially concerned that the price tags alone in the CSC category made her feel these cameras better deliver “way more than a point and shoot.”

Communicating to the consumer who is looking to go beyond the capabilities their smartphone is offering is important, and a big part of that is introducing the creative possibilities that being able to change lenses introduces. While this is no different than what the philosophy of selling a DSLR has been, the idea that these possibilities are now available in much less intimidating body designs that are easier to handle and operate is the new hook.

“I just think there’s a different mindset involved when consumers shoot with a CSC. The cameras are just so much more inconspicuous than a DSLR. The shooter just feels more comfortable and even the people you may be shooting react to it accordingly,” Martel added.

It’s All about the Tech
Educating buyers on the larger image sensors (when compared to compact cameras) in many models that help to do things such as improve noise levels at high sensitivities and boost dynamic range is important as well. Many consumers are more open today to the details in the tech they’re buying, so hearing why they’ll be taking better pictures is an important discussion.

Full-frame sensors are now part of this category, too, so the gap between the image quality of CSCs and DSLRs has been greatly closed. More on that in a minute.

“At the end of the day, it’s about taking better pictures and you couldn’t make that argument anymore in the smartphone versus point-and-shoot camera comparison,” Rob Carlson said. “You can easily make that argument when discussing a CSC, and it’s important that retailers do.”

Nikon, a company that refers to the category as the Advanced Cameras with Interchangeable-Lens system (ACIL), is taking the category in yet another direction with the first waterproof, shockproof, freezeproof model—the Nikon 1 AW1.

“All the Nikon 1 series cameras are exciting to consumers because of their excellent balance of design, portability and spectacular image quality. The new Nikon 1 AW1 is an ideal camera to keep pace with consumer’s active family lifestyles,” explained Masahiro Horie, director of Marketing and Planning for Nikon.

Samsung has had some big-time success in the CSC category, with the NX300 leading that charge, and the company has their own take on where the category is going.

“Customers are asking for better camera performance, easier connectivity, better integration with their other electronics. They want the cameras to be as understandable as the other devices they use daily,” explained Jay Kelbley, Samsung’s senior marketing manager, Digital Imaging. “As consumers demand more digital imaging products for their mobile lifestyles, we are well positioned for continued growth thanks to products like the Galaxy NX, NX300 and NX2000. Samsung is committed to delivering a cohesive experience across all devices. This is a driving factor for our camera innovation.”

Full-Frame Game
Now that Sony has introduced the first full-frame mirrorless camera with the recent announcement of the A7, the CSC category is taking dead aim at DSLRs, with an image sensor that is the same size as the ones found in the industry’s top-of-the-line DSLR cameras.

“This is worth keeping an eye on at the higher end, even beyond the full-frame tech,” Jim Cummins, a New York-based pro photographer, observed. “They are coming in at a slightly cheaper price than comparative DSLRs. The lower end CSCs haven’t really been cheaper than the DSLRs on that level. This could make a lot of noise at the higher end of the category, and you wonder what the future is for DSLRs.”

Ultimately what the CSC category has done is bring new and markedly improved choices to shooters of all levels—from the serious enthusiast looking for a small, highly capable camera to point-and-shooters looking to lift their photography to the next level but hoping to find a solution that offers DSLR-like image quality in a smaller, easier-to-use package.