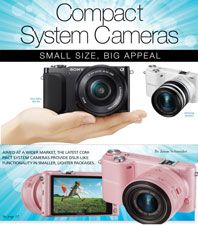 Compact system cameras (CSCs) with interchangeable lenses are the hot ticket, appealing to a wide variety of consumers. Some industry mavens have even predicted that CSCs will eventually supplant digital SLRs, which are inherently larger, heavier and more complex.

Since the DSLR has clearly been the target for CSC designers, many of their key developments have been aimed at providing a DSLR shooting experience. Relatively low-res LCDs have given way to higher res LCDs that display a wider color gamut for a more vibrant, detailed view when composing or evaluating images. This trend has culminated in the OLED monitors and electronic viewfinders now appearing in more CSC models. Indeed, high-resolution OLED EVFs with fast refresh rates, like the 2.4-million-dot (XGA resolution) OLED EVFs in the Sony NEX-6 and NEX-7, provide a brilliant high-magnification viewing image that rivals that of optical viewfinders (OVFs). And because of their elevated refresh rates, they virtually eliminate “smearing” when viewing fast-moving subjects, the bane of older EVFs.

Articulated monitors that swing and tilt for high- and low-angle viewing have also migrated from middle and upper tier DSLRs to many of their CSC counterparts, enhancing their creative flexibility. Many of the latest models also offer touch screens for faster, more intuitive operation.

Megapixel Madness, and More
Since many of today’s DSLRs have image sensors in the 18–36 megapixel resolution range, CSCs could hardly afford to lag behind, and they haven’t. The MP rating of most current Micro Four Thirds and APS-C-format models fall into the 12–24.3MP range. And these large-sensor models therefore yield image quality, color differentiation and detail equal to comparable APS-C-format DSLRs, if not quite matching the performance of full-frame models. Like their archrivals, they also provide RAW and/or JPEG files, excellent high-ISO performance, Full HD 1080p video capture, and a selection of sophisticated autofocus and metering options. However, until about 2011 their responsiveness and shutter lag times didn’t quite measure up to the DSLR standard. The answer: new technology.

The Move to On-Sensor Phase-Detection AF
Until the advent of the Nikon 1 J1, mirrorless compact system cameras relied entirely on contrast-based AF (CAF), which, like focusing on a ground-glass screen, is commendably accurate but inherently slower and less decisive than phase-detection AF; PDAF is a true electronic rangefinder system that identifies the subject and “knows” which way to turn the lens to achieve the optimum focus point. True DSLRs, and Sony Alpha SLTs, have mirrors that direct some of the incoming light beam up to their PDAF sensors. Mirrorless CSCs, however, had to await the development of hybrid AF, which combines sensor-based CAF and PDAF elements built right into the sensor.

The advantages of hybrid CAF/PDAF systems include not only faster, more decisive autofocusing but also the ability to provide continuous AF and focus tracking before and during the exposure, which is crucial when shooting at high burst rates or capturing HD video. While today’s best CAF systems have been tweaked to provide much improved performance, none can quite equal hybrid AF or PDAF when it comes to seamless, decisive AF that completely eliminates the “hunting” that is occasionally seen (and heard) in videos shot with CAF cameras, including CSCs.

Hybrid AF systems that include on-sensor PDAF are an emerging technology currently found in CSCs, including the Canon EOS M, all Nikon 1-series models, the Sony NEX-6, NEX-7 and NEX-5R, and the Samsung NX300. It definitely enhances the AF performance of these cameras, making them more competitive with DSLRs. Nevertheless, hybrid AF and PDAF on-sensor are emerging technologies that must be further developed to reach their full transformational potential in tomorrow’s cameras.

The Evolving CSC Market
At their best, CSCs combine the advantages of DSLRs and point-and-shoot models, providing lens interchangeability, high image quality and many features of DSLRs in handier form factors. They have fewer moving parts, and shutter-release noise and vibration are less thanks to no moving mirror. They also have a shorter flange back distance that’s especially beneficial when designing high-performance wide-angle lenses.

From a marketing perspective, CSCs like the Canon EOS M and the Sony NEX line have an edge in offering adapters that allow users to mount their existing DSLR lenses on their CSCs. The Sony LA-EA2 adapter ($270) even has a built-in translucent mirror and PDAF sensor that adds phase-detection AF capability to NEX models lacking this feature. And dealers should definitely take notice of high-margin CSC lenses and accessories.

While the CSC market continues to be technologically driven, with many of the latest high-end models offering higher res sensors, enhanced image-processing software for greater responsiveness, faster burst rates and enhanced viewing options, such as high-res tilt/swing and touch-screen LCDs, and OLED EVFs, something fascinating is going on in the entry-level and middle-tier CSC sector.

Manufacturers are now mixing and matching features to come up with enticing models that appeal to a broadening spectrum of users. The latest middle-tier CSCs offer features that have migrated down from higher end models, and high-performance, broad-spectrum, price-point models with simplified user interfaces at very competitive prices are appearing in increasing numbers. It’s like a rerun of the evolution of the DSLR, except that this time it has the potential of appealing to an even wider user base. To give you a better idea of what’s going on in CSC-land, here’s a sampling of some of the latest models.

Sony Alpha NEX-3N. Claimed to be the smallest (4.4×2.5×1.4 inches, body only), lightest (just under 7.5 ounces) interchangeable-lens camera with an APS-C sensor, it’s a fine choice for travelers. It has a 16.1MP CMOS sensor, and it comes as a kit with a fast Sony 16–50mm f/3.5–5.6 PZ (24–75mm equivalent) power zoom lens controlled by a new zoom lever atop the body that also accesses the digital zoom function. The 3N can capture Full HD 1080p video at an impressive 60i/24p and provides ISO settings to 16,000 for extended low-light capability. Object framing lets users create “professionally framed” versions of their images, and its 3.0-inch LCD flips 180º for convenient self-portraits. $449.99 with 16–50mm f/2.8 zoom lens. sony.com

Nikon 1 J3. An upgraded version of Nikon’s CX-format CSC with a 2.7x crop factor, its CMOS sensor has been upgraded to 14.2MP, and it now has an Expeed 3A image processor that delivers 15-fps continuous bursts with AF, and up to 60 fps with focus locked, as well as simultaneous Full HD 1080p video and stills at 60/30 fps, and 1,200-fps slo-mo at lower resolution. Despite its ultracompact size (4.0×2.4×1.1 inches, body only), the J3 provides: a 3.0-inch, 921k-dot LCD; RAW + JPEG capture; ISO 160–6400; and, as before, a hybrid AF system with contrast AF and phase-detection AF on-sensor. An improved user interface provides simpler navigation using the mode dial and function button, and the J3 works with the optional WU-1b wireless mobile adapter to instantly transfer photos, videos and motion snapshots to a smartphone/tablet. $599.95 with 1030mm VR zoom lens (2781mm equivalent). $599.95. nikonusa.com