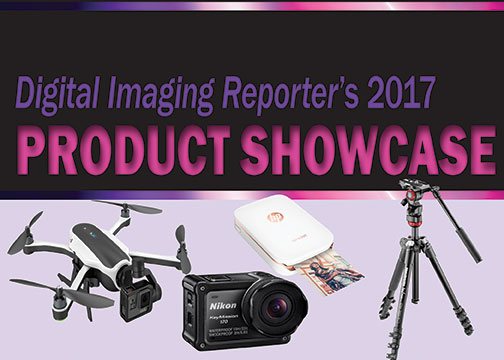 A signature feature of Digital Imaging Reporter’s convention and show coverage of the digital imaging sector, the 2017 Product Showcase highlights a selection of the most recently announced and notable imaging products at CES 2017.

Sigma’s 85mm f/1.4 DG HSM Art lens supports high-res sensors, with an optical system built by Sigma R&D to produce attractive bokeh. Its architecture features two special low dispersion glass elements as well as one glass element with a high rate of anomalous partial dispersion and refraction. Full-time manual focus override was added, which can be controlled when the focus ring is rotated. $1,199.

Sigma 12–24mm f/4 DG HSM Art. This lens features “the largest aspherical glass mold in the industry, offering photographers an ultrawide-angle zoom with virtually no distortion, flare or ghosting,” notes Sigma. It has a constant f/4 brightness and FLD glass claimed to be equivalent to calcium fluorite in performance. In addition, its optimized power distribution is said to result in image quality from center to edges. A 9.4″ minimum focus distance allows close-ups with expansive backgrounds. $1,599.

Additionally, both feature a reengineered AF system with 1.3x the torque of its predecessor. They support Canon, Nikon (with electromagnetic diaphragm) and Sigma mounts. LVCC, Central Hall, Booth 15544. sigmaphoto.com

The Kodak Ektra smartphone is a photography-led device designed for photo enthusiasts. Initially launching in Europe, it fuses Kodak’s history in imaging with the latest innovations in smartphone photography. At the heart of the Android 6.0 Marshmallow smartphone is a 21MP, fast-focus sensor with an f/2.0 lens and dual LED flash. Its 13MP front-facing camera uses phase-detection AF and f/2.2 aperture.

The GX85 has the look and feel of a classic rangefinder 35, but it’s an advanced Micro Four Thirds mirrorless camera that features a 16MP Live MOS sensor and Venus engine. The sensor omits the low-pass filter to boost fine detail resolving power by 10%. It captures 4K UHD video at 30/24 fps and provides a 10-fps, full-res burst rate with single-shot AF and 6 fps with continuous AF.

It has sensitivity settings to ISO 25,600 and excellent responsiveness as a result of its Depth from Defocus AF technology. Its 3″, 1,040K-dot, tilting touch LCD is complemented by a 2,764K-dot EVF. Other features: dual IS that leverages the built-in 5-axis image stabilization system and the IS capabilities in OS Lumix lenses; Wi-Fi/NFC; silent shutter mode; and also auto HDR. Its 4K photo function extracts 8MP stills from 4K video. With a 12–32mm f/3.5–5.6 stepping motor lens, $799.99. Tech East, LVCC, Central Hall, Booth 12908; South Hall 1, Booth 20966. panasonic.com

Controlled by an iOS/Android app, its eight cameras simultaneously capture images and videos, while four built-in mics record audio to facilitate spatial audio and stereoscopic 3D, 360º content. Each camera uses lenses with a 120º horizontal field of view and 180º vertical to generate 4K, 360° VR content. And it’s engineered to reduce the effects of flare and distortion associated with ultrawide fisheye lenses. One hour of video capture can be extended with a power bank and higher capacity SD card. With software, a VR headset, a selfie stick/tripod, a case and a handle, $799. LVCC, South Hall 2, Booth 26408. vuze.camera

The Befree Live is the smallest, most compact video tripod kit in the Manfrotto range. For indoor or outdoor use, it is designed for the emerging mirrorless and DSLR camera content-creator communities, including vloggers and mobile journalists.

The foldable video tripod has all the characteristics of the Befree line. It boasts the Befree Live fluid video head that provides fluidity on pan & tilt along with precise leveling. The pan bar on the compact head is removable and foldable. Manfrotto claims the Befree Live fluid video head is the smallest on the market. Additionally it is compatible with the existing Befree family, 290 Light and all 40mm diameter tripods.

The Befree Live tripod is engineered to support a payload of 8.8 pounds, yet it weighs 3.9 pounds. It extends to 59.4 inches and folds down to 16.5 inches. It features a sliding plate for use with camcorders and has larger feet and a hook for stability. $239.99. Renaissance Hospitality Suites. manfrotto.us

HP’s new pocket-size photo printer instantly prints 2×3″ sticky-back photos from smartphones. The HP Sprocket app, free on iOS and Android, is designed to allow users to easily customize favorite smartphone and social media photos with color frames, text, stickers and filters. The smudge-proof, water-resistant, glossy photos can be shared, or users can peel off the backing and the photos become stickers to decorate bags, scrapbooks, journals and walls.

With Bluetooth connectivity, the portable printer is small enough to go virtually anywhere. It’s ZINK (Zero Ink) technology means no ink or toner cartridges are needed. The HP Sprocket is available in white with rose gold accents or black with silver accents. The printer comes with a 10-pack of HP ZINK photo paper for $129.99. Packs of HP ZINK photo paper (20 sheets per pack) are $9.99 each. LVCC, North Hall, Booth 8929. hp.com

The mirrorless, interchangeable-lens EOS M5 features a 24.2MP, APS-C-size CMOS sensor, a Digic 7 processor and the fastest AF speed in the EOS M series. It’s also the first in the EOS camera line to include the low-energy Bluetooth Smart function that can maintain a constant connection with a smartphone/tablet via the Canon camera connect app.

The M5 boasts a 2,360K-dot EVF and Canon’s Dual Pixel CMOS AF for capturing stills and video with “smooth and precise autofocus.” This allows for touch and drag AF, so users can switch the subject of their focus by dragging the AF frame on the 3.2″, tilting/touch LCD, even while looking through the EVF. And focus peaking lets them highlight the area of the image that is in focus from within the EVF or LCD.

olloclip’s mobile photography lenses for iPhone 7 and 7 Plus feature multielement, coated optics, the Connect interchangeable-lens system to attach multiple Connect lenses, and a hinged base that keeps the lens flush with the camera for improved optical performance.

The Core lens set ($99.99) includes a fisheye lens for a near-180º spherical effect; a superwide 4-element lens with more than a 120º field of view; and a macro 15x lens to transform iPhone into a digital microscope. The Active set ($119.99) is aimed at shooting farther and wider with iPhone’s native camera. Its telephoto 2x optical zoom lens brings shooters closer to the action and captures portraits with shallow depth of field; an ultrawide lens has a 155º field of view. The Macro Pro set ($79.99), with 7x, 14x and 21x lenses, turns iPhone into a digital microscope or loupe. Six-element optics get extra close to capture macro shots with greater depth of field and less pincushion distortion. LVCC, North Hall, Booth 8929. olloclip.com

The fourth-generation, midrange Ricoh Theta SC records fully spherical 360º images that show the entirety of a scene. Lighter than its predecessors, it sports a sleek design reminiscent of a TV remote. It can also be handheld with one-button operation or placed on a flat surface or tripod to be remotely controlled by a smartphone via the updated Theta S app.

The GoPro Karma features a compact, fits-in-a-small-backpack design. The drone comes with an image-stabilization grip that can be handheld or mounted. Foldable, the entire Karma system fits into its included backpack.

The drone can be controlled by a game-style controller with an integrated touch display, eliminating the need to use a smartphone as its viewfinder. Also, its 3-axis camera stabilizer can be removed and attached to the included Karma grip for capturing handheld and gear-mounted footage. A companion GoPro Passenger app enables friends to view the pilot’s flight. Furthermore, the Karma is compatible with the Hero5 Black, Hero5 Session and Hero4 Black and Silver editions. Karma alone, $799.99; Karma with Hero5 Black, $1,099.99. LVCC, Central Hall, Booth 14141. gopro.com

Pyle’s SLDV4KBL 4K Ultra HD action camera is marketing as “the perfect companion for action sport enthusiasts looking to relive every hairpin turn or monster jump, while sharing their HD photos and videos.” It incorporates a 16MP Sony CMOS sensor and records at speeds as high as 120 fps for slow motion video.

Also provided is 4x zoom, controlled via a 2″, invertible, touch LCD. The camera can also be operated by a bundled Wi-Fi remote, or shooters can use a smartphone and the XDV app to wirelessly snap pictures and record video. Other features: an f/2 lens with a 160º viewing angle; one-button video recording/image capture; video resolutions of 4K UHD, 2.7K, 1080p and 720p; time-lapse mode; loop recording; still photo modes with delay timer and burst shooting; and a microSD slot. The SLDV4KBL comes with mounts, clips and a waterproof case. $79.99. LVCC, Central Hall, Booth 14840. pyleusa.com

The PEN E-PL8 has metal dials as well as metal and leather-grained finishes. It features a TruePic VII processor, a 16MP Live MOS sensor and in-body IS. Its 180º flip-touch LCD aids in selfie shooting (still and video). The camera automatically switches to selfie mode when the monitor is flipped downward to its front-facing position. The monitor then turns into a mirror display, and the camera focuses and shoots with a touch of the monitor. In e-portrait mode, it automatically smooths skin tones, and users can apply art filters.

In addition to the e-portrait, shutter release, self-timer and brightness adjustment buttons, video clips as well as movie recording buttons were added to the touch display. There’s also a video selfie mode that displays the movie effect and movie recording, brightness adjustment and video clips buttons. When an electronic zoom lens is attached, it automatically switches to a wide-angle setting for quick selfie shooting. Other features: Wi-Fi; a live guide; and 8.5-fps shooting. $549.99 body only. LVCC, Central Hall, Booth 15544. olympusamerica.com

The AF system has 425 phase-detection points positioned over the image area and also includes contrast-detection AF. Plus, 5-axis optical IS provides a 5-step shutter speed advantage. Using touch-screen AF, shooters can lock focus by touching a subject on the screen. Furthermore, when using the viewfinder for framing/shooting, the LCD can be used as a touch pad.