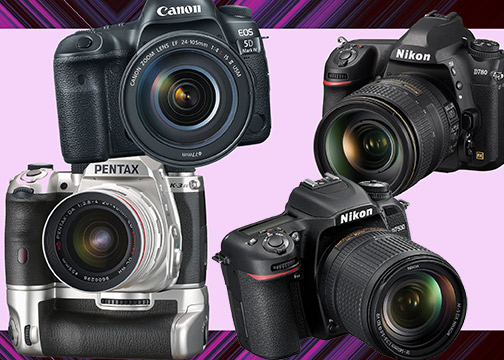 Great advances in electronic viewfinders and hybrid on-sensor AF systems have tilted the playing field in favor of mirrorless cameras. Indeed, some industry mavens have predicted traditional digital SLRs with optical viewfinders and flipping reflex mirrors are an endangered species.

In the long term, they may be right; however, for now enthusiast DSLRs offer a viable alternative to their mirrorless interchangeable-lens counterparts in terms of overall real-world picture-taking performance.

The DSLR’s optical viewfinder (OVF) provides a more viscerally “real” view of the world that some shooters prefer to the enhanced real-time view in an electronic viewfinder (EVF), however brilliant it may be. Moreover, most DSLRs have ergonomic form factors and traditional control placement that are more important to some than any size or weight penalty or maximum burst rates of “only” 7–12 frames per second (fps).

Technically, a classic DSLR is a “through-the-lens-viewing” camera. An angled mirror behind the lens reflects the image formed by the lens up into an OVF for viewing. It then moves out of the light path at the instant of exposure, so the light can reach the sensor.

Therefore, strictly speaking, no camera that uses an EVF instead of an optical viewfinder is really an SLR or a DSLR, even if it provides “DSLR functionality.”

What’s more, classic DSLRs are available in price ranges from entry level to top pro. However, those listed here fall into the enthusiast class, retailing from just under $1,000 to just under $3,000, because that’s where most of the recent innovations and exciting models have appeared.

When customers step up to your counter asking about an interchangeable-lens camera (ILC), make sure to show them a few DSLRs along with mirrorless models. Heck, you can even demonstrate the virtues of a DSLR without having to turn it on!

The DSLR also boasts full-res, continuous 7-frames-per-second bursts and shutter speeds of 1/8,000. What’s more, when the electronic shutter is operated in live view, it shoots at 12 fps without shutter noise.

When using its OVF, Nikon’s 51-point AF system pairs with an enhanced algorithm from the D5, while 15 cross-type AF sensors maximize accuracy. And for the first time, a Nikon DSLR uses the same 273-point focal plane hybrid AF system employed in the mirrorless Z 6; it boasts 90% frame coverage and fast, smooth, accurate AF in live view and when recording video.

This significantly upgraded compact, full-frame Canon model appeals to advanced enthusiasts; that’s because it delivers “the 5D experience” at an attractive price. It has a 26.2MP full-frame CMOS image sensor coupled to a high-performance Digic 7 image processor. As a result, it achieves an impressive 6.5-fps maximum burst rate. It also provides sensitivity settings that are expandable from ISO 50 to ISO 102,400.

Pentax’s flagship full-frame, K-mount DSLR incorporates a new 14-bit image processor with a Ricoh Imaging-developed accelerator unit; it reduces noise, enhances clarity and color accuracy as well as boosts the sensitivity range to an impressive ISO 819,200. Moreover, a built-in 5-axis shake reduction system minimizes the effects of camera shake and enables Pixel Shift Resolution II tech; it factors in the movement of the sensor to record sequential frames and merge them into a single image with greater color detail and higher resolution.

In addition, the camera incorporates an ultrahigh-res 36.4MP CMOS sensor and a Prime IV processor; it also employs an AA filter simulator that minimizes moiré patterns but omits the standard antialiasing filter to ensure sharper images. The DSLR achieves a full-res burst rate of 4.4 fps. Furthermore, its wide-pattern SAFOX 12 AF sensor covers nearly the entire full-frame area and has 33 AF points; they include 25 cross pattern and three f/2.8-luminance points that operate in light down to -3 EV.

What’s more, its unique 3.2-inch LCD monitor can tilt upward 90º, down 44º and laterally 35º. Other features comprise dual SD card slots; Full HD 1080p video capability at 30p or 60i; GPS with an astrotracer function that minimizes star trails during long exposures; and LED-illuminated body points on the lens mount, card slots and LCD. All this tech is integrated into a sturdy, weather-sealed body with a stainless-steel chassis and magnesium alloy outer shell that can operate in temperatures down to 14ºF. $1,799.95.

Offering excellent imaging performance in a sleek, compact, ergonomically contoured package, this popular, enthusiast-aimed DSLR incorporates many key features of higher-end Nikons. These features include a 20.9MP DX-format (APS-C) CMOS sensor that omits the optical low-pass filter to enhance resolution. It also employs an advanced Expeed 5 processing engine. The result is a maximum full-resolution burst rate up to 8 fps with full AE and AF. In addition, it provides a native sensitivity range of ISO 100–51,200 that’s expandable to ISO 1,640,000!

The DSLR’s heightened multimedia capabilities also include 4K UHD (3,840×2160) video recording at 30 fps along with the ability to produce 4K UHD time-lapse movies in-camera. Moreover, its impressive still and video performance are both enhanced with a 51-point, 15 cross-field-sensor AF system that delivers outstanding AF speed and accuracy.

Furthermore, the camera provides an anti-flicker function that automatically compensates for fluorescent light sources. The sensor/processor combo also achieves a full-res burst rate of 10 fps with no time lag during OVF shooting or 11 fps during live view capture.

What’s more, the camera allows users to record uncropped 4K UHD video at 30 fps as well as Full HD 120p video capture. Add to that a sensitivity range of ISO 100–25,600 that’s expandable to ISO 51,200. Further, its 3-inch, 1.04M-dot vari-angle touch-screen LCD monitor permits photographers to use touch gestures for zooming in or swiping through images after they’re taken.

In addition, the high-performance 90D features a 100% view solid glass pentaprism; an electronic shutter function with speeds that top out at 1/16,000 sec; an upgraded 22,000-pixel AE metering sensor that enhances AE, AF and color-tracking performance; EOS iTR AF for superior face detection; and built-in Wi-Fi as well as Bluetooth connectivity. $1,199.

The third generation of the popular K-3 takes this classic APS-C-format Pentax DSLR to a significantly higher performance level. It boasts an upgraded 25.7MP BSI CMOS sensor coupled to an advanced Prime V image processor. Moreover, its AA (antialiasing)-filter-free design reduces moiré patterns to the same level as an optical AA filter. The simulator has on/off and level selections. Another upgrade is the SAFOX 13 phase-detection AF system that focuses down to -4 EV. It provides 101 AF points, including 25 cross-type points.

Consequently, the K-3 Mark III delivers full-res bursts at up to 12 fps; 4K UHD 30p video capture; and sensitivity settings from ISO 100 to an impressive ISO 1,600,000. The camera also features a 5-axis SRII in-body image stabilization system that achieves a 5.5-stop advantage in minimizing the effects of camera shake.

This Nikon digital SLR was the first of the breed to combine an FX-format, full-frame 45.7MP BSI CMOS sensor sans an optical low-pass filter with a cutting-edge Expeed 5 image processor. Subsequently, the D850 has become the mainstay of sophisticated enthusiasts and pros. It delivers a full-res burst rate of 7 fps that can capture up to 51 compressed, lossless 14-bit RAW files with full AE and AF. It also has sensitivity settings extendable to ISO 102,400.

Its multimedia capabilities include 4K UHD video recording at 30, 25 and 24 fps in full-frame or DX crop-sensor framing. It also boasts a Multi-CAM 20K 153-point AF system with a choice of 24-, 72- and 153-point dynamic-area AF zones, as well as fine-focus-tuning capability.

*All MSRPs are body only.