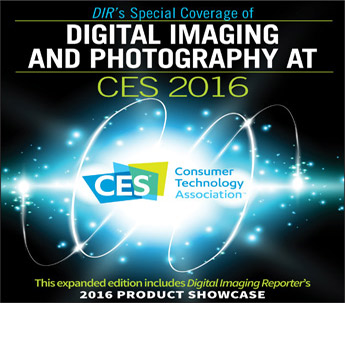 Situated in a vacationer’s paradise, Cathy Church’s Photo Centre is a lot more than just another photo specialty retailer. Rafael’s wife, a renowned underwater photographer, has attracted an upscale clientele committed to honing their underwater shooting skills. She teaches classes in underwater photography, has an impressive gallery displaying her outstanding images and also runs a studio that specializes in covering weddings and events.

“We’re looking at a lot of things here at CES—really anything having to do with cameras and imaging,” says Rafael, “and we’ve already found a few fascinating items right here at the Tiffen booth, which is our first stop. Polarizing filters and graduated ND filters are very big in our neck of the woods, and we’ve found a few outstanding ones for our DSLR shooters.

“We’ve also been looking to expand our range of tripods, since we offer everything from $30 cheapies to mid- and large-size pro models, and the same is true for studio lighting equipment and camera bags. We always do a good job with Steadicam, and we’ve been checking out the new Smoothees, the new universal cradle that works with practically any cell phone camera, and also some of the larger Steadicam units for serious video shooters. We haven’t previously featured Domke bags, but the Next Generation line certainly should appeal to consumers at all levels that want something fashionable as well as practical.

“We’re very positive about the way 2016 seems to be shaping up, but of course, it’s too soon to make any firm predictions. If things go along as they have been, with an uptick in consumers looking for an experience they can remember, we think that a strong travel market bodes well for our unique establishment going forward.”

With the release of the long-rumored, full-frame flagship Nikon D5, and the companion DX-format Nikon D500, Nikon clearly hit a home run at CES 2016. The Nikon booth was packed with dealers and pros wanting to get them in their hands. With a full-resolution burst rate of 12 frames per sec with AF and 14 fps with AF on the first frame only, and a top ISO setting of 3.28 million (!), the $6,500 Nikon D5 is a real blockbuster that takes the DSLR to a new level. The D500, at just under $2,000 body only, is not far behind and will inevitably sell in much larger numbers.

To find out what’s up in Nikon Land, we went to the man that should know best, the charming Mark Soares, product manager of Nikon’s DSLR division.

“Frankly we were expecting a warm reception for these new cameras,” says Soares, “because they really push the envelope, but the response has been absolutely fantastic. Also, the joint intro was perfect because these two cameras complement each other to a remarkable degree. They both offer incredible improvements, including 4K UHD video recording at 24p, 25p and up to 30p in-camera along with an incredible full-res framing rate and huge buffer size, which may not be sexy but is very important to serious shooters.

“The D5 can shoot up to 200 uncompressed, full-res images on an XQD card, and there are two sub-models, one with a pair of XQD card slots, the other with a pair of CF slots.

“This landmark launch is also important for what is symbolizes,” Soares continues. “It’s a testament to what’s possible, and we believe it will revitalize the entire DSLR sector. If you look at actual sales figures, DSLRs still dominate mirrorless cameras, and this duo elevates the DSLR and validates that it’s still the top choice among pros and enthusiasts who want to get the most out of their gear.

“CES is the most important venue in the world with respect to technology, and I’m sure I’ll see a lot of cool, new stuff that complements our technology when I get a chance to walk around the show.

“By the way, we’re calling the D500 the flagship of the DX line, and we expect it to generate many times the volume of the D5. And you should really check out the KeyMission 360, our ultra-wide-view entry into the action camera category. We’re obsessed with image quality, and in the long run that always pays off. But for right now, I am extremely pleased with the ‘collective hurrah’ we’ve generated at CES.”