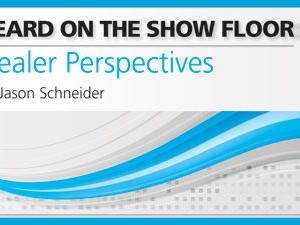 Robi’s Camera is a single-site photo specialty retailer located just south of Seattle. The area has a large military population, with McChord Air Force Base and Fort Lewis both nearby.

“We’re the West Coast’s only start-to-finish imaging center, offering a comprehensive range of photography classes and coaching, fine art and custom printing,” says Wolf. “We also carry a full line of DSLRs, point and shoots, and advanced lighting equipment, and our on-site photo lab offers a full menu of services. We skew toward advanced shooters, but our demographics are really across the board. DSLRs are our top sellers, with mirrorless system compacts and point and shoots vying for second place. Nikon, Canon and Pentax are our top-selling brands, and we see the real growth potential in compact cameras with superior image quality and versatility compared to cameraphones when it comes to taking pictures.

“Good examples of this trend are the Fujifilm X-series cameras, such as the X100S, X-Pro1 and X-E2, all high-performance compact cameras optimized for high-quality capture. Other growth areas are POV cameras, including the GoPro and its competitors, and image sharing via Wi-Fi connectivity in general. Tiffen’s new Steadicam Curve for the GoPro is definitely in tune with the times, providing a compact mass-market image stabilization device that will make a lot of people’s videos look better. It also points toward another trend: many serious shooters are moving beyond megapixel ratings and Facebook-level video into the realm of production-quality video.

“While 2013 was definitely challenging, 2014 looks to be better, and we’re planning to provide greater product diversity,” notes Wolf. “That’s why we came to CES,” adds Ron Austin, Robi’s president and CEO. “We’re here to find innovative items that will make our business more profitable in a rapidly changing environment. Indeed, only last week we could say to our customers, ‘Any of these new cameras can capture video better than your current screen or output device.’ After CES 2014 that’s all over—4K is the new standard!”

“Going forward, we plan to offer more services,” concludes Wolf, “especially classes to help build our core customer base. We’re also keeping a close eye on the much wider diversity of POV cameras, and all cameras with social media and NFC connectivity to better serve our customers’ needs.”

Mogil’s on the Mountain is a diversified photo specialty, electronics, TV/home theater, audio and home security retailer that’s been in business for 13 years. One of the reasons for its success can be inferred from owner and founder Jay Mogil’s business card, which describes him as “Owner/Nice Guy.” Behind his laid-back demeanor and impressive red beard, he is as sharp and savvy a retailer as you’ll find anywhere.

“We serve an upscale demographic with a combination of tourists and locals,” says Mogil, “and we carry a full line of Pentax, Leica and GoPro cameras, some Canon stuff, as well as Tiffen filters and Steadicams, Samsung TVs, Denon and Onkyo home audio, Klipsch speakers and many other photo and CE items. Generally, business has been quite good, and while Christmas was slow, late December and early January made up for it. I have a hunch our holiday sales would have been better, but we’re facing intense competition from online retailers—not on price, because our prices are very competitive, but convenience.

“Among the interesting items I’ve seen at CES so far have been the Domke Next Generation bags at the Tiffen booth,” observes Mogil. “They have a more contemporary style and cool new features like removable pockets, but they still have that old canvas feel of traditional Domke bags. There are certainly lots of new curved screen TVs at the show, but I’m not sure how far this technology will go. Also there are a number of quadra-pods, innovative tripods like the Davis & Sanford Attaras, scads of new remote control shooting accessories, and the new Steadicam Curve for the GoPro that feels even better than the Smoothie.

“Judging by my own seat-o
f-the-pants impressions, the importance of connectivity will continue to surge,” notes Mogil, “and future cameras will be smaller, faster, sharper and better. Cameraphones are not the answer, and compact and bridge cameras will take over from DSLRs as sensors improve and lens ranges get better. Two good examples of this trend are the Leica V-Lux 4, which has a huge zoom range and a constant f/2.8 aperture, and the Leica D-Lux 6 that I carry; it has a maximum aperture of f/1.4—great for low-light shooting. Both cameras deliver impressive image quality.

“Personally I haven’t seen as many wearable biometric devices and cameras as I expected (that may change as I cruise the show more), but I’ve seen a lot of small camera helicopters and photo drones, which are pretty cool. It’s clear 4K has become the video standard as output drives capture, and there’s a new 4K model from GoPro and the new AS100V 4K action cam for under $300 from Sony.

“2014 is shaping up to be a good year, as long as you’re adaptable, but in my opinion the only way for small photo specialty retailers to remain viable is to diversify into areas like home theater, TV and even cellular. You’ve got to branch out, offer great knowledge about the product and, of course, competitive prices and great customer service.”

While not dealers, and hardly your typical CES attendees, Barbara Lange and Peter Symes came to Las Vegas primarily to attend a special awards ceremony to receive a technical Emmy Award for SMPTE for creating working standards for serial digital interfaces. We asked them for their perspective on the show and consumer electronics technology in general.

“One thing that’s evident,” said Symes, “is that the clear distinction between consumer and professional equipment and end-use profiles is blurring. A good example is GoPro, a company that sells a lot of units one at a time to consumers but also makes a lot of money selling them 300 at a time to high-end cinematographers that use them as expendable image-capture devices to shoot action sequences on such things as surfboards, where if the camera drowns it’s no big deal. Another interesting thing is the ongoing dialog between output and capture, which is reflected in, for example, using 24 fps for a so-called cinematic effect with video. Technically, a faster framing rate is far superior, so this is really just an effect, a style.”

“In terms of trends,” observes Lange, “it’s clear that curved TV screens are all the range—the curve is in. I’ve also seen a lot of automotive connectivity, and we’re really moving toward the connectivity of everything. And with GPS built into so many devices, every device will know the exact location of every other device. We’ll be using imaging and other data streams to alter traffic patterns and transmit real-time medical data. It’s the grand convergence of everything, and I sure hope it will be better for us. Of course, the potential in saving energy by doing such things as automatically locating parking spaces or sequencing traffic lights could be quite impressive, but there are certainly privacy concerns, because the only way this all works is openness of communication.

“Of course, we are not here primarily as consumers of the products at the show,” continues Lange, “but a lot of our members, such as Tiffen, are deeply engaged in all aspects of consumer electronics, from manufacturing to retailing. That’s why it’s important as a professional association that we understand our members’ business environment, because it directly affects the services we provide.”