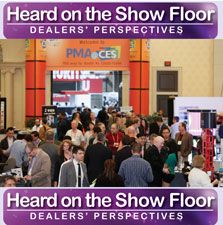 Established back in 1974, Bedford Camera & Video has steadily grown and is now a six-store enterprise with locations in Fayetteville, Fort Smith, Little Rock, North Little Rock and Rogers, Arkansas, and their newest store recently opened in Oklahoma City, Oklahoma. The non-store head office is in Springdale, Arkansas (home of the original store), around 10 miles from Fayetteville and Rogers. Bedford, a member of PRO, serves a diversified customer base of family shooters and prosumers, and a smaller number of pros.

“What sets us apart is that we provide added value to our consumers,” said Austin Pittman. “We offer free classes to people who buy cameras and paid classes on subjects ranging from Intro to Photography 1 and 2, a crash course in Point & Shoot, plus Macro, Photoshop and now Video classes, which have really taken off. We’re big on DSLRs, too, a growing category where we feature Nikon, Canon and Sony models.

“Basically we come to CES and PMA to meet with vendors and try to find new niche products for our stores,” Pittman said. “For example, at the Tiffen booth we’ve been looking at Lowel lighting accessories and also checking out the new Domke bags, which still have that distinctive pro look but now incorporate contemporary compartment and organizing systems. Of course, we carry ProMaster tripods, filters, lens caps and remotes, but we’re always on the lookout for new stuff.

“In terms of cameras, we’re looking forward to seeing the Nikon D5200 and the latest mirrorless CSCs, including the Nikon 1 V2 and Sony NEX-6 that attract a younger demographic. DSLRs are still our strongest camera category, but we also do a good job with enthusiast-aimed models like the Canon G1 X.

“Trends? Video in DSLRs is coming on strong, and action cameras like the Contour are selling quite well to young, active lifestyle shooters like canoers, bike riders, skydivers and skateboarders. The more of those guys we can get into our stores, the better!”

Family-owned Paul’s Photo, established in 1961, is a medium-sized (3,500 square foot) single-location photo specialty retailer located in upscale Torrance, California, serving the greater Los Angeles area. Its customer base ranges from enthusiasts to family shooters and prosumers, and Paul’s is a leader in promoting photo classes and hands-on photo adventures.

“We treat every customer, employee and student like family,” noted Mark Comon, “and that’s one of the keys to our success. Another is that we’re proud members of PRO. We were recently honored as PIR’s 2012 Dealer of the Year, so we must be doing something right!

“We come to CES and attend DIMA and PMA seminars because we want to learn from some very smart people, and interface with successful people who have fresh ideas,” said Comon. That’s one of the most effective ways to learn to grow our business. CES and PMA provide opportunities to check out new project categories that can expand the reach of what we sell and the services we offer to our customers. Sometimes it’s a small thing like the robust BriteCase for iPhones that has a panel we can imprint with the customer’s favorite photo.

“We also attended a seminar given by Will Crockett on hybrid photography, an expanding trend that includes a still, video and audio component in everything people capture. Since all DSLRs are now video cameras, the idea is to use the full capability of the camera at all times. This will tend to diminish the role of flash in favor of continuous light sources like LED lights.

“As for PMA, it’s a shame that some photo companies aren’t there,” observed Comon, “and that there’s too much noise around CES. They need to tell the story about sharing and motivation—that photography is not all about bigger, brighter and more megapixels, that it’s really about memories and emotions. Having said that, CES is a great place to look for ‘secret squirrel’ items that are outside the traditional photo industry but have potential in our store.

“Being a PRO member has certainly been helpful in that regard, because by sharing with other retailers we can bring new products into our universe. 2013 is shaping up to be a great opportunity: this Christmas was quite good, and we did more business in the first week of 2013 than any year I can remember.

“What I’m really looking for is a new marketing model for reaching younger customers. We need to figure out how to get under-30 consumers through our doors instead of going online or to Best Buy. I’m going to walk every hall of the show to find ways of monetizing this idea and bringing more value to our customers.”

Creve Coeur, a photo specialty retailing chain serving a consumer-to-prosumer customer base, has been in business for more than 30 years and has 10 locations in the Midwest, the newest located in Springfield, Illinois. Their buyer, Larry Etcheson, has been in the industry since 1974, and we caught up with him at the Wynit booth.

“We come to CES every year to see and handle the newest lines of cameras and to select those models that suit our customer base,” said Etcheson. “For example, we’re looking forward to seeing the Nikon D5200 and the latest DSLRs, compact system cameras and Cyber-shots from Sony. We deal directly with Nikon, Canon, Pentax and Tech Data, but we work with Wynit when it comes to Epson printers and Ilford paper and chemistry. We still do a robust business in black and white in the Midwest, and we have a central processing lab at our main location in Creve Coeur. We’re also here checking out the latest accessories, such as filters, camera bags, memory cards and, of course, lenses. We’re a big Sigma dealer and you can be sure we’ll be looking at their latest offerings.

“If you’re a photo specialty buyer, you really have to come to CES to stay abreast of the latest trends and check out what’s new. This is really it since PMA has been scaled back. Yes, we are definitely heading over to the LVH to walk the halls of PMA@CES and shake hands with some old friends.”

Robi’s Camera Center, Labs & Custom Framing is a large, 4,500-square-foot, single location, photo specialty store covering a wide demographic, ranging from family shooters to prosumers and “a lot of mammarazzi—Wolf’s colorful expression for the rapidly expanding ranks of female photographers. “Lakewood, Washington, is kind of like a Seattle-based Tahoe,” Wolf wryly observed, “with a curious mix ranging from severe upscale mansions and castles, to transitional and questionable neighborhoods. However, our metro area draws from a population of around 2 million and we’re the only store of our kind between Seattle and Oregon.

“We come to CES to catch up with the manufacturers we know and whose equipment we sell, but we’re always on the lookout for innovation,” said Wolf. “These days that means communications added to photos, a concept that entails both convergence and divergence. We’ve been leaving photo behind and moving into image for some time, but that trend is accelerating, and we are constantly seeking ways to monetize that growth. One way is to print on materials such as metal, stone and cloth, and moving to a business model based on a $40 8×10 rather than at $5 8×10. Dye sub is a big part of that.

“At the Tiffen booth, we were encouraged to see the next-generation Domke bags that incorporate innovations to transform the old standard to meet the demands of the new market. By adding technology like variable Velcro dividers to the traditional soft field bag concept and refreshing the styling, the Domke line is much more attractive to dealers and consumers. We’re also impressed that glass filters, still strong in polarizers and variable ND filters, are being supplemented by convenient, intuitive digital filter effects, with Dfx picking up the slack very effectively. Another upmarket product category is small HD POV cameras aimed at skiers, skateboarders, and artists that want to shoot cool videos.

“We’re going to get over to the LVH to touch base with old friends at PMA, but we’re not expecting much that is really new. PMA will have to continue to integrate new tech to turn itself around. As for 2013, I think the most encouraging trend for brick-and-mortar stores is the resurgence among consumers who value service and quality, with price relegated to third place.”